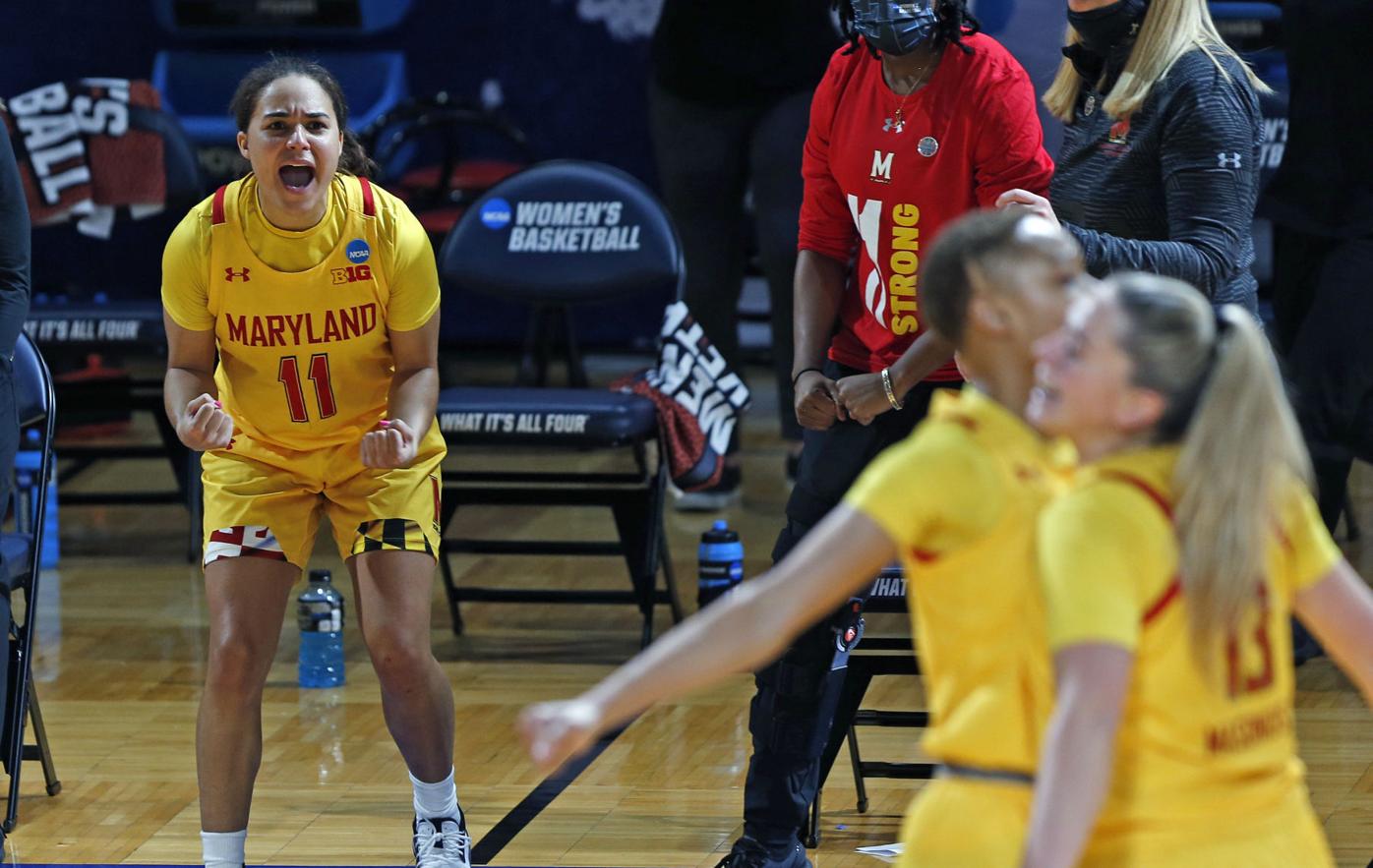 Maryland guard Katie Benzan (11) cheers on the reserves during the second half of Wednesday’s 100-64 second-round victory over Alabama. 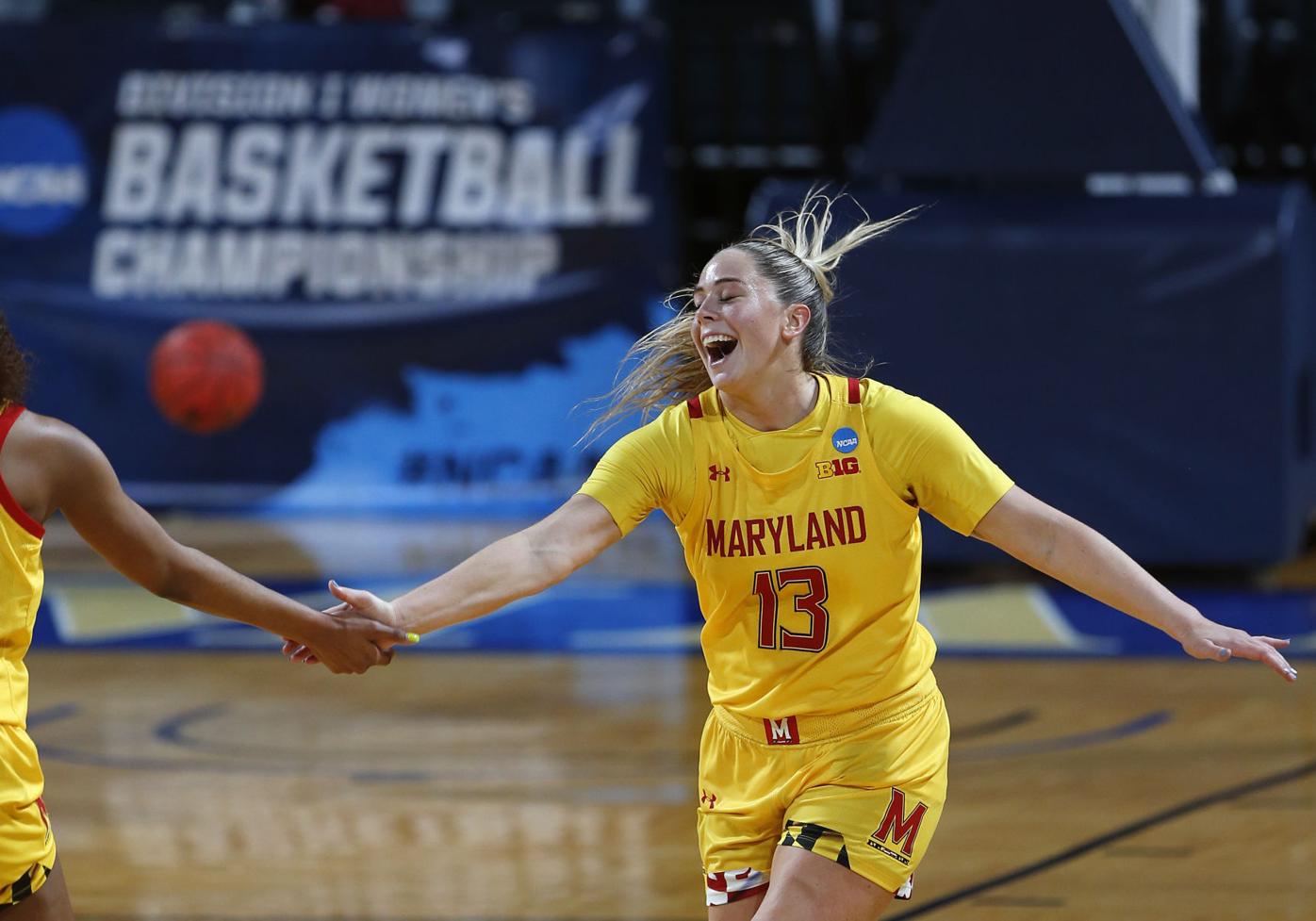 Maryland guard Faith Masonius (13) is congratulated after scoring during the first half of Wednesday’s second-round game against Alabama.

Maryland guard Katie Benzan (11) cheers on the reserves during the second half of Wednesday’s 100-64 second-round victory over Alabama.

Maryland guard Faith Masonius (13) is congratulated after scoring during the first half of Wednesday’s second-round game against Alabama.

SAN ANTONIO (AP) — The Maryland Terrapins are ruthless and relentless on offense and rolling once again into the Sweet 16.

Angel Reese scored 19 points, leading a wave of scoring off the bench, as No. 2 seed Maryland and its offensive juggernaut overwhelmed No. 7 Alabama 100-64 on Wednesday in the second round of the women’s NCAA Tournament.

“It showed the balance of our team and the depth that we have,” Terrapins coach Brenda Frese said.

And just how scary this bunch may look to the rest of the tournament field.

The Terrapins (27-2) came into the tournament with the nation’s highest-scoring offense and have yet to take their foot off the gas. The Terps are averaging 99 points in their two tournament wins after scoring 91.3 per game in the regular season.

Maryland hit the 100-point mark for the seventh time this season and got 46 points off the bench. The Terps were so dominant, season scoring leader Ashley Owusu didn’t make her first basket until the lead was already 46-23 in the second quarter. Five Maryland players scored in double figures.

“Obviously its fun when you’ve got your bench coming out and destroying,” said reserve Faith Masonius, who added 16 points. “That’s a championship team right there.”

Jasmine Walker led Alabama (17-10) with 23 points. Jordan Lewis who had 32 points, and 11 rebounds and eight assists in Alabama’s first-round victory, had eight points, two rebounds and one assist against Maryland’s defensive pressure.

The Terps ran to a 30-9 lead after the first quarter, shot 68% over the first half and scored in every possible way. Mimi Collins scored her team’s first nine points. Maryland made four consecutive 3-pointers and Alabama looked bewildered just trying to find the ball.

“They are just really hard to guard. They are so good offensively and we just really didn’t have an answer,” Alabama coach Kristy Curry said.

By the second quarter, Maryland was pushing the ball inside for Reese, whose power moves and scoop layups in the post propelled a 24-point second quarter that built a 54-25 lead by halftime. Alabama paid for every mistake: Maryland turned 11 turnovers into 18 points in the first half.

Alabama finally showed some life to start the third quarter. Maryland missed its first two shots and consecutive 3-pointers from the Crimson Tide cut the lead to 22.

That was enough for Frese, who won a national championship in 2006. After Frese called timeout, the ball pressure and quick ball movement returned and a 7-0 run with a 3-pointer from Chloe Bibby had the lead back to 29 in a blur.

“Today was about emptying the tank,” Frese said. “We wanted to go hard, and play hard for 40 minutes.”

Maryland advances to play the winner of Wednesday night’s Hemisfair Region matchup between No. 3 UCLA and No. 6 Texas.

Maryland and Alabama squads met in the second round of an NCAA Tournament for the second time in less than 48 hours, with an opposite result. The second-seeded Alabama men blew out the 10th-seeded Terps 96-77 in Indianapolis on Monday night.

Despite being overwhelmed, the Crimson Tide may be building something in Tuscaloosa. Alabama hadn’t been to the tournament since 1999. Curry has now taken three programs to the NCAAs, including Purdue and Texas Tech. She led the Boilermakers to the national title game in 2001. She may have some rebuilding to do, as the Tide started three seniors.

“We did stuff that people weren’t able to do in 20-plus years. My senior year we made history,” Walker said. “That’s what I’m most proud about.”

Elle Ruffridge had a career-high 20 points with five 3-pointers, Jasmine Franklin had a double-double and fifth-seeded Missouri State is going to its second consecutive Sweet 16 after knocking off Wright State.

The Lady Bears (23-2) pulled away in the second half when Ruffridge had 17 of her points. Franklin had 11 points and 11 rebounds.

Ruffridge and Franklin are among nine current Lady Bears who were also part of the Sweet 16 team two years ago that lost to Stanford, the same team they will play in the Alamo Region semifinal Sunday.

Missouri State went ahead on two tiebreaking free throws by Brice Calip with 2 minutes left in the second quarter before Mya Bhinhar swished a 3-pointer for a 24-19 halftime lead. Sydney Manning’s 3-pointer capped a 12-3 run to start the second half. That trio was also on the last Sweet 16 team.

Angel Baker and Shamarre Hale each had 10 points for the 13th-seeded Raiders (19-8), who got outscored 40-20 after halftime.

Sabally scored six straight points — including a putback of her own missed shot — to break open a tie game and give the Ducks a 54-48 lead with less than a minute to go. She finished with 15 points, including 10 in the second half, and nine rebounds.

Oregon (15-8) is in the tournament for the 16th time overall, but this Ducks team came in less heralded than those led by Sabrina Ionescu, who missed out on her final chance at a national title last year because of the pandemic. Louisville or Northwestern awaits Oregon in the regional semifinals.