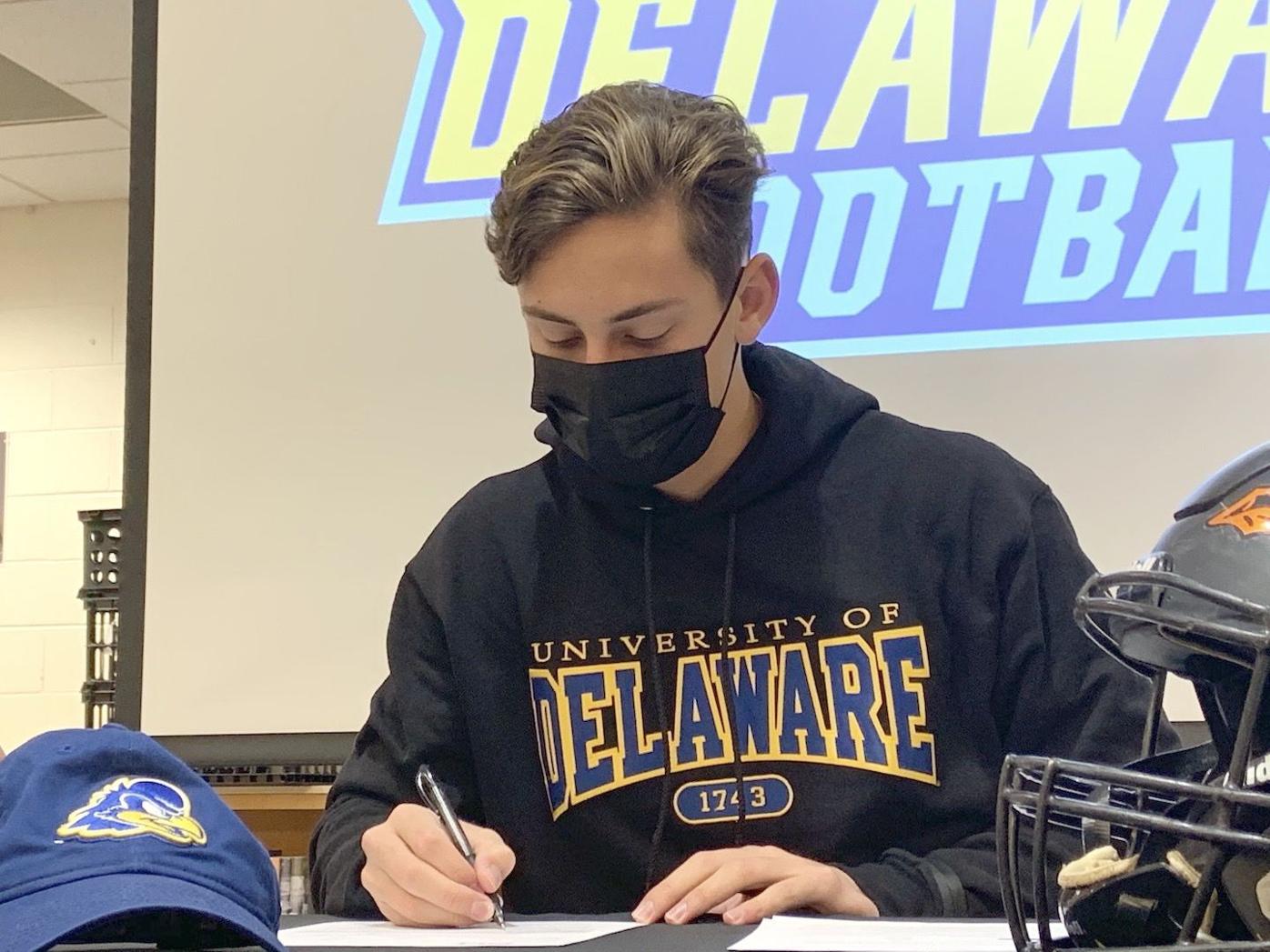 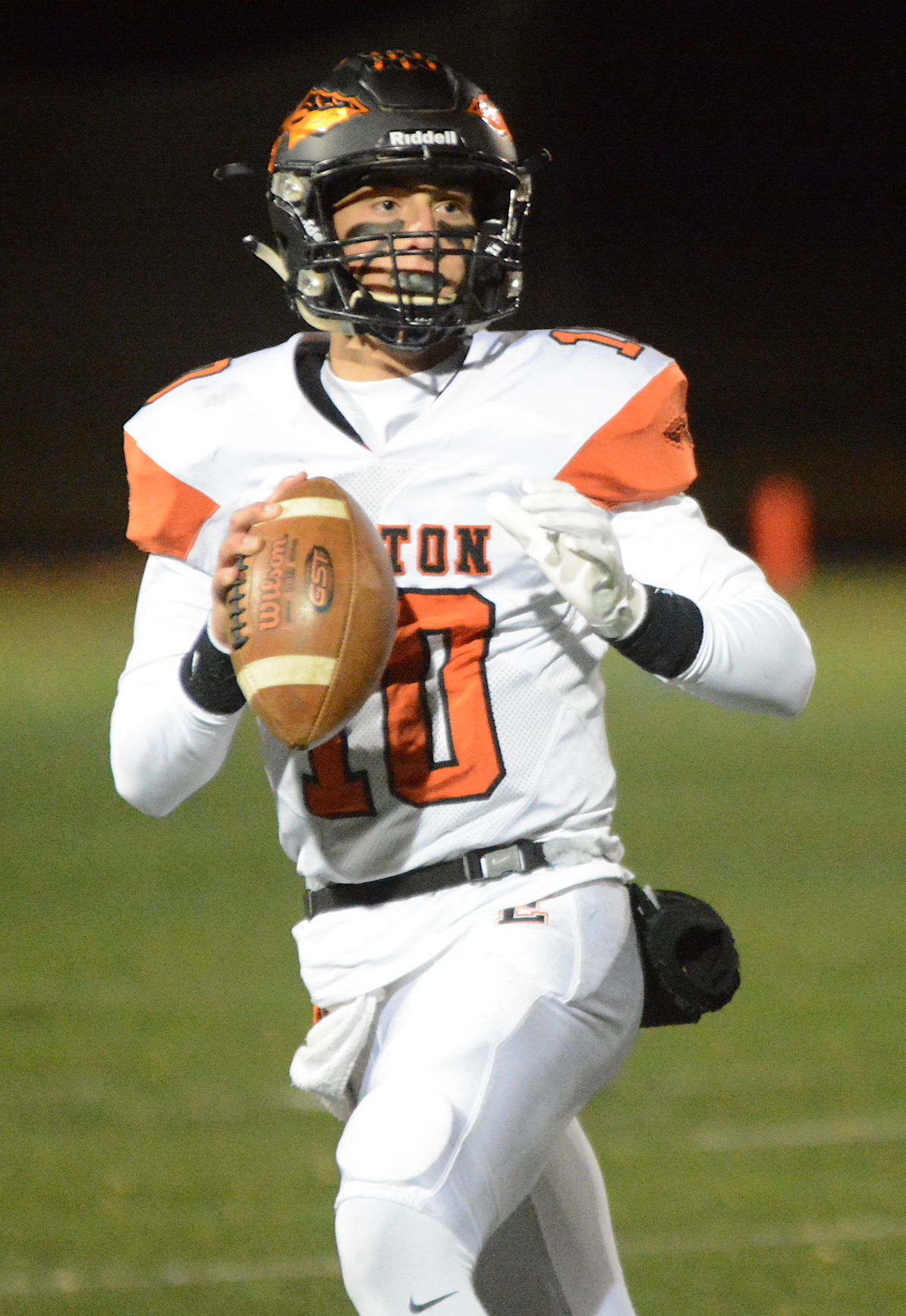 Ryan O’Connor has thrown for 4,373 yards and 52 touchdowns during his two years as Easton’s starting quarterback. 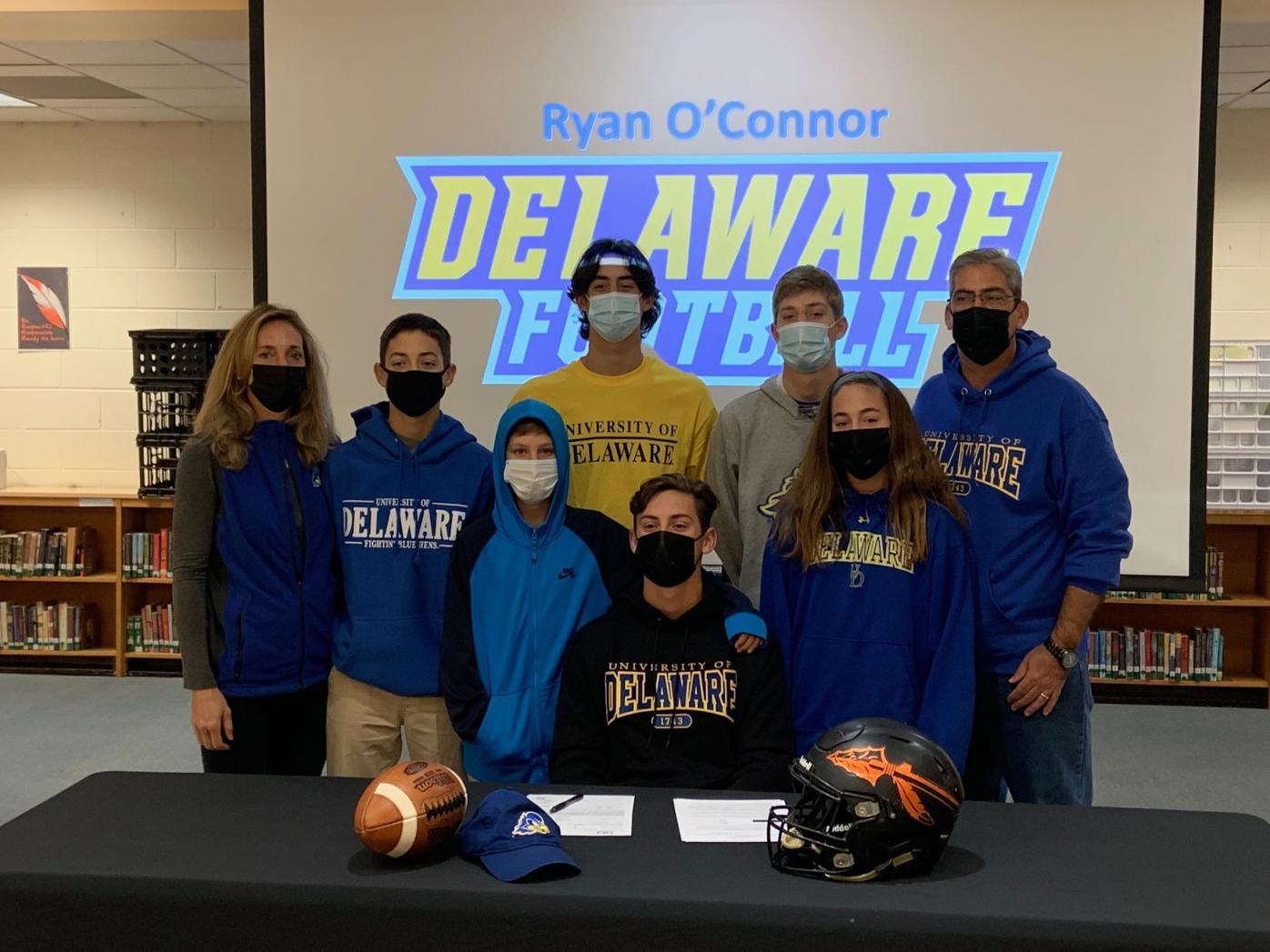 Ryan O’Connor has thrown for 4,373 yards and 52 touchdowns during his two years as Easton’s starting quarterback.

“I did not fall asleep for awhile (Tuesday night). I woke up and it was game day,” O’Connor said. “It’s the first time I’ve woke up with that feeling in awhile. It was awesome. I was really excited last night.”

Though he didn’t have a game to play, O’Connor had plenty to be excited about early yesterday morning, when he signed his national letter of intent to play football at the University of Delaware next fall.

“This is crazy,” O’Connor said with a huge grin after signing his letter inside Easton High’s library under the gaze of his family, Easton head football coach Pat McGlinchey and athletic director Kurisha Hoffman. “I’m not surprised that I’m here, but it’s surreal. But I know I worked for it. I definitely wouldn’t be here without all my coaches and my teammates and my family and friends, and most importantly God. Thank you for putting me in this position.”

O’Connor said he was in elementary school when he began thinking about one day being in a position to play college ball.

“I was playing (youth football) for the Talbot Braves and I would rush home every Saturday to watch all the (college) games,” O’Connor said. “And it just kind of went from there. I’ve always had a dream of playing big-time college football. And ever since I can remember I’ve been working for this. I could see myself on that big stage. Just bright lights, everything.”

The 6-foot-3, 190-pound senior said the draw of those bright lights helped sway him to pursue football over basketball and baseball.

“There’s something about the fall nights, walking down those steps, down to the stadium, hearing (AC/DC’s) ‘Hell’s Bells’ ring, and the crowd going crazy and everything,” O’Connor said. “It’s just something about it I can’t explain.”

There was also something about Delaware, and O’Connor took the time to explain that.

“They were the first school to really take me seriously and give me an offer,” O’Connor said of Delaware, which has produced NFL quarterbacks Joe Flacco and Rich Gannon. “I felt their coaches were honest with me throughout the entire process, more so than any other school. And it’s what I’ve always wanted. It’s a big-time football school, and it’s the biggest stage I could get on with still having a great education. I’m just looking forward to getting up there and getting to work.”

“I’ve had a lot of great athletes that I have been able to coach prior to being a head coach,” said McGlinchey, who has been coaching high school football for almost 20 years and is entering his third season as Easton’s head coach. “But I would say, Ryan is by far, in my opinion, the best quarterback that I have ever been a part of. You know we’ve had some great quarterbacks but you know Ryan is in the new game of the spread offense. He is a great quarterback.”

That may never have been more evident than in the final regular-season game of the 2019 season, when O’Connor directed the Warriors on a 91-yard touchdown drive with 1 minute, 53 seconds remaining and no timeouts against arch rival Cambridge-South Dorchester. Easton’s quarterback ran four yards for a touchdown then threw a two-point conversion pass to Shawn Warner with 18.3 seconds left to forge overtime, where the Warriors pulled out a 40-34 victory to seal a Class 2A East Region playoff berth.

“The biggest thing about Ryan is his character more than anything else,” McGlinchey said. “Because he has such great character he is able to really associate and talk to anybody. He is a great leader.

“It just shows the extra work that he put in,” McGlinchey continued. “He worked out with a private coach (Chris Baucia of the Football Factory) for a few years. It helped him tremendously become a better quarterback with reading defenses and worked on his throwing, and most major his footwork. It really shows his dedication to the game.”

O’Connor hopes to show his talents one more time later this school year when an abbreviated football season is scheduled — if the coronavirus pandemic has abated. After a Zoom meeting with Delaware’s coaches yesterday morning, O’Connor and Warrior head basketball coach Dionte Hynson playfully debated what offered more emotion, the football team’s pregame walk down the stairs or Easton’s student section working the home gym into a frenzy during the basketball season.

“Football, it’s just the best game in the world,” O’Connor said, laughing while Hynson quietly campaigned for basketball’s student section as the greater emotional charge. “And I love my basketball and baseball. But there’s nothing like a Friday night in the fall, just going out there with your boys and playing in front of all the people you know, in front of your hometown and just going crazy.

“I just want to play football again,” O’Connor added. “Hopefully we get to do that here. I definitely want to finish out here because we have some unfinished business. Hopefully we can finish here and then I can get up to Newark and ball-out.”