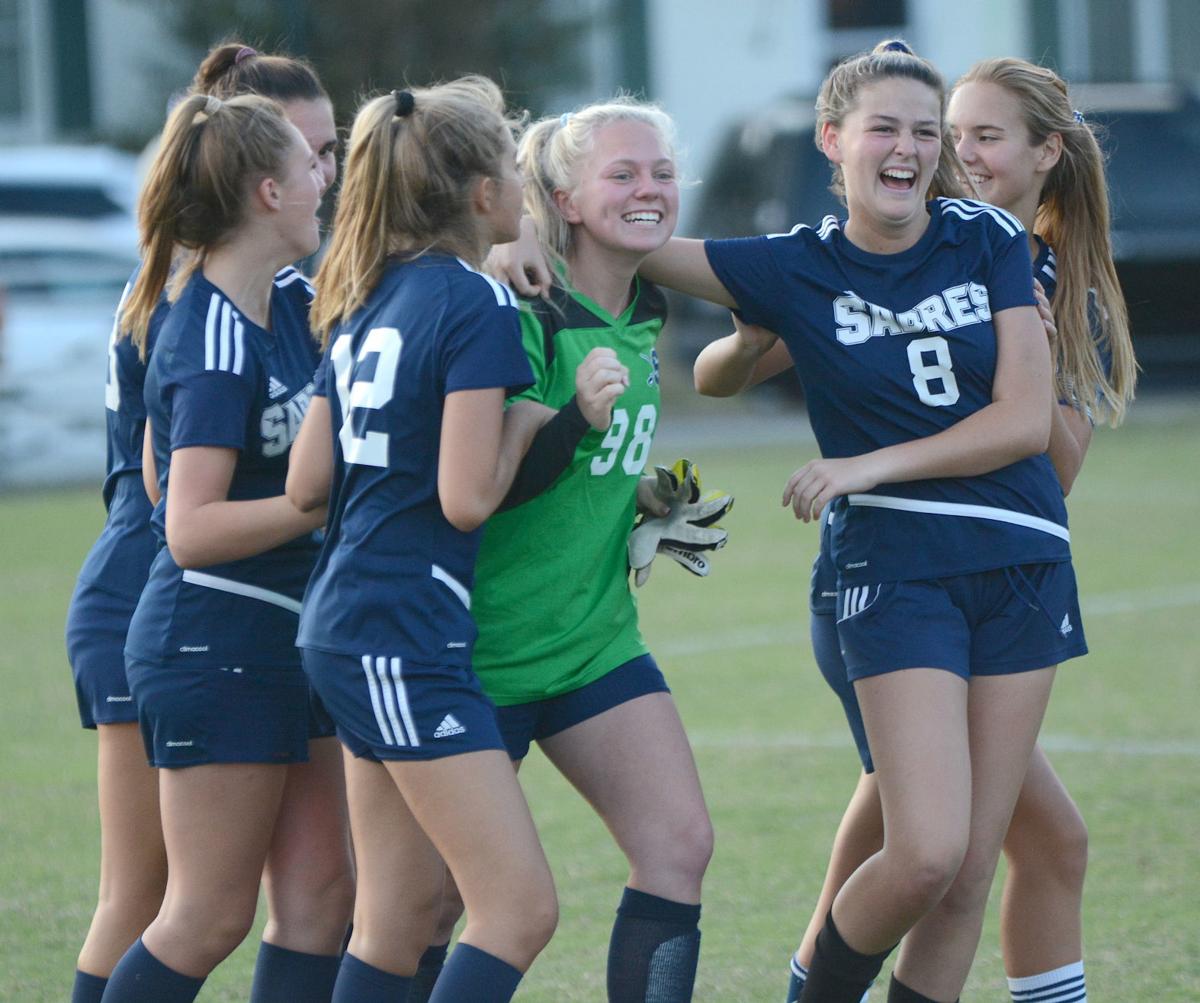 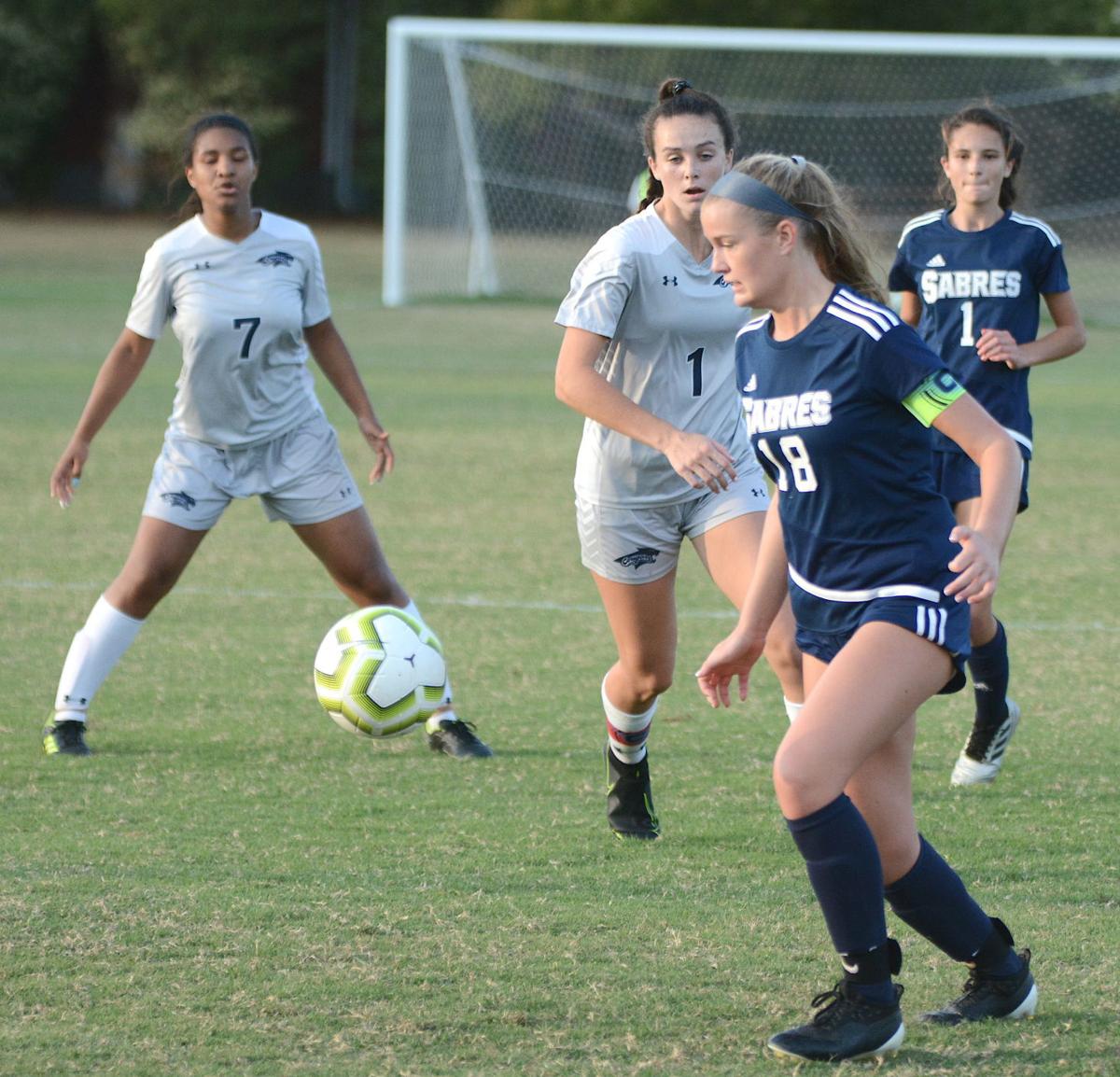 EASTON — It wasn’t an accident, fluke, luck or miracle.

It was practice, just like all those attempts she swung her leg through time after time from between 25 and 30 yards out.

And on this day, there was simply no defending it.

Saints Peter and Paul High’s Leila Robinson struck a ball from about 30 yards out on right wing and watched it bull’s-eye trajectory travel over the outstretched arms of the opposing keeper before nestling into the upper left corner with 29 minutes, 30 seconds remaining Monday to break a 1-1 tie and help the Sabres to a 4-1 victory over Calverton.

“Every day. She shoots like that every single day and it’s finally paying off,” Kile said of Robinson.

Through the opening 40 minutes, Sts. Peter & Paul (7-3) wasn’t playing like it had in most games this season. The Cougars kept the action in the Sabres’ defensive end for the majority of the first half, and took a 1-0 lead 4:10 before halftime, when Kierra Fields chipped a shot from about 20 yards out that floated over the head of Sabres’ freshman keeper Sarah Krochesky.

Krochesky made a stop off a Calverton corner early in the opening minutes of the second half, before the Sabres started increasing the heat on the Cougars’ net.

Robinson hit a shot that was handled by Calverton’s Alexia Ricchiuto, who took over in net for Carrino in the second half. Morgan Earls broke in down left wing, but Fields toed the ball away. Shilling then hit a shot that seemed to freeze Ricchiuto and settled into the back of the net with 33:33 left for a 1-1 tie.

A little more than two minutes later, an obstruction call against the Sabres set up Carrino for a direct kick from just outside the box, but her shot sailed well over the goal.

Less than two minutes later, Robinson got possession on right wing and hit a beautiful left-footed shot into the far corner for a 2-1 lead.

“We had our sideline talk and we really started to realize even though it isn’t an in-conference game we just needed to get our stuff together,” Robinson said. “And then me and Caroline started doing through passes. We just started working better as a team.”

Not quite two minutes after Robinson’s go-ahead strike, Shilling was taken down inside the box and awarded a penalty kick, which she calmly tucked into the right side of the net for a 3-1 advantage.

“We’re really not a Monday kind of team,” Kile said with a laugh, referring to her team’s first half. “We don’t like to do a lot of things on Monday. And this being a make-up game, I think that had a lot to do with it. It was the week after spirit week, homecoming, everyone’s just kind of like, this was going to be our Monday to chill.”

Robinson capped the scoring with a shot that was initially stopped by Ricchiuto but spun into the net for a 4-1 Sabres cushion with 24:37 remaining.

Sts. Peter & Paul continued its pressure, but with 17:30 left, Carrino just missed cutting Calverton’s deficit in half when she blasted a shot that banged off right post before tumbling over the end line. The Cougars had another opportunity three minutes later, when a loose ball bounced through the box before Krochesky retrieved it and cleared.

“Having to come out and actually put in some work, I don’t think they were ready for it at first,” Kile said. “And then they woke up, came back and played how they know how to play. So it was much better second half.”

Ryleigh Jordan had a goal and one assist for Queen Anne’s County, and Jurnee Wilson picked up an assist. Bre Athey and Olivia Slack shared the shutout.

WORTON — McKenzie Mogel had a hat trick and a pair of assists, and Lily Dixon scored twice and set up four goals to pace the Buccaneers.

SHILOH — Julia Hammons, Erika George and Corinne Meade each scored two goals as the Warriors pushed their record to 7-4, 4-2.