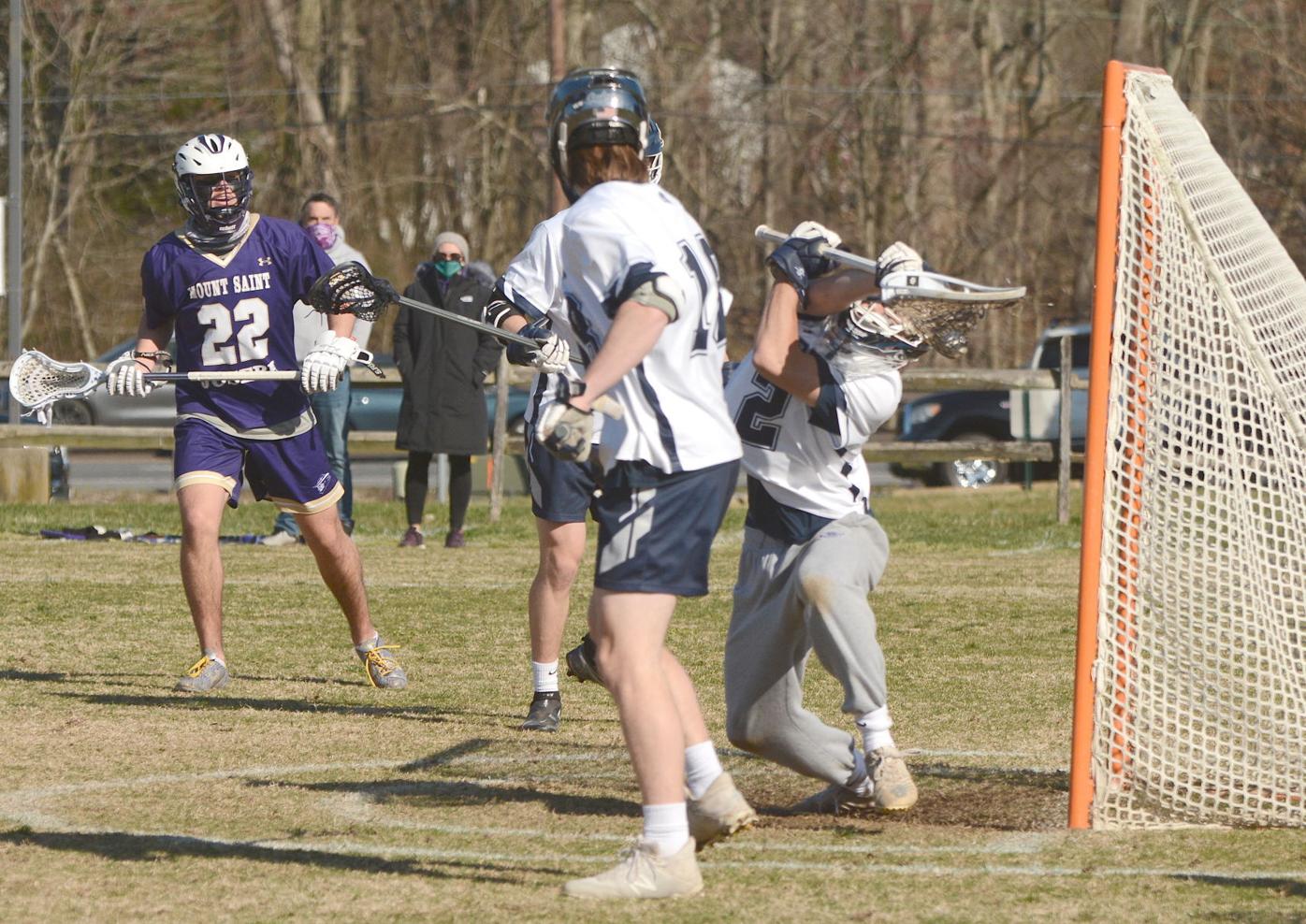 Saints Peter and Paul goalie Sam Heister eyes the ball in the webbing of his stick after a save in the first half of Friday’s game against Mount St. Joseph. 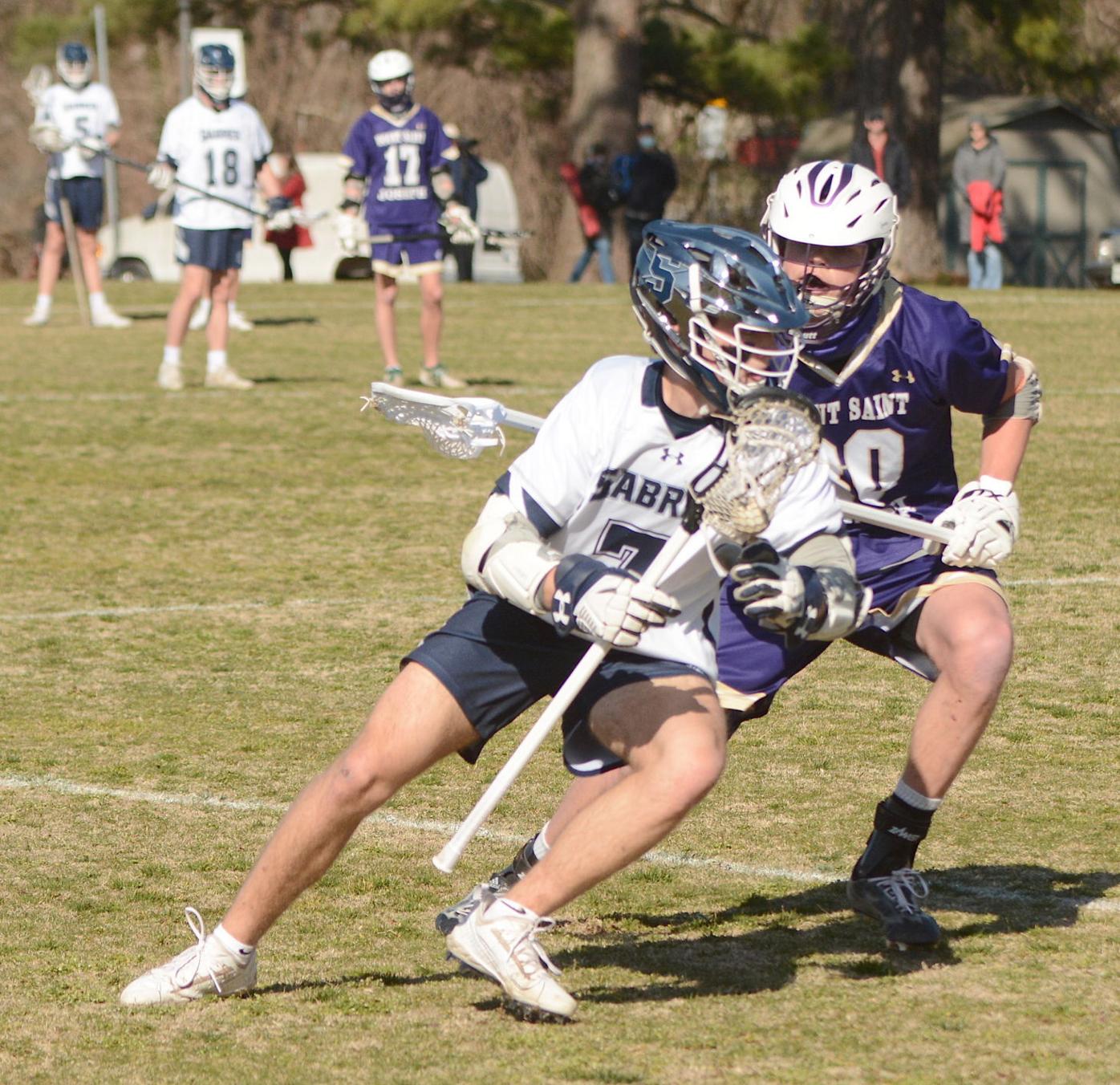 Saints Peter and Paul goalie Sam Heister eyes the ball in the webbing of his stick after a save in the first half of Friday’s game against Mount St. Joseph.

If Friday afternoon’s clash with Mount Saint Joseph’s was any type of indicator, the Sabres have something pretty sturdy to lean on.

Though Sts. Peter & Paul — a Maryland Interscholastic Athletic Association B Conference school — lost 5-2, Tracy was encouraged by his defense, which blanked Mt. St. Joe’s in the first quarter, and limited its MIAA A Conference opponent to just one goal in the third and fourth quarters.

“Coming into the season I knew our defense was going to be very good,” Tracy said after his team fell to 1-2. “We’re playing extremely well down at that end.”

The Sabres killed off a man-down situation, watched goalie Sam Heister log four of his 16 saves in the first quarter, and carried a 1-0 lead into the second period after Kyler Krewson launched himself in front of the goal and squeezed a shot past Gaels goalie Tommy Wilk 4 minutes, 15 seconds into the game.

“Sam’s a rock in the goal,” Tracy said. “He’s been great all year for us. He’s been making a ton of saves. He’s athletic; makes plays in the goal. He makes plays outside of the goal. And I think he’s going to be one of the better goalies in our conference. It’s nice to have a guy back there where we know at the end of the day he’s going to make big saves for us, but that he’s also going to be able to make plays outside the goal.”

But the Gaels (1-0) delivered an impressive defensive performance as well. Mt. St. Joe’s killed off all seven of the Sabres’ man-up opportunities, while Wilk made 20 saves and surrendered just one goal over the game’s final 43:45.

“Our defense did a great job,” Gaels head coach Tyler Reid said. “I thought they were aggressive. They disturbed the opposing team’s offense and they played really tough. They won the game for us today.

“Our goalie, Tommy Wilk was phenomenal,” Reid continued. “He’s the quarterback back there for our defense. He showed in my opinion why he’s one of the best goalies around. And I think that confidence helps build our defensive confidence as as whole.”

Mt. St. Joe’s pulled even with 5:44 remaining in the second period when Finn Schmidt wheeled around from the back of the net and flicked a shot past Heister. A little less than three minutes later, Schmidt fed Cory Meyers for a goal and a 2-1 lead. The Gaels almost increased their lead 20 seconds later, but Heister made a huge, point-blank stop to keep it a one-goal difference.

Mt. St. Joe’s continued pressuring the Sabres end, and with 1:53 left in the first half widened its lead to 3-1 on Will Bateman’s goal.

The Gaels were penalized six times in the third period, but the Sabres couldn’t capitalize as Wilk continued stopping everything thrown his way.

“We had a number of man-up situations and I give credit to their goalie,” Tracy said. “That’s something that we need to continue to work on is just finishing our opportunities. The hardest thing on offense is to create them. We did a pretty good job of creating them. We just got to finish them. We need to take our time, find a spot, and put it in the goal.”

Mt. St. Joe’s did just that with 1:10 left in the third when Jack Spears converted a Bateman feed for a man-up goal and a 4-1 lead.

Sts. Peter & Paul responded immediately, as Messick won the ensuing faceoff, raced downfield and scored past Wilk for a 4-2 deficit.

But the Gaels restored their three-goal lead with 7:53 left in the game, as Myers set up Schmidt for the game’s final tally.

“Sometimes you’ve got to have a tough one, and I give their team a lot of credit,” Reid said of the Sabres. “They’ve got a lot of talented players. And I think they were very, very impressive on the offensive side of the ball. They can make some good things happen.”

Tracy agreed, but knows it’s going to take some time.

“I think our offense will come along,” Tracy said. “I think we’ve got some guys who are continuing to develop. We’ll get there. But our defense, we’re going to lean on them until we get to the point where we’re putting the ball in the back of the net like we should.”