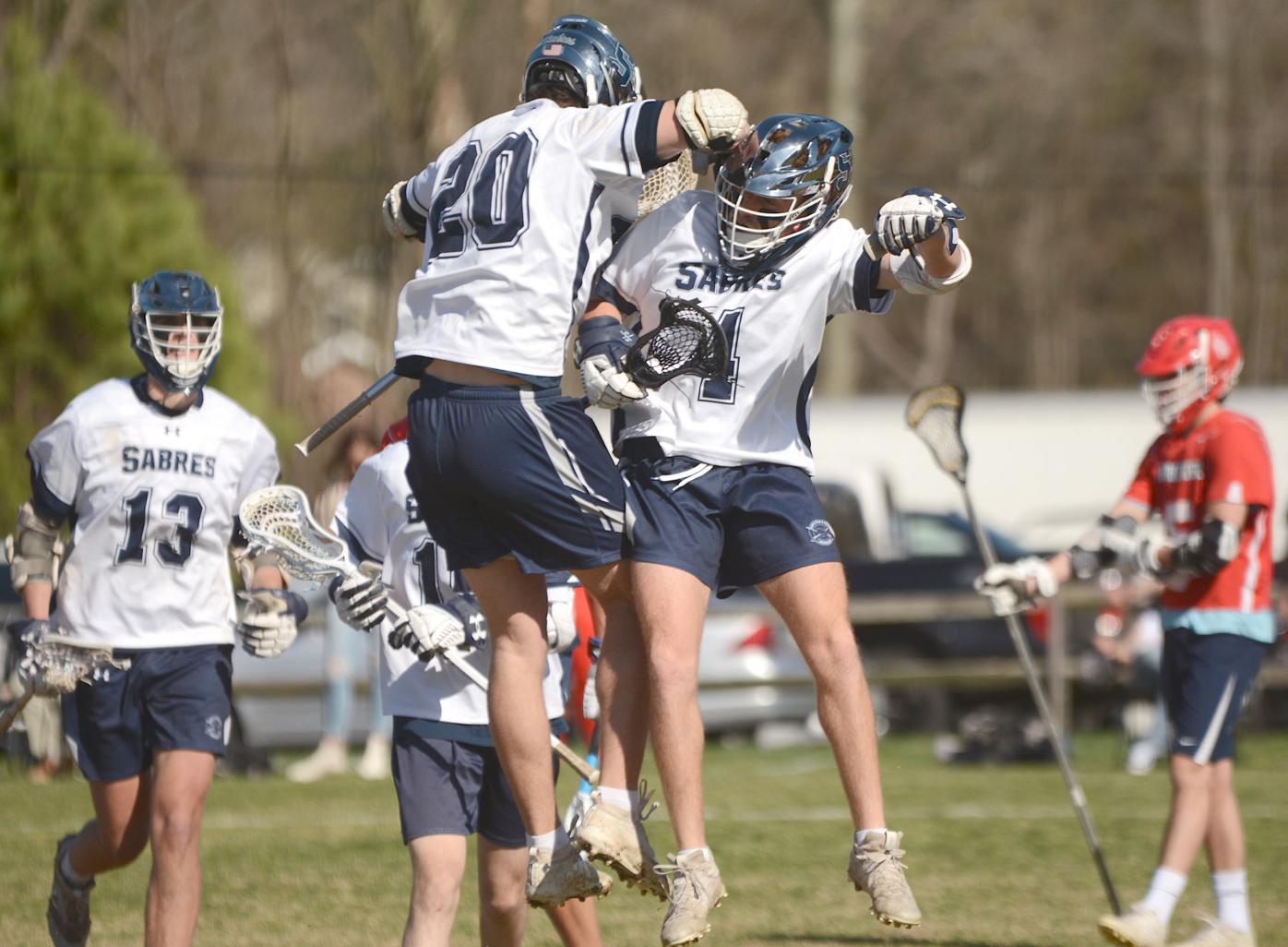 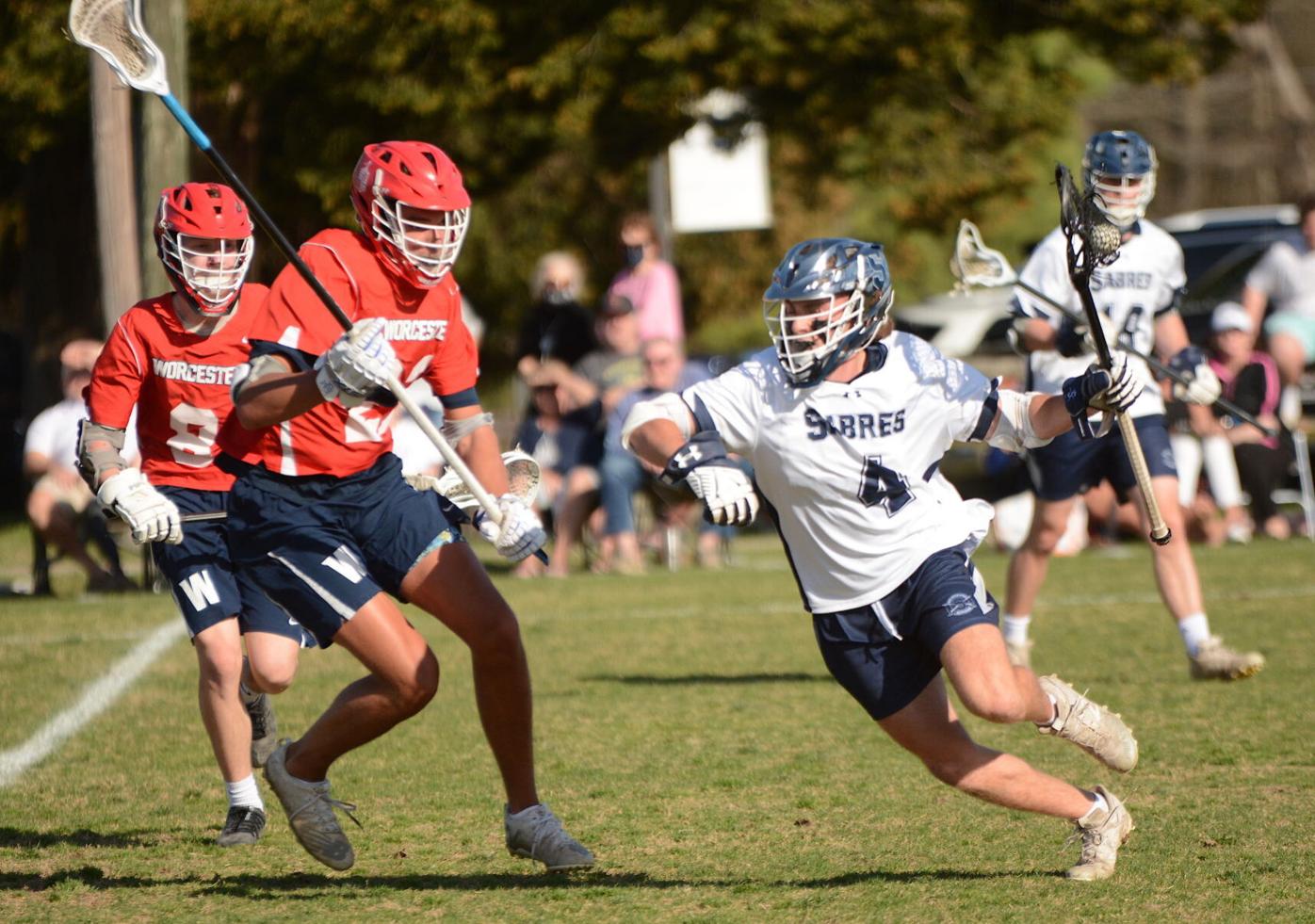 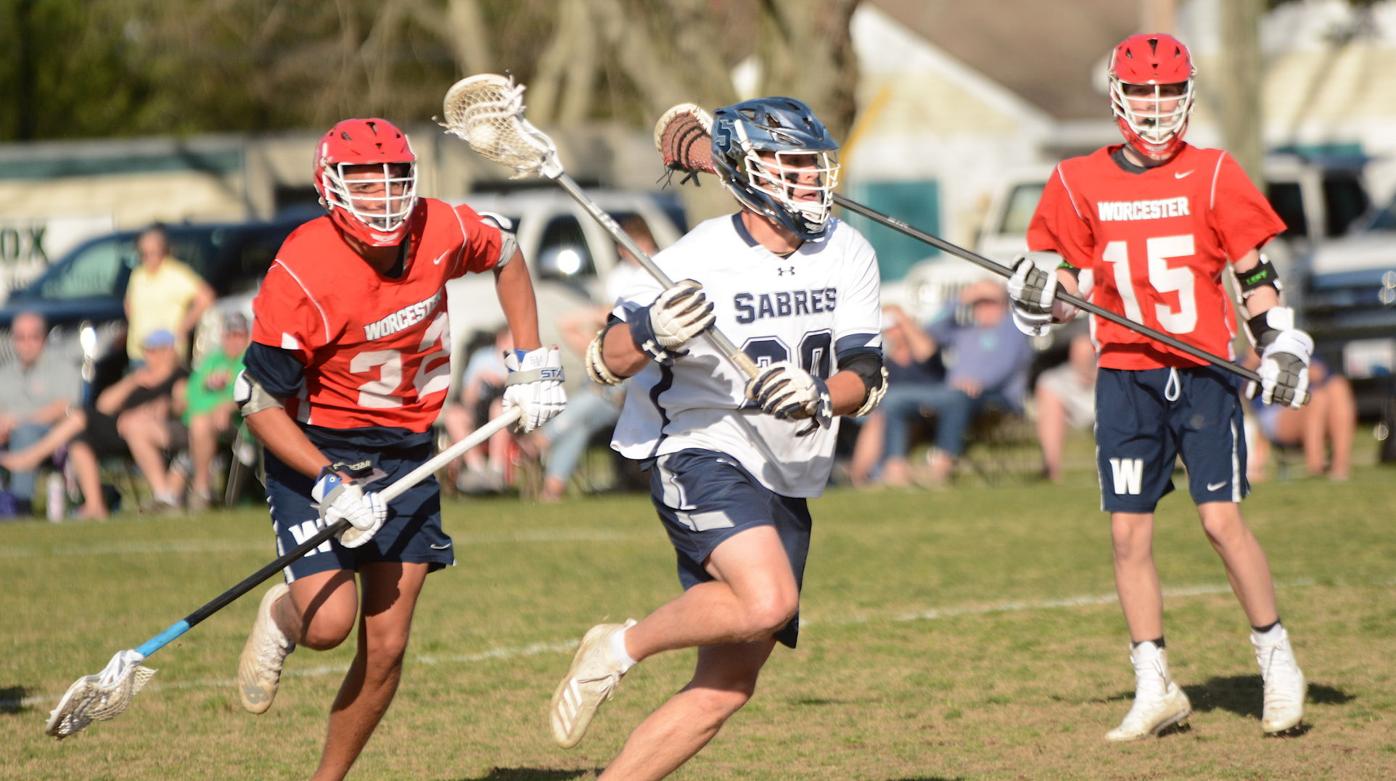 Saints Peter and Paul senior attackman Cory Morgan (20), who had four goals, drives toward the goal during Friday's second half against Worcester Prep. 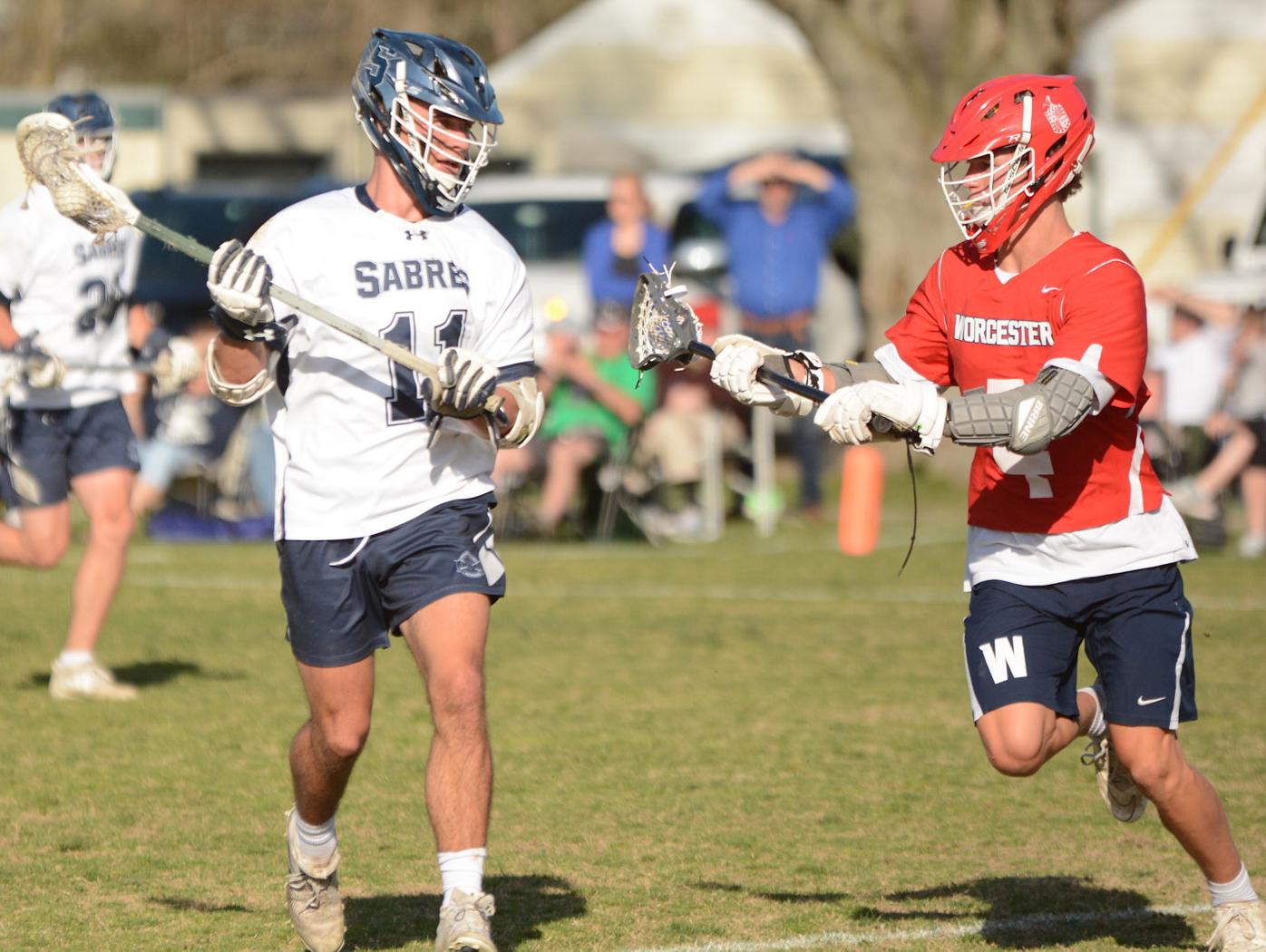 Saints Peter and Paul senior Cole Messick (11) looks for an opening in the defense during Friday's game against Worcester Prep. 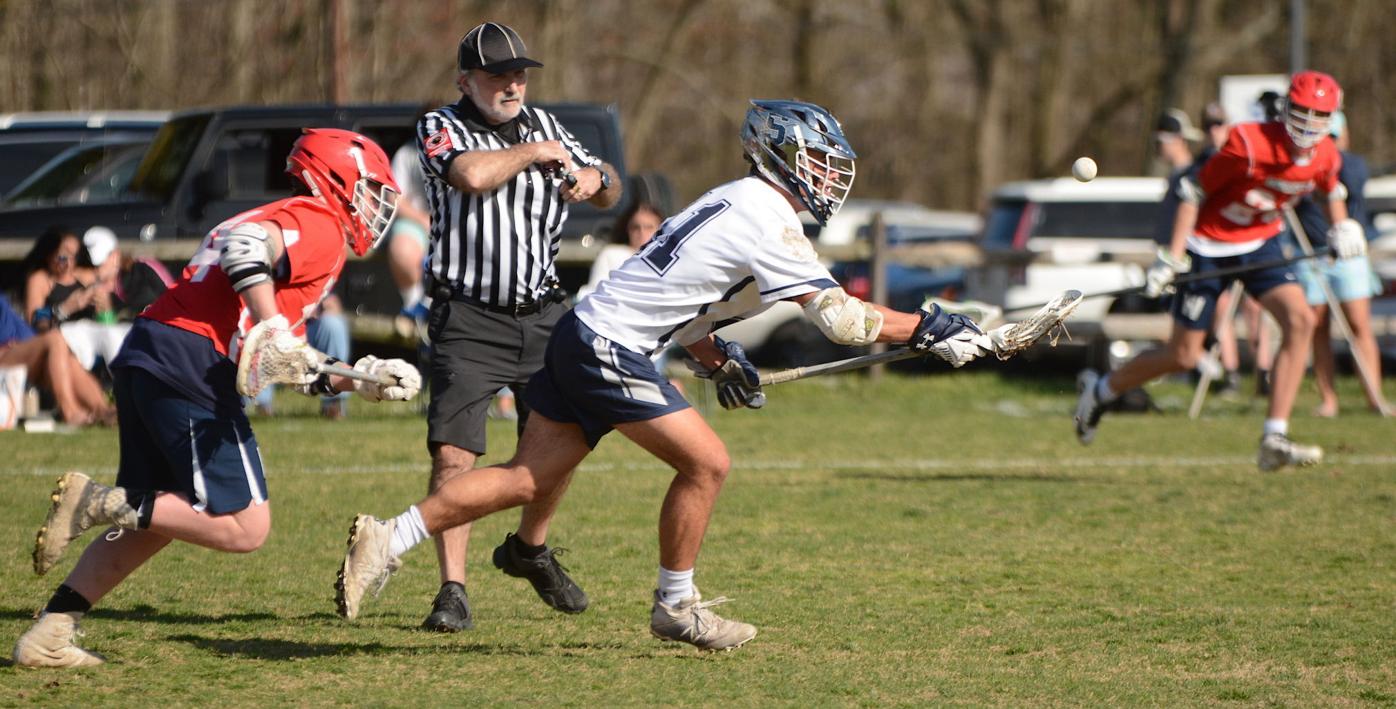 Saints Peter and Paul's Cole Messick (11) wins a faceoff during Friday's second half against Worcester Prep. 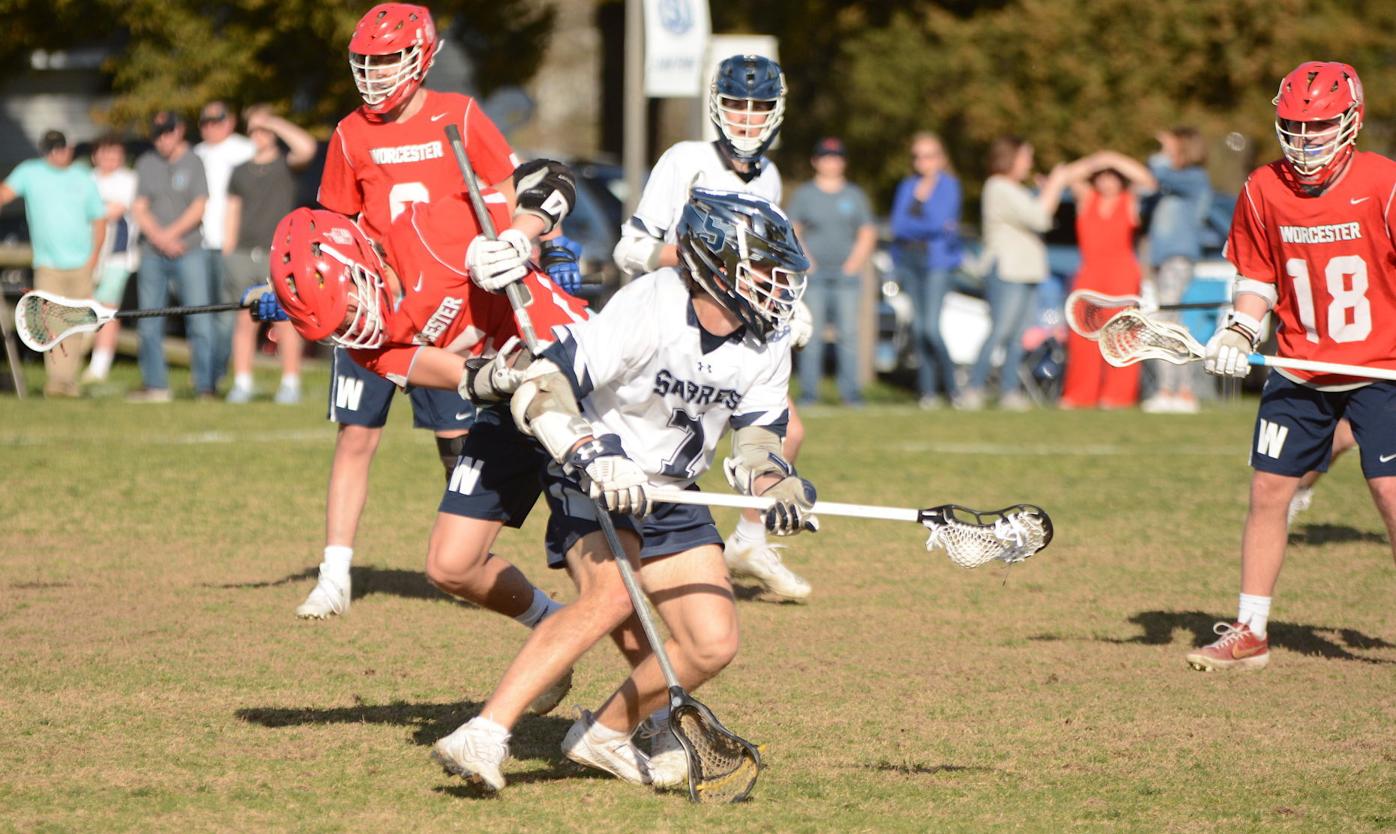 Saints Peter and Paul junior Kyler Krewson (7), who had six goals, looks for a gap in the defense during Friday's second half against Worcester Prep.

Saints Peter and Paul senior attackman Cory Morgan (20), who had four goals, drives toward the goal during Friday's second half against Worcester Prep.

Saints Peter and Paul senior Cole Messick (11) looks for an opening in the defense during Friday's game against Worcester Prep.

Saints Peter and Paul's Cole Messick (11) wins a faceoff during Friday's second half against Worcester Prep.

Saints Peter and Paul junior Kyler Krewson (7), who had six goals, looks for a gap in the defense during Friday's second half against Worcester Prep.

EASTON — They had the lead, but they weren’t seeing what they wanted.

So after 24 minutes of pleading and a brief halftime chat, Saints Peter and Paul High boys’ head lacrosse coach Pat Tracy and assistant Todd Wolters walked away from their players, allowing them to do some of their own problem solving.

“We challenged the guys at halftime,” Tracy said. “We asked them to get together and figure out what you guys need to do. And I think that’s the biggest thing. We can sit there and we can talk as coaches and say, ‘This is what you need to do.’ But at the end of the day these guys need to do it.”

The Sabres came out with an increased defensive intensity and dumped nine more goals in the net en route to a convincing 15-5 victory over Worcester Prep on a warm and breezy Friday afternoon.

“We just know that we can do better as a team and we weren’t playing to the standard that we hold ourselves to,” said Sabres attackman Kyler Krewson, who scored a game-high six goals. “And we were lucky to be up at halftime. So we knew that we had to step it up a little bit and do better in the second half to extend our lead.”

Tracy scheduled dates with Maryland Interscholastic Athletic Association A Conference opponent Mount St. Joseph’s and DeMatha of the Washington Catholic Athletic Conference as primers for the Sabres upcoming MIAA B Conference slate, which is set to open this Tuesday at Friends. Though Sts. Peter & Paul lost both games, Tracy found positives and thought his team was headed in a forward direction.

But despite taking a 6-2 lead into the break Friday, Tracy and Wolters spent much of the first half begging for better play on both ends of the field.

Not to the point where the Sabres (2-3) were ever in jeopardy of losing.

Brugh Moore’s goal with 7:48 left in the first quarter pulled Worcester (0-1) within a goal. Tracy used his first timeout a little over a minute later in hopes of getting a bit more from his team. Krewson answered. The junior launched himself from the right side of the net to slip a goal past Tinkler with 5:31 left in the period, then took a Pierce Gilden dish and delivered a laser into the right top shelf for a 4-1 Sabres lead.

Sts. Peter & Paul bumped its lead to 6-1 in the second quarter, as senior Eli Sherman — off a Gilden assist — and Krewson scored 46 seconds apart.

John Arrington just missed closing that gap less than two minutes later when his shot found the left post. Worcester’s Jack Gardner then sent a rip from right wing past Sabres goalie Sam Heister (14 saves), drawing the Mallards within 6-2. But Worcester couldn’t get any closer, as Sts. Peter & Paul killed off a 30-second extra-man opportunity and Heister made a late save to preserve a 6-2 halftime lead.

The Sabres were sharper in the second half.

“Those guys got together,” Tracy said of halftime. “They talked. They figured out a couple of things. They said, ‘Coach, can we try this, this and this?’ And I said, ‘Absolutely. Let’s go with it.’

“I think defensively our guys really started to press out, put a lot more pressure on them, create some turnovers,” Tracy added. “And when you play with that type of energy on the defensive end, it creates opportunities for us in between the lines and on offense, and we were able to do that and finish our opportunities.”

The third-quarter scoring was almost a repeat of the first quarter. Sherman rifled home his second goal with just under seven minutes left in the period before Morgan tucked another into the back of the net for an 8-2 lead. Gardner scored for Worcester, but again Krewson answered with a pair of goals, the second just before the buzzer sounded.

“We still had the lead but we definitely could have done better,” Krewson said of the first half. “I think we showed that in the second half and stepped it up as a team; had a little bit more energy.”

The Sabres steadily widened their lead in the fourth, with Morgan scoring twice and Krewson converting a Sherman dish. Gilden scored with 1:46 remaining before freshman Colin Roberts completed the scoring.

Griffin Jones and Austin Airey scored in the fourth for Worcester.

‘We’ve got to make sure that we are playing our best 48 minutes of lacrosse when we get into conference play” Tracy said. “The way we started the second half is the way we need to start the game. And we challenged the guys and they got together and talked amongst themselves and they came out and they did it.”

ST. MICHAELS — Kat Knox had two goals and an assist, and Ella Chandler scored twice as the Warriors improved to 5-0.

Emily Branic had a goal and an assist for Easton, and Kate Boldt and Maddi Spies each picked up an assist. Goalie Aubrey Lavezzo made three saves for the shutout.

RIDGELY — Owen Rorabaugh set up Austin Clark for the game’s only goal as the Bulldogs raised their record to 4-0.

RIDGELY — Lily Osborne and Julia Hammons each scored a goal to lead the Warriors. Corinne Mead had an assist for Easton.