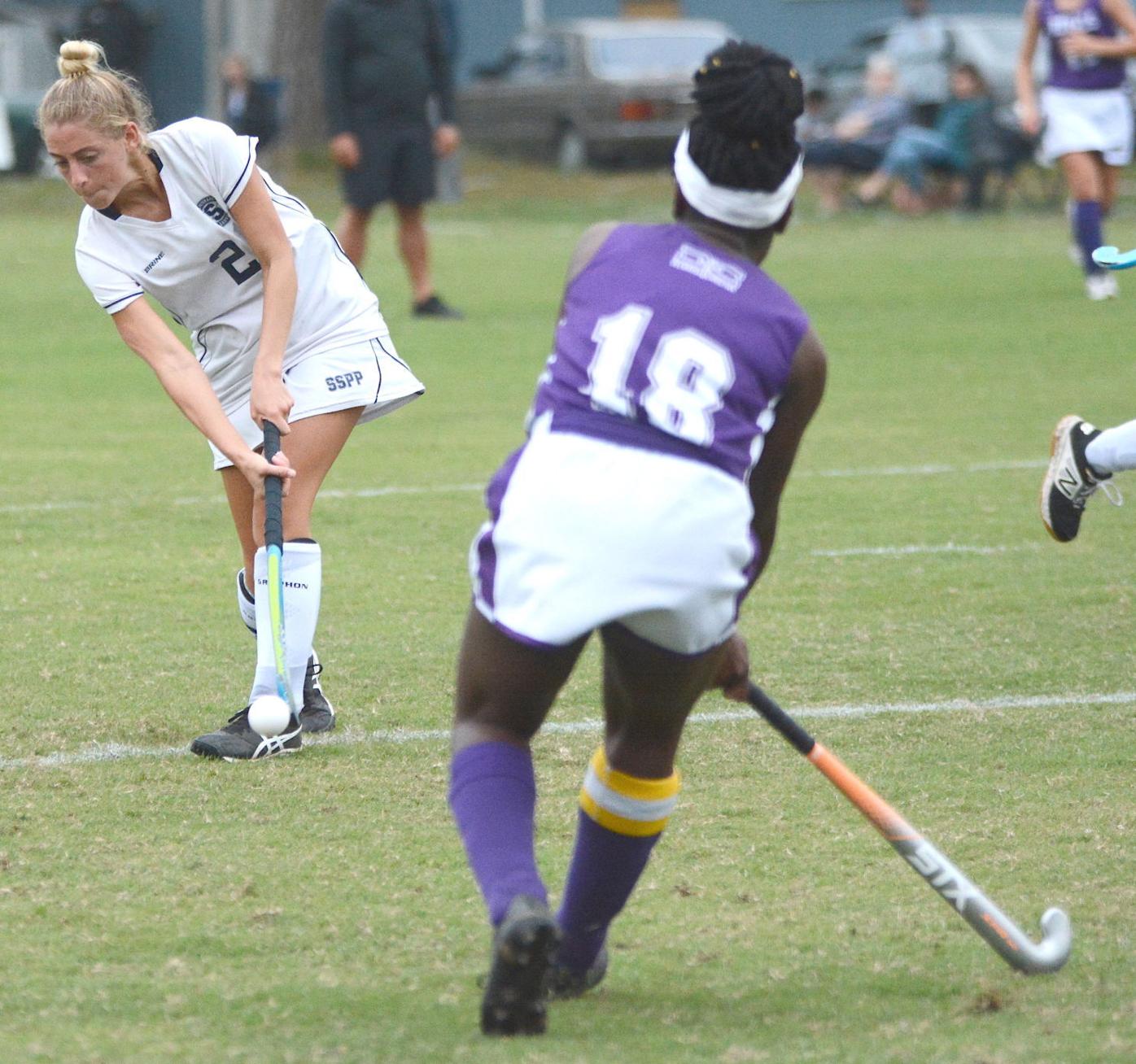 Saints Peter and Paul’s Nancy McGettigan, left, who had two goals and two assists, strikes a drive during the first half of Monday’s 8-0 victory over Delmarva Christian. 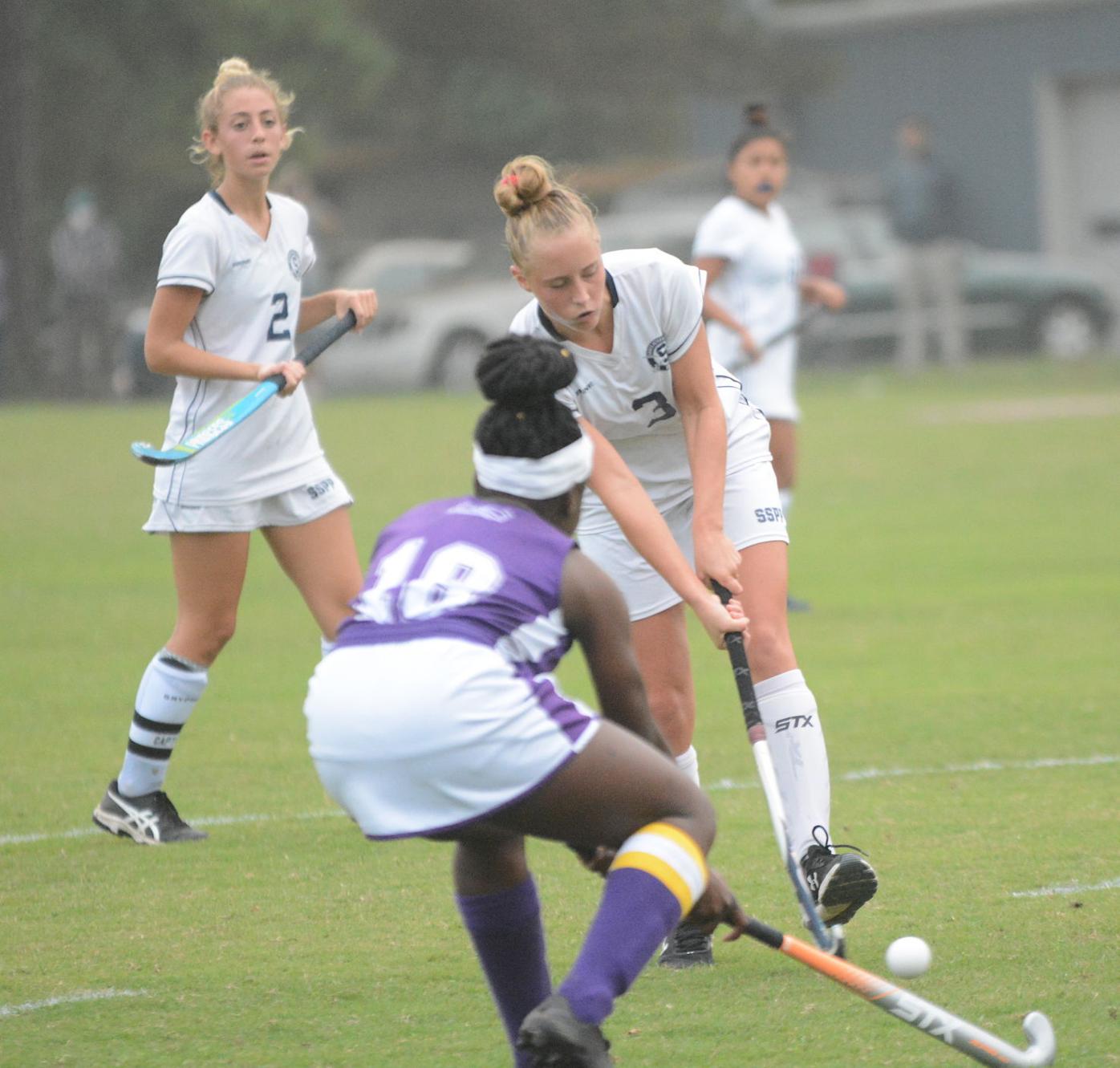 Saints Peter and Paul freshman Gennie Webb (3), who finished with a hat trick, unloads a drive during Monday’s game against Delmarva Christian.

Saints Peter and Paul’s Nancy McGettigan, left, who had two goals and two assists, strikes a drive during the first half of Monday’s 8-0 victory over Delmarva Christian.

Saints Peter and Paul freshman Gennie Webb (3), who finished with a hat trick, unloads a drive during Monday’s game against Delmarva Christian.

EASTON — The statistics were again overwhelmingly in her team’s favor.

There were the 45 shots on goal, 34 of which were stopped by Delmarva Christian’s sophomore goalie Elizabeth Moyer.

Her defense was hardly tested, with goalies Maddie Brice and Vika Lafferty maybe touching the ball once the entire game.

“We’re lacking a little bit of intensity in the last five yards, finishing the goal,” McQuaid said. “We’re hitting it, but not following it.”

The Sabres (2-1) will look to improve in that area Tuesday, when they host The Gunston School (2-1) at 3:30 p.m., with the winner advancing to Friday’s scheduled Eastern Shore Independent Athletic Conference championship against unbeaten Holly Grove.

“Still have things to work on,” McQuaid said. “I mean we’ve been off for two weeks.”

That perhaps has been the greatest challenge for McQuaid and assistant Missy Cannon in this season, where the COVID-19 pandemic has forced an abbreviated schedule, and created long waits between games. The Sabres opened the year Sept. 25 with a 4-2 loss to Holly Grove, waited two weeks before routing Worcester Prep, 11-0, then had another two-week layoff before finally getting yesterday’s senior-day game in.

“Keeping them up,” McQuaid said of this year’s biggest obstacle. “There’s so much uncertainty because tomorrow they could say, ‘OK, the season’s over.’ I’m just gladto get the senior game in because it’s been postponed twice.”

Senior Nancy McGettigan, who along with fellow classmate Joy Perry was recognized before the game, staked the Sabres to a 1-0 lead with a goal with 7 minutes, 29 seconds left in the first quarter.

Saints Peter and Paul continued dominating possession and peppering Moyer, who had 25 saves in the first half.

“Their goalie was very good,” McQuaid said. “She was outstanding. Delmarva Christian always has a good goalie. I don’t know who trains them, but they’re always very good.”

Still, Moyer couldn’t stop everything. Freshman Gennie Webb started working on a hat trick with less than 2 minutes remaining in the opening quarter, when she scored off a penalty-corner feed from McGettigan. Webb completed her three-goal effort in the second quarter, scoring unassisted 5:48 into the second quarter before converting Perry’s corner feed 2:33 later for a 4-0 lead that stood at the half.

McQuaid asked her team to maintain its intensity during the break, and the Sabres continued dominating ball possession in the second half, while rarely allowing the Royals to get across the 50-yard line.

“Midfield’s been playing well,” McQuaid said. “That kind of stayed the same. I guess that has been the strongest line that we have with Nancy and Lexi (Gordon) and Gennie Webb.”

Gordon’s goal with just 1:39 elapsed in the third quarter bumped the Sabres lead to 5-0 and began the running clock. Morgan Quade netted a pair of goals a little less than 5 minutes apart — the second off a McGettigan assist. McGettigan completed the scoring with a hard, low drive from about 20 yards out with 1:42 showing on the clock.

“They have a fabulous team,” Delmarva Christian head coach Heather Desiderio said. “They’re very tight. They’re a very good unit. Number two (McGettigan) and three (Webb), they know how to pass. That’s one of the things that they’ve always been good at. They cut to the ball. They hustle. They’re a good team.”