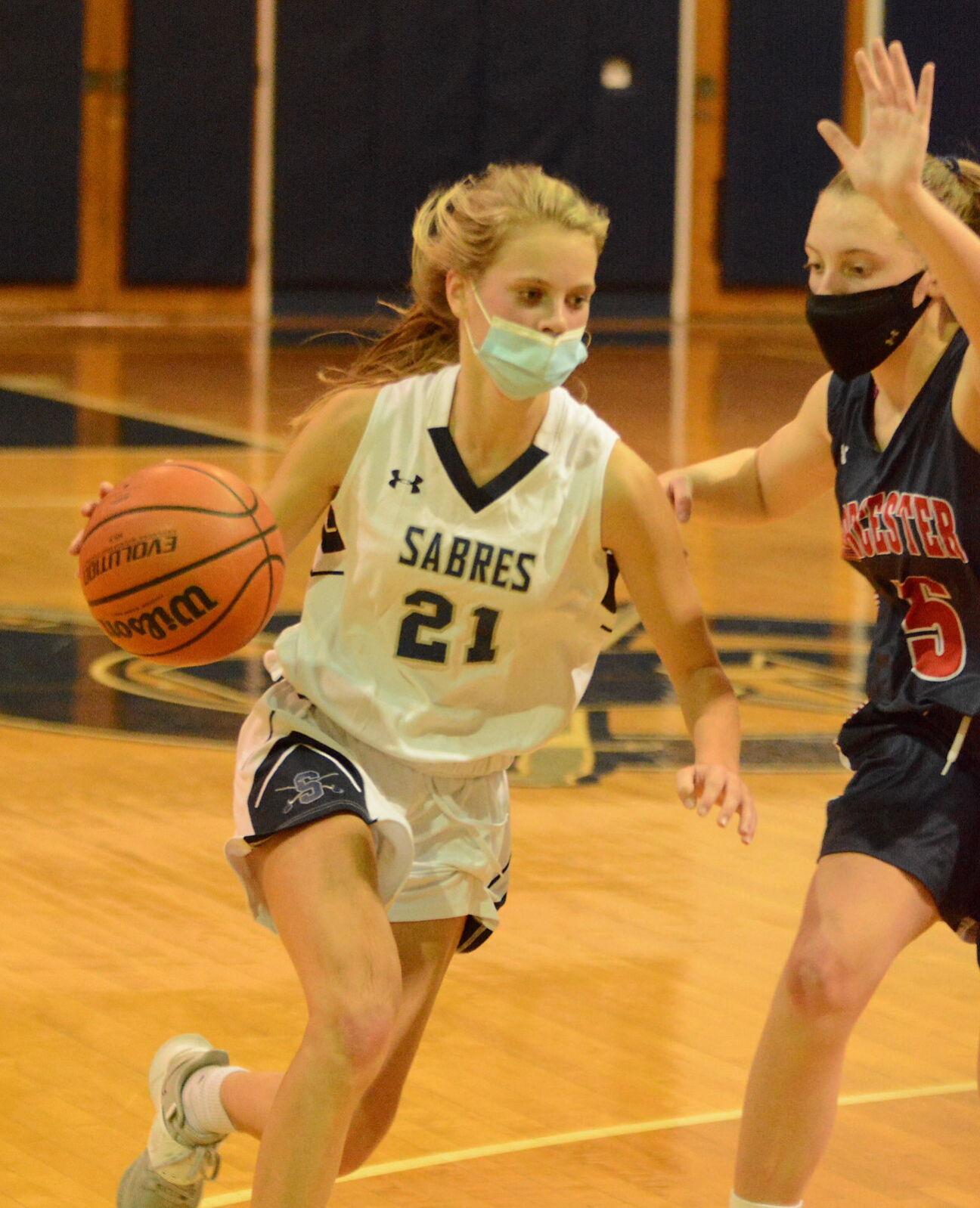 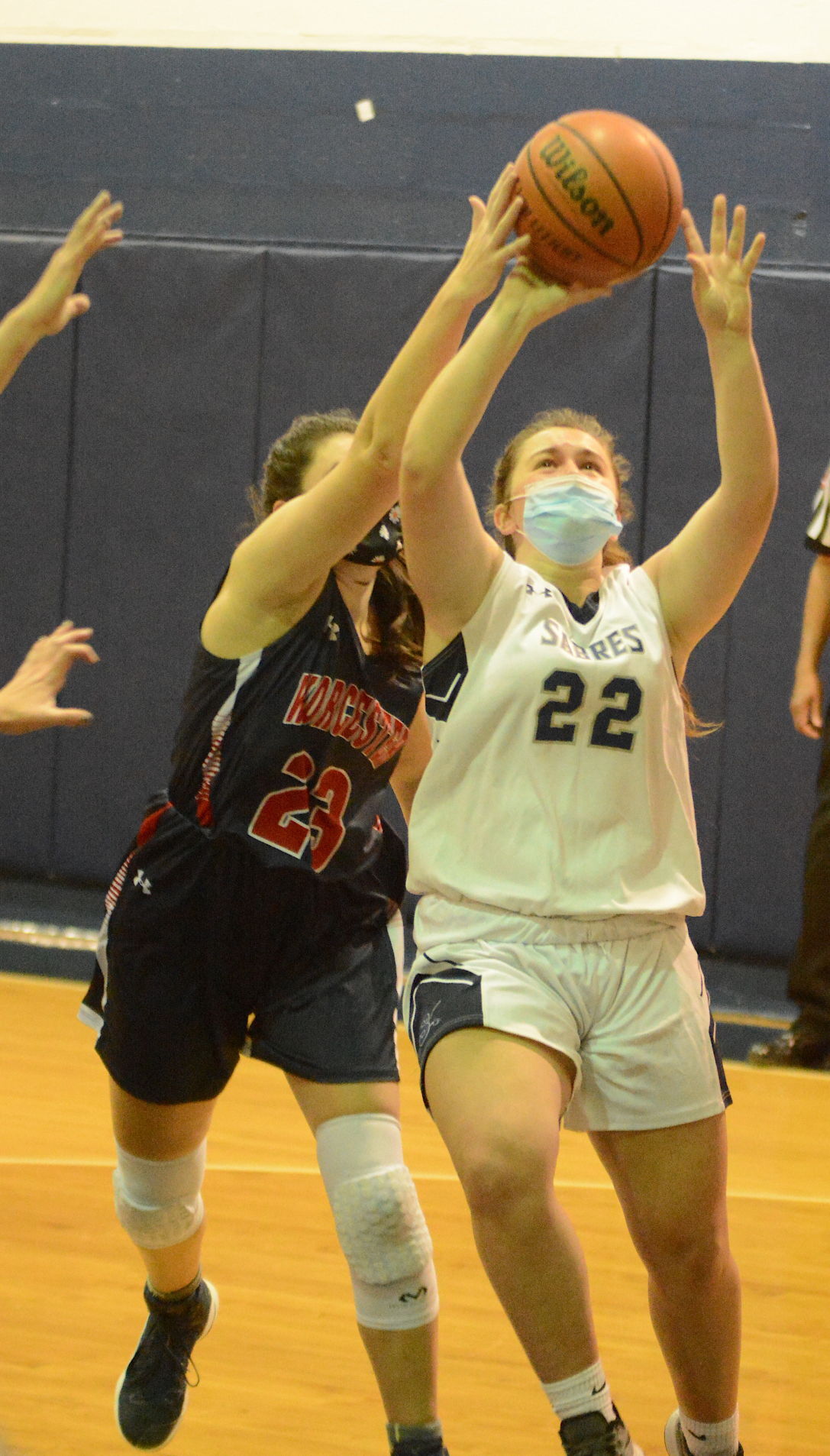 Saints Peter and Paul’s Caroline Talucci, right, drives to the basket against Worcester Prep’s CC Lizas during Monday’s second half. 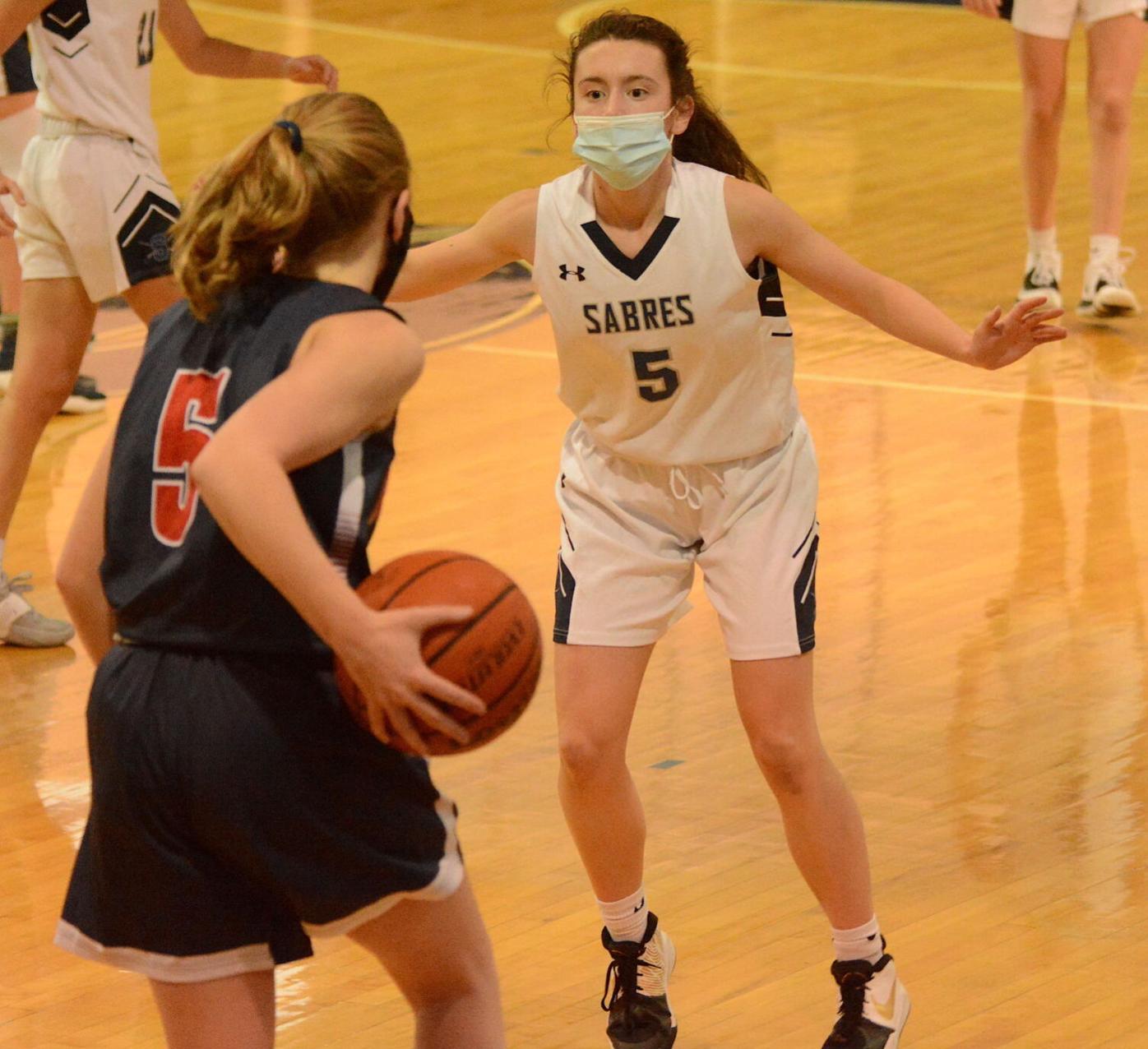 Saints Peter and Paul’s Caroline Talucci, right, drives to the basket against Worcester Prep’s CC Lizas during Monday’s second half.

EASTON — Her roster consists of nine players, including six sophomores and a freshman.

So Katie Murphy knew there would be growing pains entering her first season as Saints Peter and Paul High’s girls’ head basketball coach.

The Sabres suffered some of those pains Monday, as they struggled to make free throws and easy baskets in a 50-45 loss to a Worcester Prep team they defeated by 10 just last week.

“I’m not disappointed,” Murphy said after her team slipped to 1-2 for the season. “The points that were scoring, the things that we’re doing, I mean I’m not disappointed at all. That’s what I told them in the locker room. We shouldn’t have our heads down at all. Yeah, it’s a loss, but they performed very, very well.”

The area where Sts. Peter & Paul perhaps performed its best was refusing to wilt as the Mallards (1-1) looked ready to open substantial leads toward the end of the first half, and again in the game’s closing moments.

Myranda Beebe (10 points), who did not play in last week’s game, hit a baseline set shot with just over 3 minutes remaining in the first half to give Worcester Prep a 21-14 lead.

Lily Bauerle (game-high 19 points) scored a layup to nudge Worcester Prep to a 25-22 lead in the opening seconds of the second half.

But Sabres guard Morgan Quade (team-high 13 points) showed why she may be one of the top freshman in the Eastern Shore Independent Athletic Conference this season. Quade drained a 3-pointer to tie the game at 25-all with 56 seconds elapsed in the third quarter. Quade made a steal, raced down the floor for a layup, was fouled, and converted the foul shot for a 28-25 lead. Worcester Prep’s next possession almost ended the exact same way, as Quade again picked off a pass and drove the floor for a layup that extended Saints Peter and Paul’s lead to 30-25 with 5:37 left.

Worcester head coach Brian McDermott called time, settled his team and watched as Quade picked up her third and fourth fouls while the Mallards closed the quarter on a 10-2 run for a 35-32 lead heading into the final period.

“Difference between last week and this week, we are actually very fortunate to have Myranda Beebe back with us,” McDermott said. “(She’s) one of our juniors, a lacrosse player, also an excellent basketball player. So that brings a lot of energy to the team.

“And I just think we needed a couple more days to play together,” McDermott continued. “The girls are really the intelligent ones. They told me we should scrimmage more on Friday, and here we are Monday with a win. So I give the credit to them.”

Again Sts. Peter & Paul chipped away at its deficit.

Katie Bryan (seven points, team-high 12 rebounds) scored on a putback, was fouled, and canned the free throw with 4:18 left. The teams continued swapping baskets before Evelyn Murphy scored, drawing the Sabres within 45-41 with 2:23 left.

But Murphy hit another free throw before Messick sank her second 3-pointer of the game with 45 seconds left, whittling the Mallards’ lead to 46-45.

But Sts. Peter & Paul didn’t get any closer, as CC Lizas and Beebe each hit a pair of free throws in the final 37 seconds to cement the win. The Mallards were 12 of 20 from the foul line compared to the Sabres’ 6-for-22 effort.

“When you get in foul trouble early and then you’ve got to pick and choose players and change the dynamic, it makes a big difference,” Murphy said, referring to Quade’s foul problems. “And they came out a little bit more aggressive today. I think that was another thing that flustered the girls; kind of all over them.”