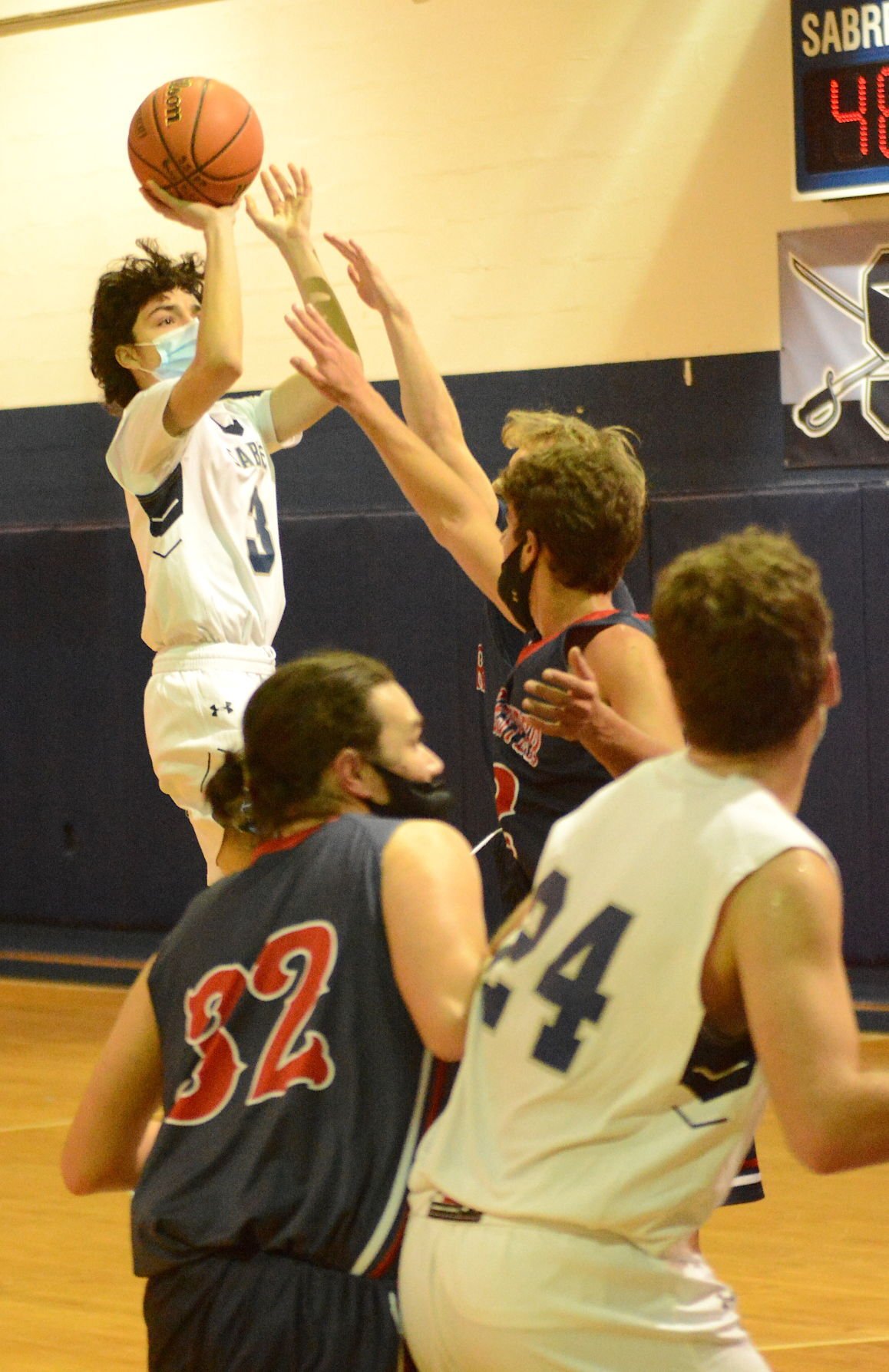 Saints Peter and Paul’s Brendan Sann (3) takes aim over a pair of Worcester Prep defenders during the second half of Wednesday’s 61-34 season-opening victory. 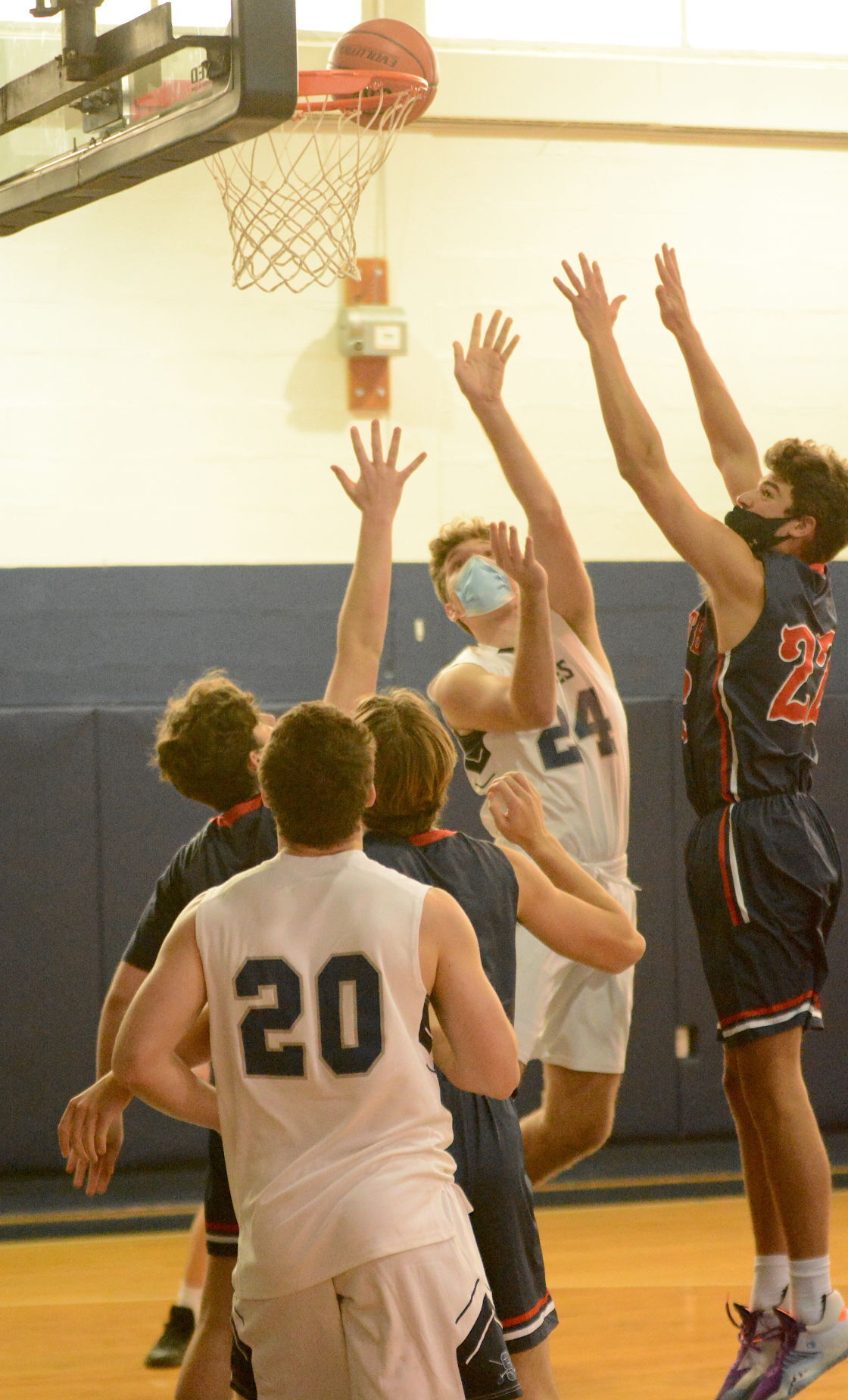 Saints Peter and Paul’s Dylan Wanichko (24) follows through on a shot during his game-high 20-point performance Wednesday against Worcester Prep.

Saints Peter and Paul’s Brendan Sann (3) takes aim over a pair of Worcester Prep defenders during the second half of Wednesday’s 61-34 season-opening victory.

Saints Peter and Paul’s Dylan Wanichko (24) follows through on a shot during his game-high 20-point performance Wednesday against Worcester Prep.

EASTON — It scored the game’s first 10 points and never trailed.

But as the first half drew to a close and the second half progressed, Saints Peter and Paul High boys’ head basketball coach Gary Gould kept asking his team, “who wants to run?”

The Sabres responded by continuously pushing the pace Wednesday afternoon during a 61-34 season-opening victory over Worcester Prep.

“I’m really happy,” said Gould, whose team stretched its lead in every quarter. “It was nice to be out there after all of these months. I think I was more excited about the game than the kids.”

Yes, it was only the first game of the season. And Gould quickly pointed out there were things he was hoping to work on in practice before Friday’s scheduled game against Maryland Interscholastic Athletic Association opponent Concordia Prep.

But the Sabres head coach had plenty to be happy about.

That lead ballooned to 28-13 with less than a minute before half, as the Sabres continuously worked the ball inside and took advantage of their height against a Mallards team that was down four players, then lost its best player, Mason Brown, to an ankle injury with 4 minutes, 30 seconds left before halftime.

Defensively, Sts. Peter & Paul held Worcester Prep under 10 points in every quarter with the exception of the second, when the Mallards scored 11. The Sabres got numerous second and third shots at the basket, led by senior Dylan Wanichko, who scored 10 consecutive points in the fourth quarter to punctuate a game-high 20-point performance.

“It only takes one person to shoot, but four people need to rebound,” Gould said. “I think they bought into that today. They tried their best to rebound as much as possible. That can help.”

The Sabres got 11 points from senior Cory Morgan and eight from junior big man Eli Sherman.

But what may have pleased Gould the most was his team never let off the gas, grabbing defensive rebounds and racing down court time after time in the second half.

“I’m trying to get them understanding sprinting to the opposite end, changing directions,” Gould said. “Because if everyone runs at the same speed, no one’s ahead of no one. That spreads the court and makes everything open for the point guards to see. So if we can stretch the defense we might be able to get a lot of easier shots.”

Sam Heister’s 3-pointer with 3:33 left in the third quarter expanded Sts. Peter & Paul’s lead to 37-21. Brugh Moore drained a pair of free throws for Worcester Prep, then watched as the Sabres went on a 9-0 tear that began a 24-13 closing run.

“First half we got plenty of open shots,” Mallards head coach Pat Moylan said. “Offense was fine. We broke the press fine. We handled the ball well. But we looked at free throws, 9 for 21 from the free-throw line. They only took (10) free throws. We took 21. So had we continued to push it in there, and then of course convert free throws, it would have been a better, closer outcome.”

Jack Gardner hit a pair of 3-pointers to lead Worcester Prep with 12 points.

Gould couldn’t have been happier with the outcome, especially after a trying 2019-20 season.

“Last year we only had six or seven players for the most part,” Gould said. “It was a down season as far as number of players. So I knew that what we had last year, if they could just develop a little bit, then we could be better moving forward. And luckily we had more kids come out this year. So it’s been worth it.

BERLIN — Freshman Morgan Quade logged her second double-double of the season with 18 points and 10 rebounds, and also collected three steals and three assists, as the Sabres evened their record at 1-1.