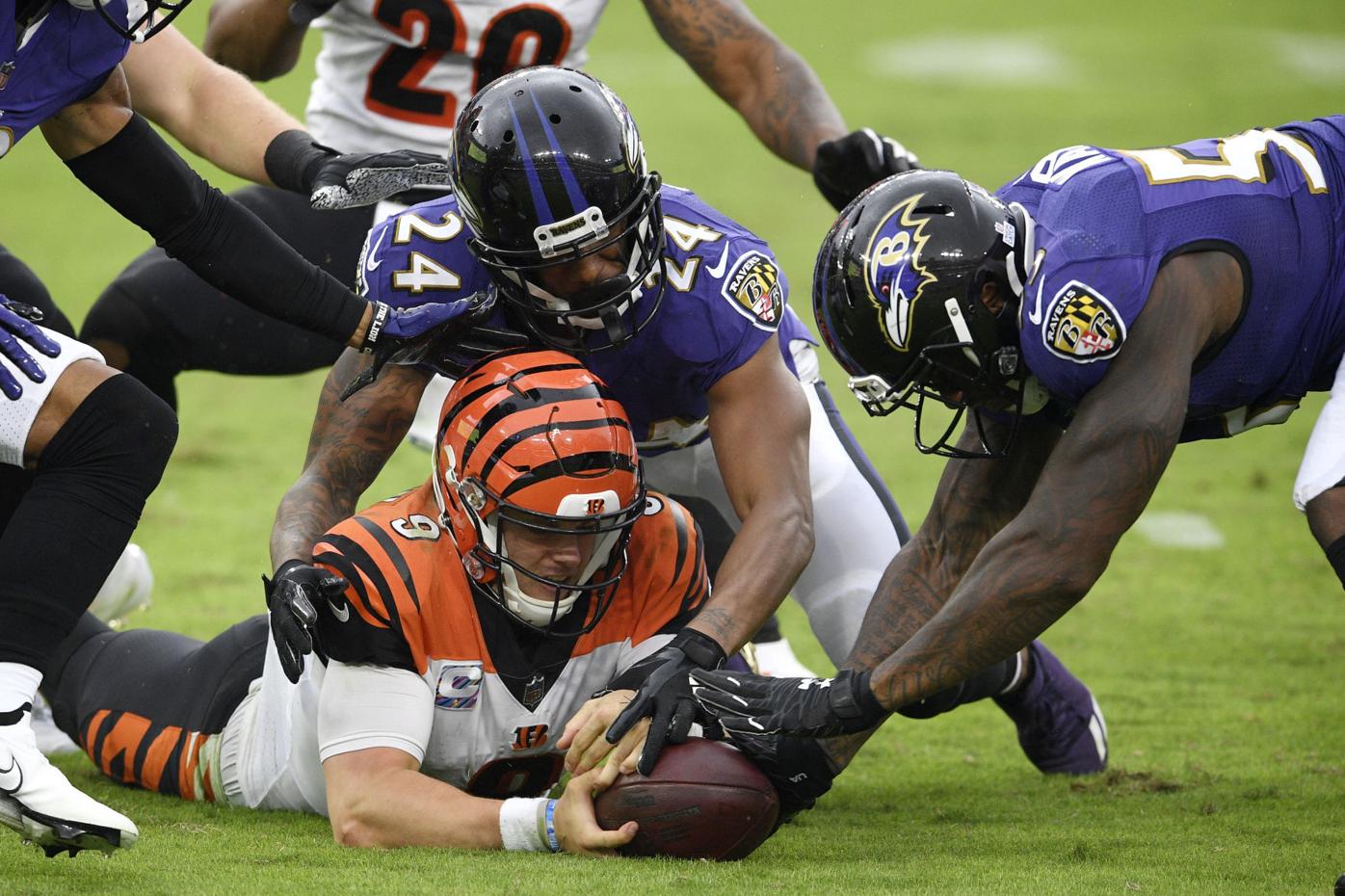 Cincinnati quarterback Joe Burrow, bottom left, tries to retrieve his fumble as Baltimore cornerback Marcus Peters (24) and defensive end Jihad Ward (53) challenge him for the recovery during Sunday’s second half. 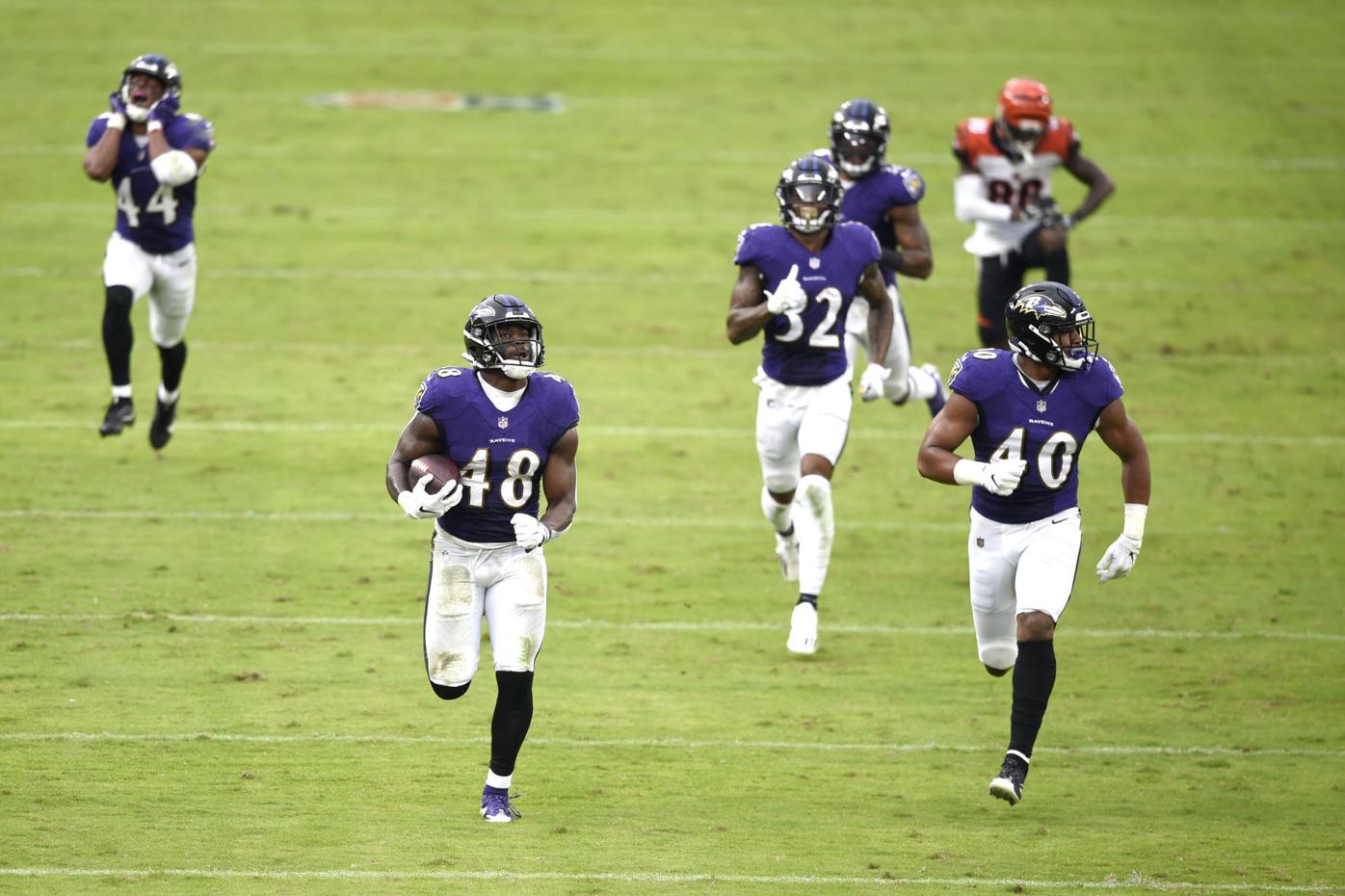 Ravens inside linebacker Patrick Queen (48) returns a fumble recovery 53 yards for a touchdown on a ball dropped by Cincinnati wide receiver Mike Thomas, top right, during Sunday’s second half.

Cincinnati quarterback Joe Burrow, bottom left, tries to retrieve his fumble as Baltimore cornerback Marcus Peters (24) and defensive end Jihad Ward (53) challenge him for the recovery during Sunday’s second half.

Ravens inside linebacker Patrick Queen (48) returns a fumble recovery 53 yards for a touchdown on a ball dropped by Cincinnati wide receiver Mike Thomas, top right, during Sunday’s second half.

Baltimore Ravens defensive coordinator Don “Wink” Martindale isn’t selective when choosing whom to use on a blitz. At any given time, opposing quarterbacks have to be on the lookout for linebackers, cornerbacks or safeties.

First, second or third down, it doesn’t matter. It could be any number of players from each of those positions, and they’ll be coming from unexpected angles.

The Ravens had seven sacks Sunday against the Bengals, including five by defensive backs. Baltimore registered 15 hits on quarterback Joe Burrow, who threw an interception and lost a fumble in a 27-3 defeat.

“It was fun,” said cornerback Jimmy Smith, who started the sack party during Cincinnati’s opening possession. “You can give that to Wink. He likes to send DBs, he sends everybody from anywhere.”

Now in his 10th season with the Ravens, Smith is hard-pressed to remember when the team had a defense this versatile.

“We have a really extremely talented defense this year,” Smith said Wednesday. “This ranks right up there with all of them as far as depth, talent and veteran leadership.”

Baltimore went 14-2 during the regular season last year behind an offense directed by Lamar Jackson. The offense isn’t quite as productive this season, in part because opposing defenses have adjusted to Jackson’s versatility. But the Ravens (4-1) have matched the best start in franchise history because Martindale has made the most of a very talented roster.

The addition of Calais Campbell and Derek Wolfe up front, along with top draft pick Patrick Queen at middle linebacker, made a good defense even better. The secondary, which features Smith and Pro Bowlers Marlon Humphrey and Marcus Peters, has easily overcome the loss of seven-time Pro Bowl safety Earl Thomas, who was cut in the offseason after fighting with a teammate on the practice field.

“The players are the ones to do it,” coach John Harbaugh said. “It’s one thing to put a game plan together, and that’s good, and that’s important and valuable. But let’s give credit to the players.”

The players, in turn, throw kudos in the direction of Martindale. Facing a rookie quarterback who came in with a streak of three straight 300-yard games, Martindale drew up a scheme that called for plenty of pressure.

The Ravens have forced a turnover in 18 straight games, the longest current streak in the NFL. Many of those takeaways can be attributed to Humphrey, the closest thing to a pickpocket on a football field. Humphrey has three forced fumbles this season, including a strip of Bengals receiver Mike Thomas that Queen turned into a 53-yard touchdown for a 27-0 lead.

Smith smiled when describing Humphrey’s ability to wrestle the ball out of a player’s grasp.

“The fact he consciously thinks about punching that ball every single play, even in the middle of a tackle, is huge,” Smith said.

Humphrey also has an interception this season and ranks third on the team in tackles.

“Marlon, I feel like he should be up for defensive MVP,” Jackson said. “If not, you could give it to him early.”

Despite allowing more than 500 yards two weeks ago in a loss to Kansas City, the Ravens will bring the sixth-ranked defense in the league to Philadelphia on Sunday. They’ll be looking to harass Eagles quarterback Carson Wentz and move up a few notches in rankings.