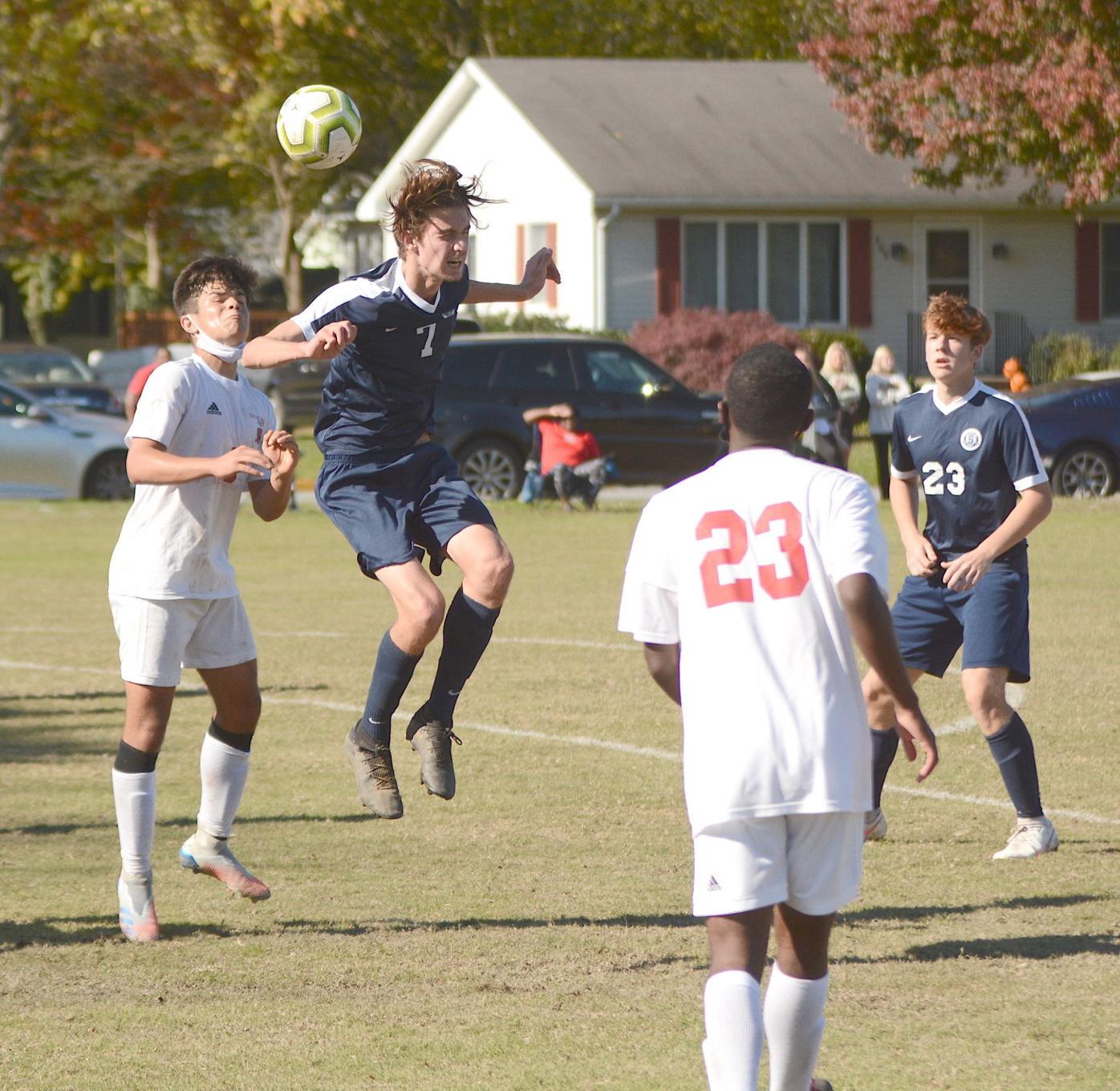 Saints Peter and Paul’s Ben Schroeder (7) strikes a header in front of Concordia’s Yuri Brag during Saturday’s second half. 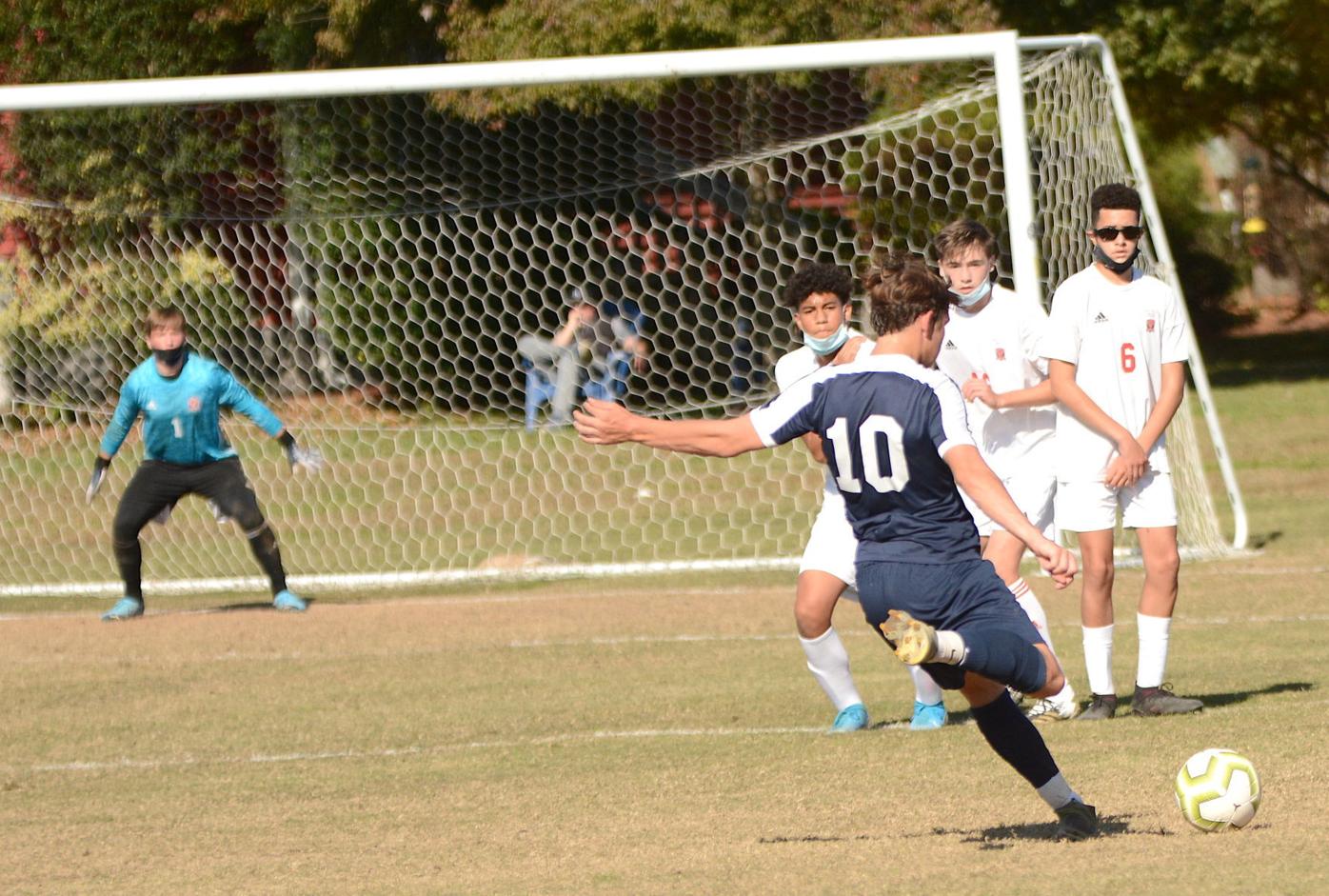 Saints Peter and Paul’s Keller Daniels (10) prepares to strike a direct kick over a wall of Concordia players during Saturday’s first half. 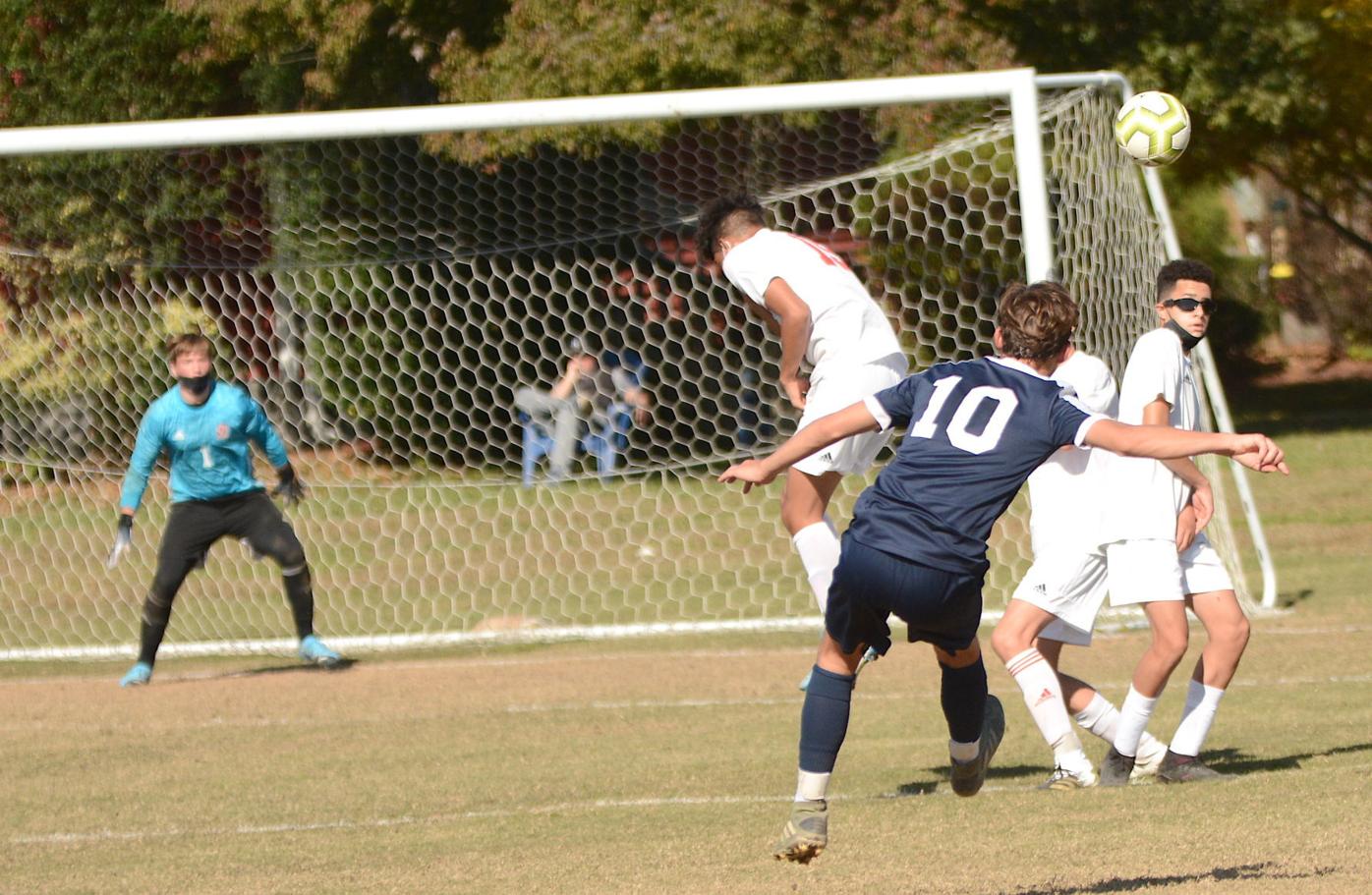 Saints Peter and Paul’s Keller Daniels (10) follows through on a direct kick in the first half of Saturday’s game against Concordia. 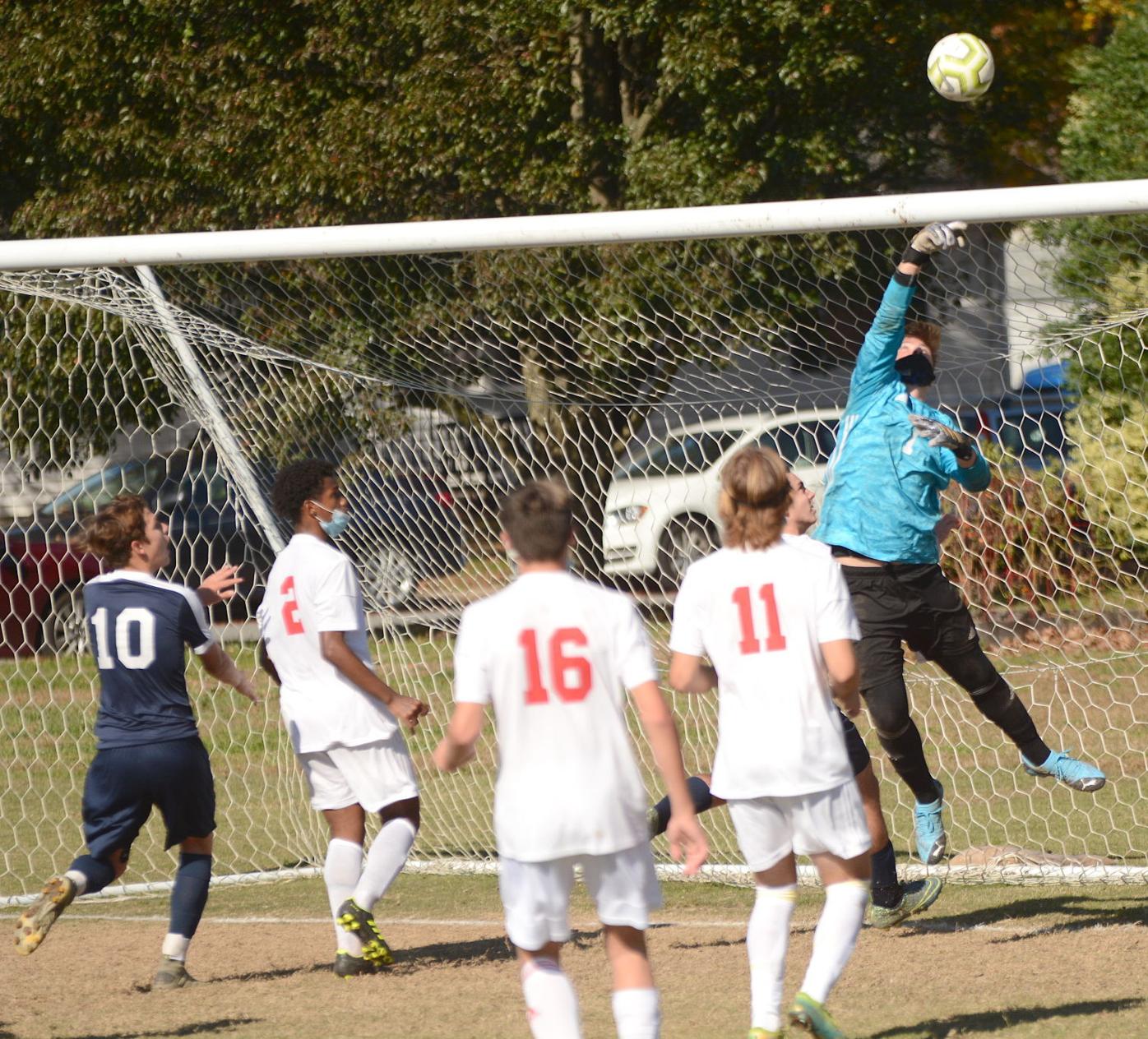 Concordia keeper Colton Drought leaps to punch a ball away as Saints Peter and Paul’s Keller Daniels (10) looks on early in the first half Saturday.

Saints Peter and Paul’s Ben Schroeder (7) strikes a header in front of Concordia’s Yuri Brag during Saturday’s second half.

Saints Peter and Paul’s Keller Daniels (10) prepares to strike a direct kick over a wall of Concordia players during Saturday’s first half.

Saints Peter and Paul’s Keller Daniels (10) follows through on a direct kick in the first half of Saturday’s game against Concordia.

Concordia keeper Colton Drought leaps to punch a ball away as Saints Peter and Paul’s Keller Daniels (10) looks on early in the first half Saturday.

EASTON — One of the first instructions G.R. Cannon directed at his team late Saturday morning was patience.

Saints Peter and Paul High’s boys’ head soccer coach still wants his team to win and not settle for moral victories. He still wants his team playing at full speed and battling for every 50-50 ball. But the abbreviated six-game schedule cobbled together for the Sabres courtesy of the COVID-19 virus didn’t allow for a preseason, and won’t allow for a postseason either.

Because of that scenario, Cannon seems a little more patient himself this fall, and has viewed the first two games on his team’s docket as a preseason of sorts.

For that to happen, Cannon knows his team must minimize the sort of miscues it committed Saturday during a 3-0 loss to Concordia in a Maryland Interscholastic Athletic Association B Conference game.

“We found something in the second half that works,” said Cannon, who watched Concordia (3-2) score all three of its goals in the first half. “There are no moral victories here. We know that. They’re a very good team. But again, if they’d of made the same mistakes we did, we’d have made them pay. And they made us pay.”

Cannon thought his defense lost its shape on the Saints’ first two goals, and made yet another mistake, when Ryan Calheira’s goal with just over 15 minutes remaining in the half gave Concordia its third goal in a 20-minute span.

“We just made two bad mistakes,” Cannon said. “They only had six shots. I felt we dictated the possession. But we can’t make those mistakes. Midfield, guy turns you, we just lost our shape and we paid for it twice.”

The first of those miscues came in the game’s eighth minute when Calheira took a feed from Yuri Braga, steamed down left wing and struck a low shot that eluded Sabres keeper Cory Morgan and nestled into the far right corner of the goal. Less than 10 minutes later, the Saints struck again as Daniel Minaker dished to Braga, who unloaded a hard drive from about 15 yards away.

“We started strong,” said Concordia head coach Neto Adauto, whose team won its third straight after losing to Archbishop Curly and Calvert Hall to start the year. “Defensively and offensively we kept our shape and moved the ball well, created a lot of opportunities in the first half.”

The Saints converted another one of those opportunities when Calheira scored his second goal of the half for a 3-0 lead, ending the game’s scoring.

“Obviously we were just trying to manage the game, try to look for maybe one more goal, keep possession,” Adauto said of the second half. “They (Sts. Peter & Paul) did a good job adjusting to the formation. When you’re up three goals sometimes you have that tendency to get comfortable, get casual. Obviously great job on their part; (they) kept fighting, kept working and they kept the score to 0-0 (in the second half) which is good.”

The Sabres, who were without All-MIAA midfielder Shawn Reinoehl (ankle injury), created enough scoring chances where they could have trimmed their deficit. But too often crossing passes bounded harmlessly through the box with no one on the receiving end for a potential shot on goal.

“We only had about four good shots, but we created more opportunities than them,” Cannon said. “We’ve got to be on the end of it. We’ve got to be there. I know for a fact there were four (passes) that went across the face of the goal and if we contested it, if you’re making the right run at the back post, it’s as tap.

“I think the second half we were organized; we were the better team,” Cannon said. “So you’re pretty level in opportunities and shots, probably dictated the tempo of the game a little more I felt, and the rhythm of the play, and possession once the game settled in. But again, it’s about scoring goals and minimizing mistakes.”