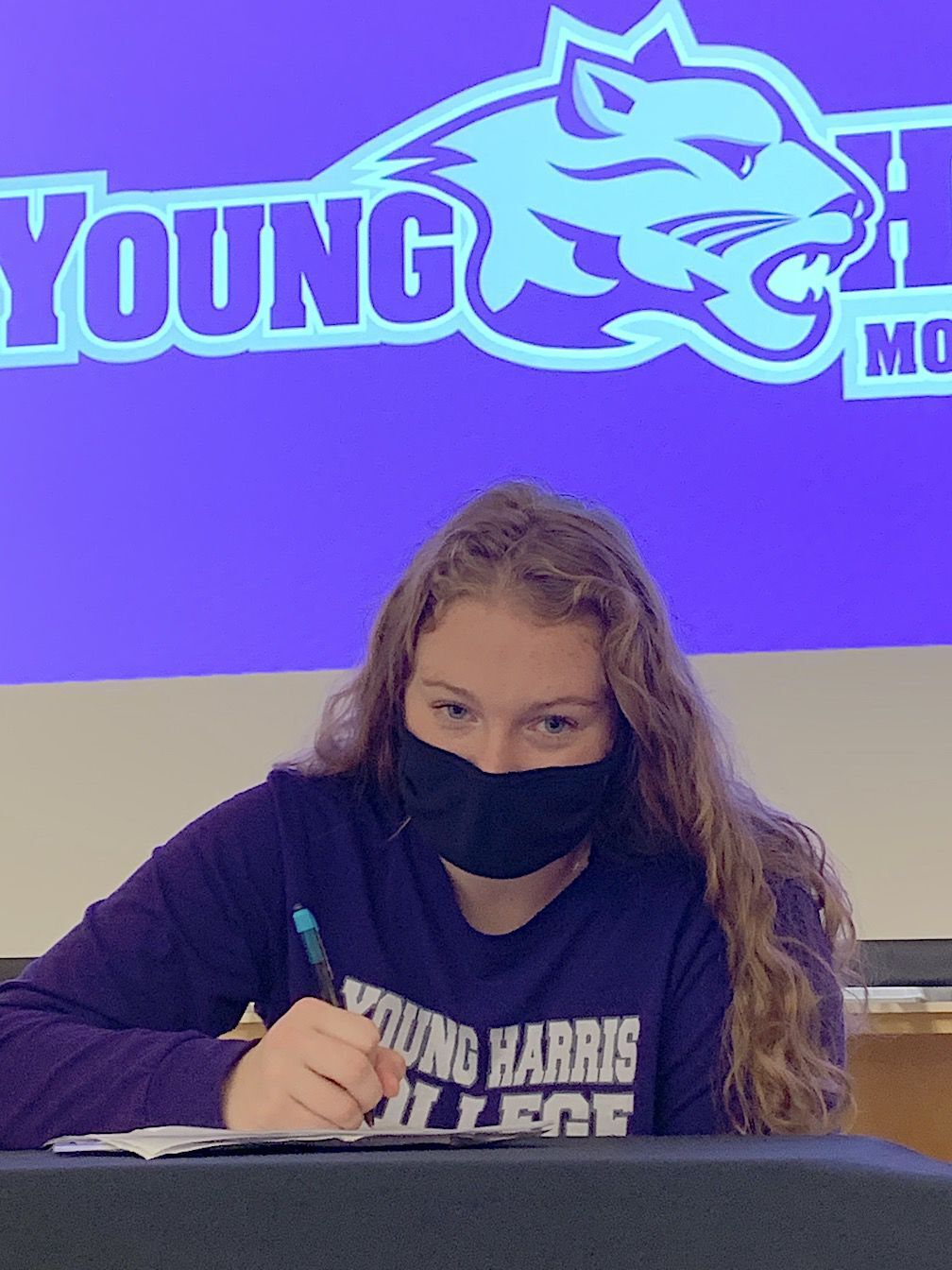 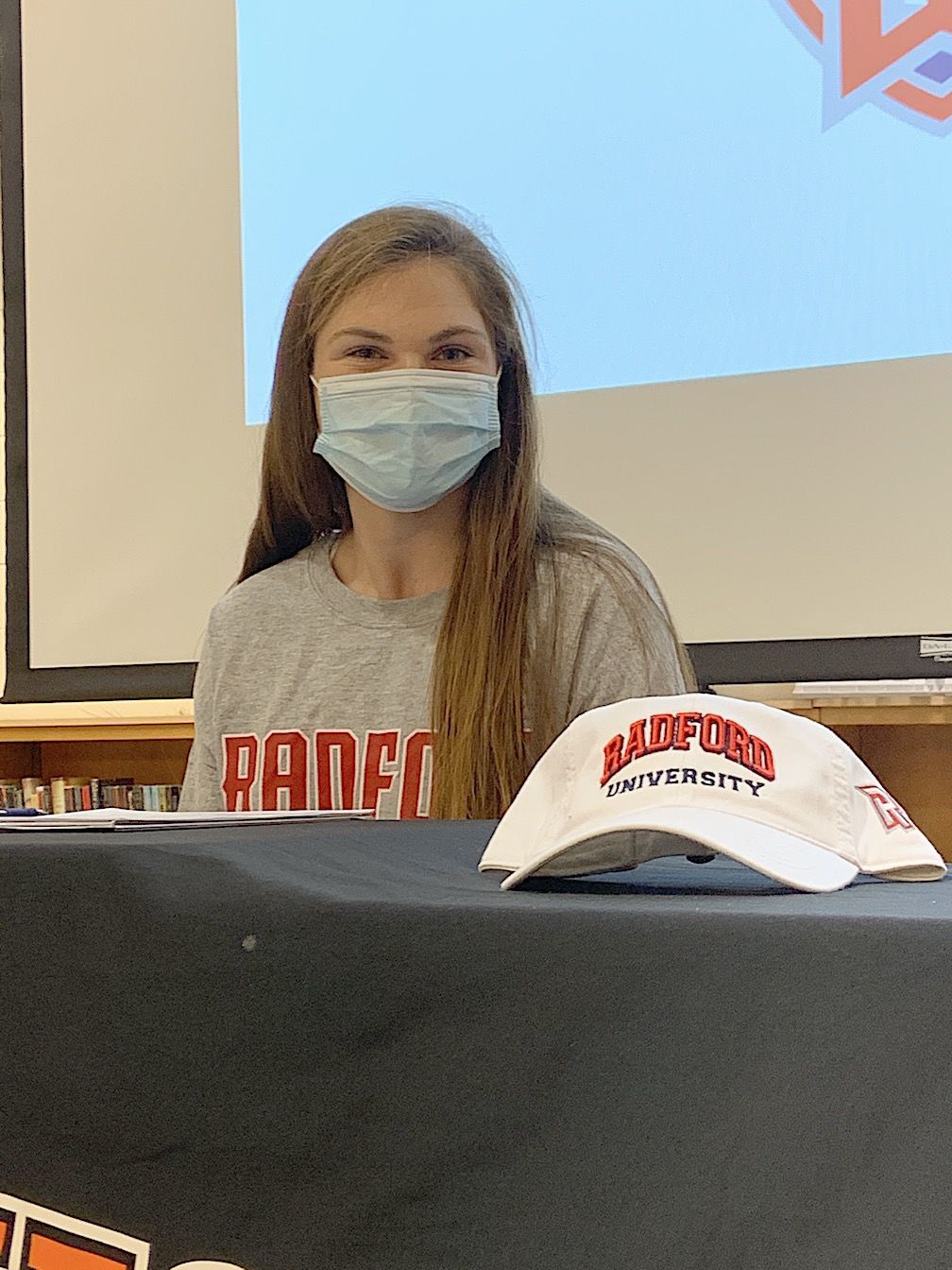 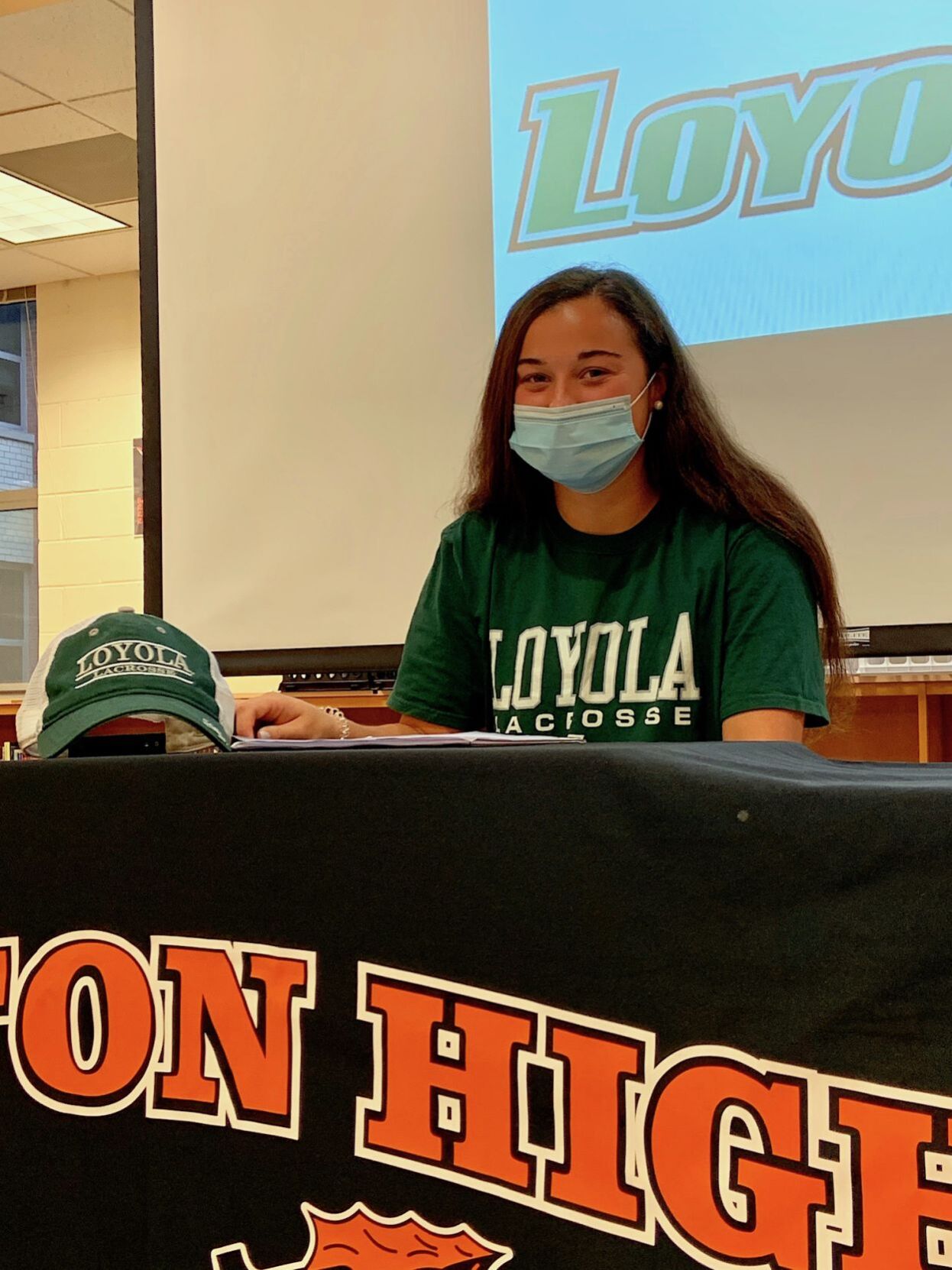 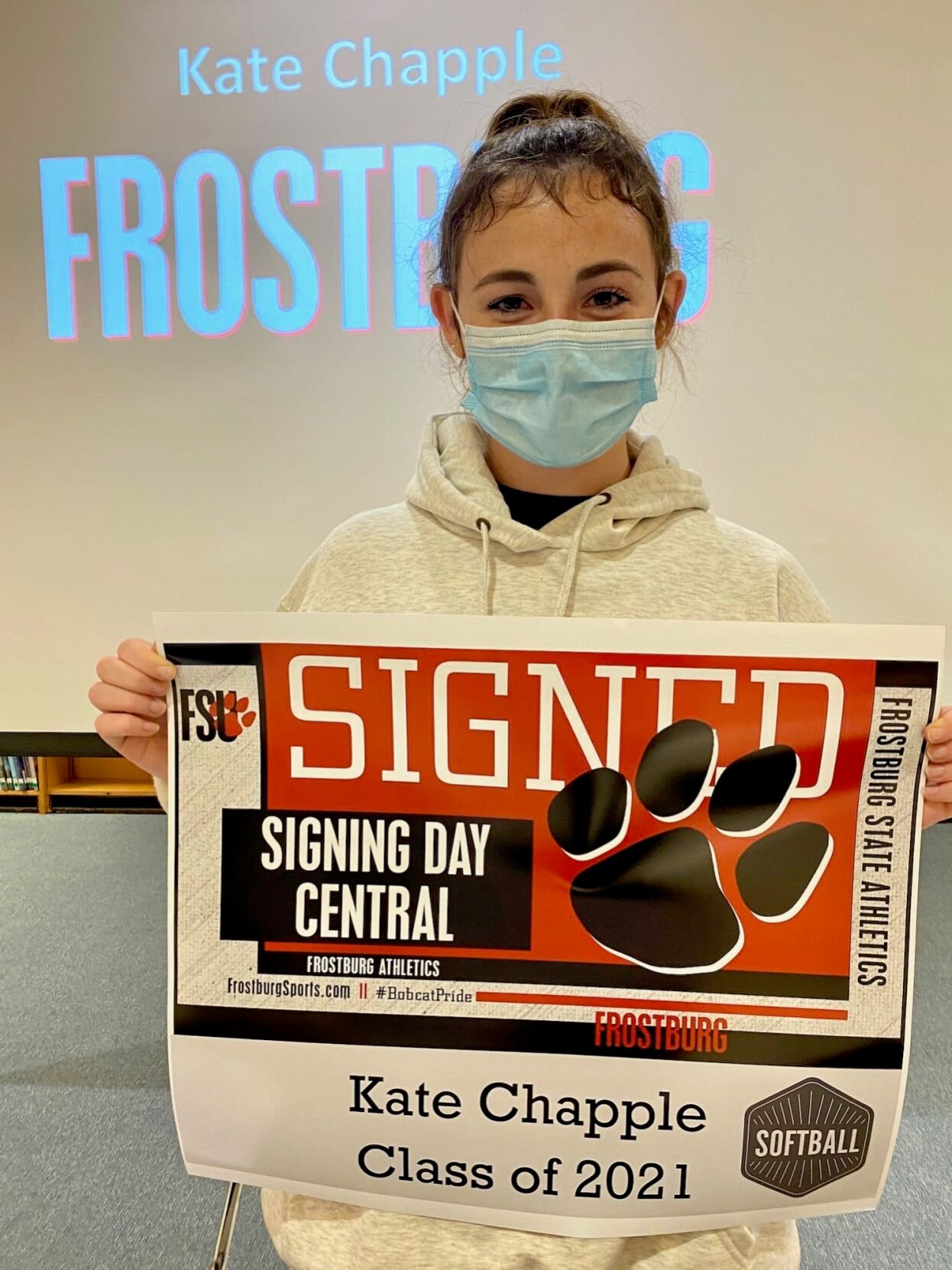 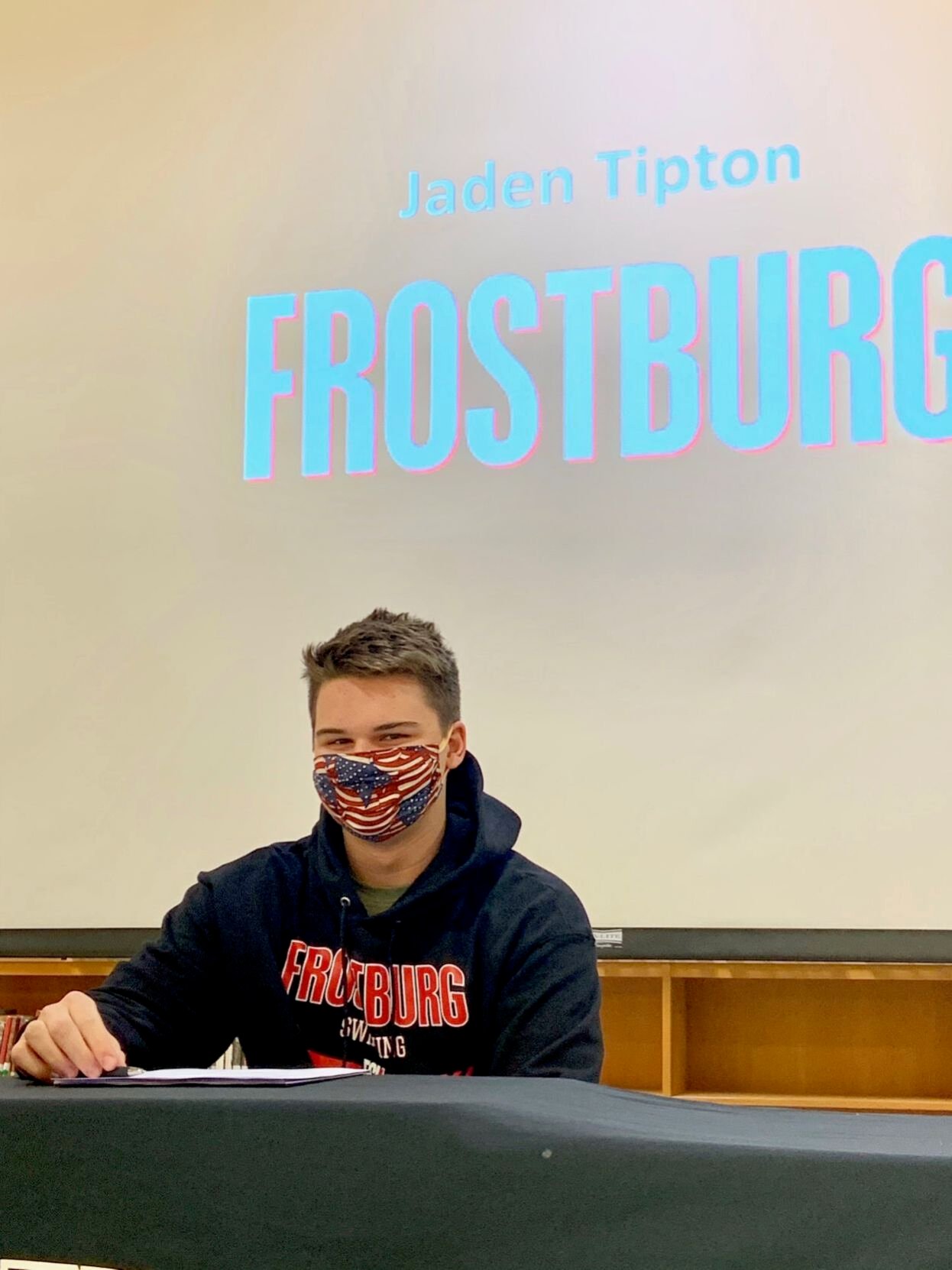 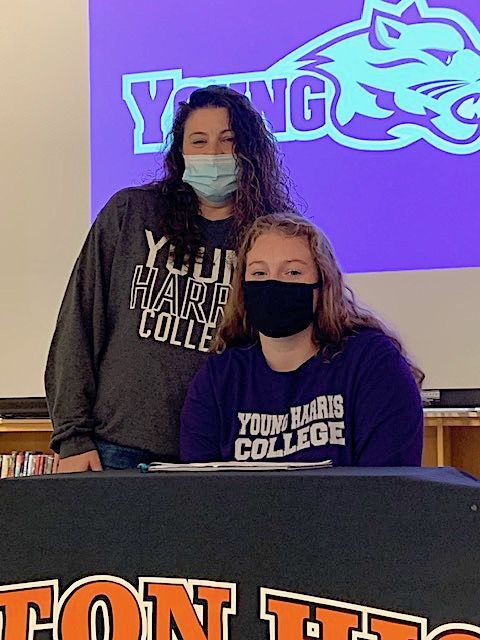 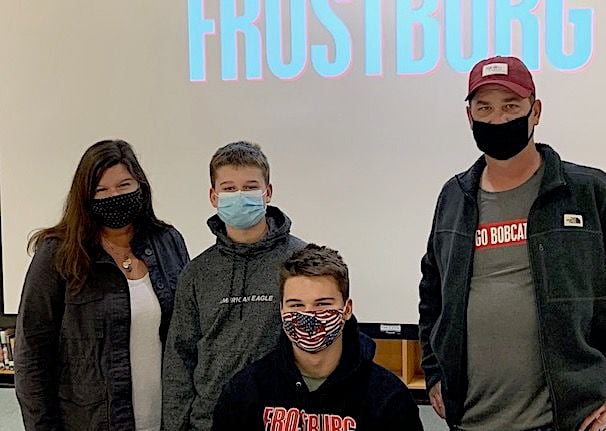 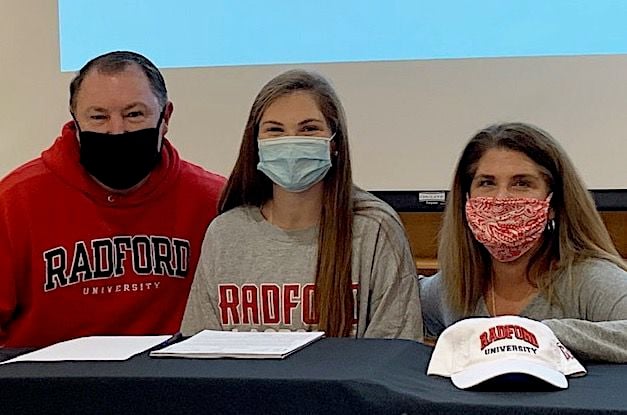 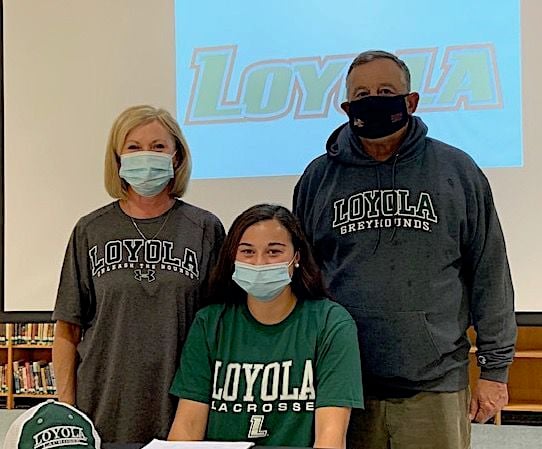 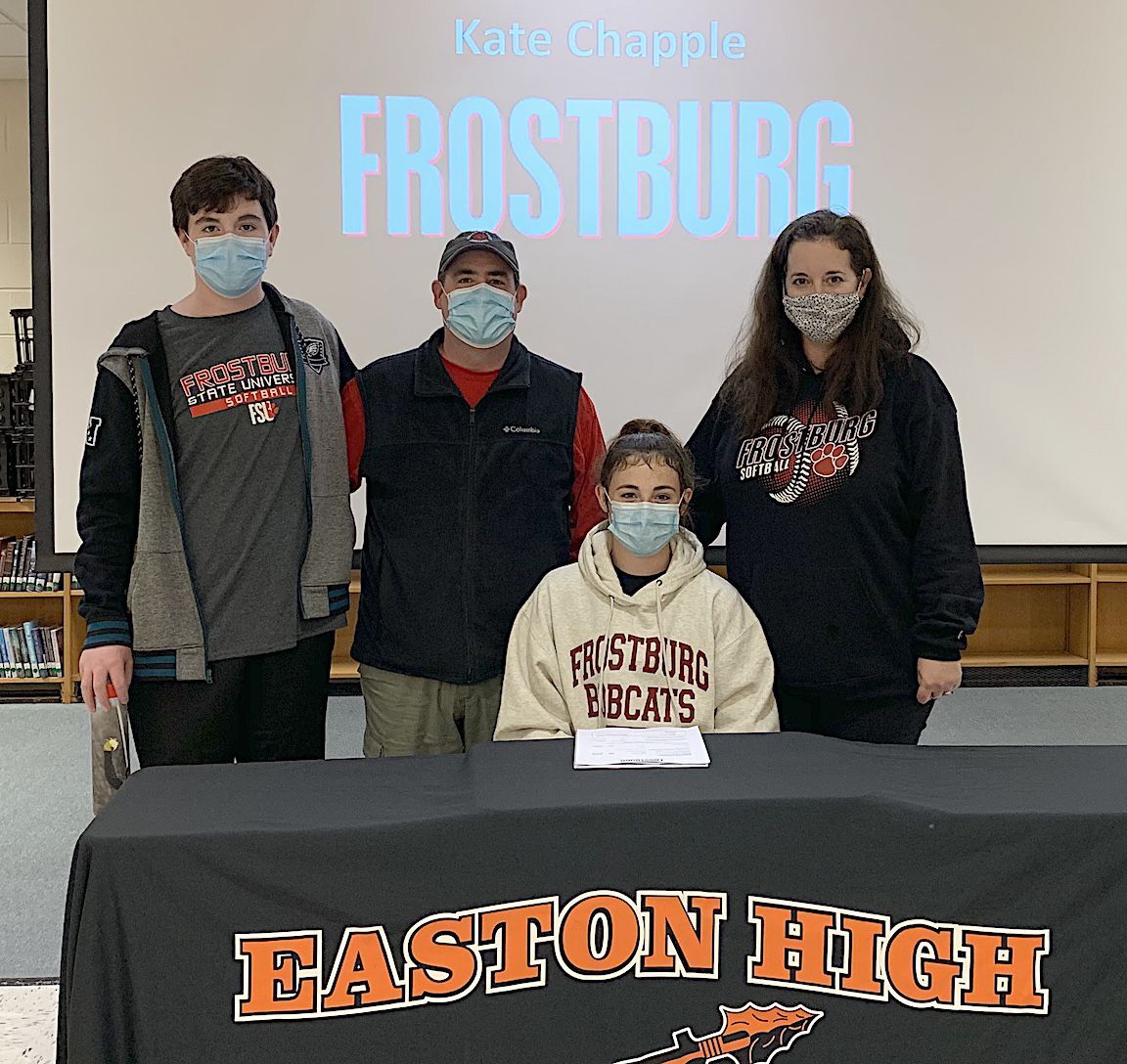 EASTON — It wasn’t if they were going to play in college, but where.

Easton High seniors Lily Osborne, Emily Strother, Morgan Lewis, Kate Chapple and Jaden Tipton stamped their destinations Wednesday afternoon, when they signed their national letters of intent inside the school’s library to take their athletic talents to the next level.

“Right as I stepped on campus it just felt like home,” said Osborne, who is headed to Loyola University for lacrosse. “I just loved the team. And the facilities and coaching staff are more than I can ask for.”

Osborne played three years of varsity soccer, and has also been a standout guard for the Warriors’ girls’ basketball team, which was set to play in the program’s first state semifinal in 26 years last spring when the COVID-19 virus canceled the state playoffs. She initially thought of playing soccer in college. That didn’t last.

“Just one game of lacrosse changed all that,” said Osborne, who played midfield in high school and for her club team, the Lady Blue Crabs. “I just fell in love with it going into high school. And I knew I wanted to play lacrosse in college.”

Osborne totaled 38 goals, 20 assists and 55 draw controls her sophomore year, helping Easton to an 11-4 record that ended with a loss to Queen Anne’s County in the Class 2A East Section II semifinals. The 2020 lacrosse season was canceled because of the coronavirus pandemic.

“In my opinion, Lily is one of the best players ever to come out of Easton High School and probably the most dynamic player I’ve ever had the opportunity to coach,” former Warrior girls’ head lacrosse coach Robert Smith wrote in an email. “Lily’s combination of speed, quickness and power makes her one of the most feared players in the Bayside Conference.

“Lily made an immediate impact as a freshman and has been a star ever since,” Smith continued. “As great of a player as Lily is, she’s equally impressive off the field. Jen Adams is so lucky to be getting her at Loyola.”

Like Osborne, Strother played soccer through the youth ranks and for the Warriors, but she always knew lacrosse was the sport she wanted to pursue in college.

“I just found my love for lacrosse when I was younger and that’s what I wanted to stick with,” Strother said. “Probably middle school, my seventh grade year, I really got into it and was like, ‘I really want to do this when I’m older.’”

A two-year member of the varsity, Strother has played defense and some midfield for the Warriors and the Lady Blue Crabs, and now takes her skill set to Radford (Va.) University.

“I just found my niche there at that school,” Strother said. “As soon as I saw it I loved it completely. And I wouldn’t choose anywhere else than there.

“I think it’s crazy just because I never thought I would actually get an opportunity like this,” Strother said of playing at the Division I level. “And now seeing it, it’s, like, eye-opening.”

Among those who don’t think it’s so crazy is Smith.

“Emily is a tenacious defender that brings toughness to any team she is on,” Smith wrote in an email. “Emily really came on as a sophomore and has been one of the leaders of Easton’s defense ever since. Emily’s stickwork has improved so much over the years, hopefully she will get a chance to show it on both ends of the field this spring as a senior at Easton High School.”

Lewis also knew well before high school that playing lacrosse was a dream she wanted to chase into the collegiate ranks.

“It’s kind of always been a goal,” said Lewis, who started playing club ball for Maryland United in elementary school. “When we start on United, your goal is, you start in elementary school, they get you ready to play for middle school, and then middle school to high school. And then once you hit high school, it’s getting you to play college at the next level, or finding a path that’s going to work for you, whether it’s D1, 2 or 3, or club. I kind of knew it was always going to be that path, but just never knew exactly where I was going to end up.”

“It was an adventure going down there, being so far from home,” said Lewis, who plays attack. “And I also knew when I got there they were going to push me to be a better player than what I have been. And the team aspect and the family aspect was really important to me. They’re such a family down there.”

“She is a very confident young lady,” Cimaglia said. “She’s always a leader on our team. She’s always looking to improve. She’s the one person that when the game’s on the line we put her on the field. She’s always coachable. Just real excited to have her take the step to the next level, and know she’s going to do very, very well at the college level.”

Chapple had serious doubts she would even get the chance to play at the next level, after COVID wiped out her junior season of softball.

“I didn’t know what was going to happen,” said Chapple, who blossomed into the Warriors’ ace her sophomore year. “When dead (recruiting) period started coming out, college coaches weren’t going to be able to talk to us. They weren’t going to be able to come see us. I did not think I was going to college for softball, honestly. And with the extra year of eligibility that (college) players were going to get (for losing last season to COVID), I didn’t think schools were even going to be looking at girls from my class.”

Frostburg State University thought Chapple was worth enough of a look that it offered her a spot on the team.

“I just love the campus,” Chapple said of Frostburg, where she plans to study law. “I love the coaches. I love the girls that are going to be there with me. I’ve already played with some of them. I’ve met them all. I just really like everything about it. It makes me feel at home.”

Chapple lost the first game of her sophomore year and never lost the remainder of the regular season, crafting a North Bayside-best 10-game winning streak that reached 11 in the playoffs. She finished 2019 with a 2.294 earned-run average, striking out 111 and walking just 20 over 79 1/3 innings that included four shutouts.

Despite having the high school season canceled, Chapple did pitch in five tournaments this summer with her travel team, the Virginia Glory.

Chapple may see a familiar face on campus from time to time, as Tipton is also headed to Frostburg State after an impressive junior season in the pool.

“He’s come a long way,” Warriors head swim coach Kara Erskine said of Tipton. “He definitely had big goals in terms of wanting to get his name up on the (school) record board. He had certain times he wanted to hit in some of his events. And he did that.

“We were always very impressed with his ability to harness that motivation and turn it into energy that would actually translate into results,” Erskine continued. “A lot of kids talk a big game but they don’t put it up. He could do it.”

Tipton put up a new school record in the 100-yard freestyle his sophomore year, when he clocked a mark of 49.16 seconds. Then came a banner junior season, when he set school records in the 50 freestyle (22.43) and 100 butterfly (53.33), joined David Gardner, Josh Newmier and Johnny Remaniak of the record-breaking 400 freestyle relay (3:16.10), and teamed with Remaniak, Colin Kelly and Corey Wazniak on the 200 free relay, which established a new Warrior standard of 1:32.37.

“I always knew I wanted to swim in college,” Tipton said. “I’m really truly passionate about swimming; picked it over every other sport because of it. But it’s hard to believe that I made it D2. I never really thought … especially get a scholarship to swim? I never thought that would happen.”

Tipton looked at a number of schools, but liked what he saw at Frostburg.

“The coach is really nice and the academics really fits the field I’m going into,” said Tipton, who plans to study computer science. “I looked at a bunch of other schools and got accepted to most of them. I just chose Frostburg.”