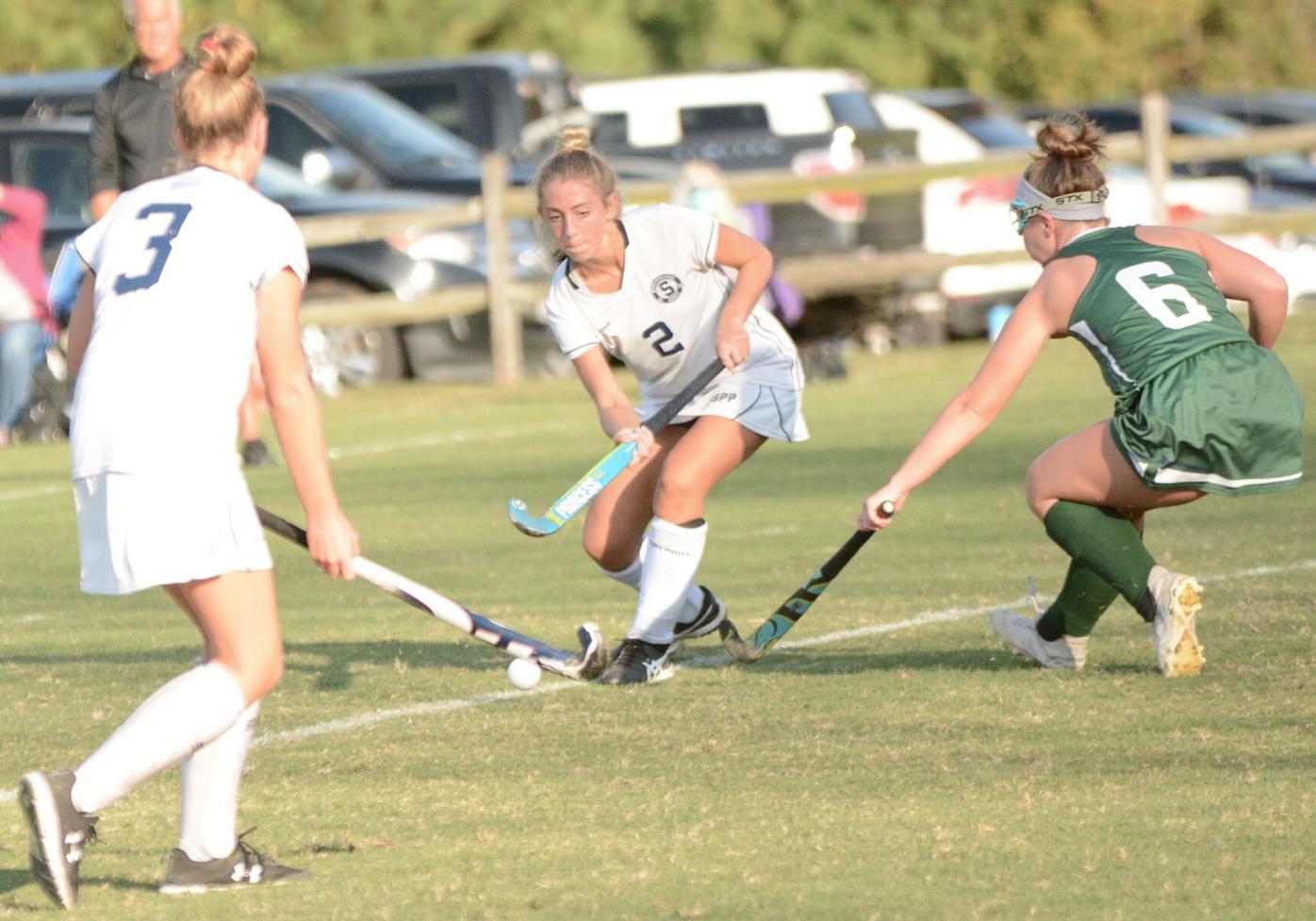 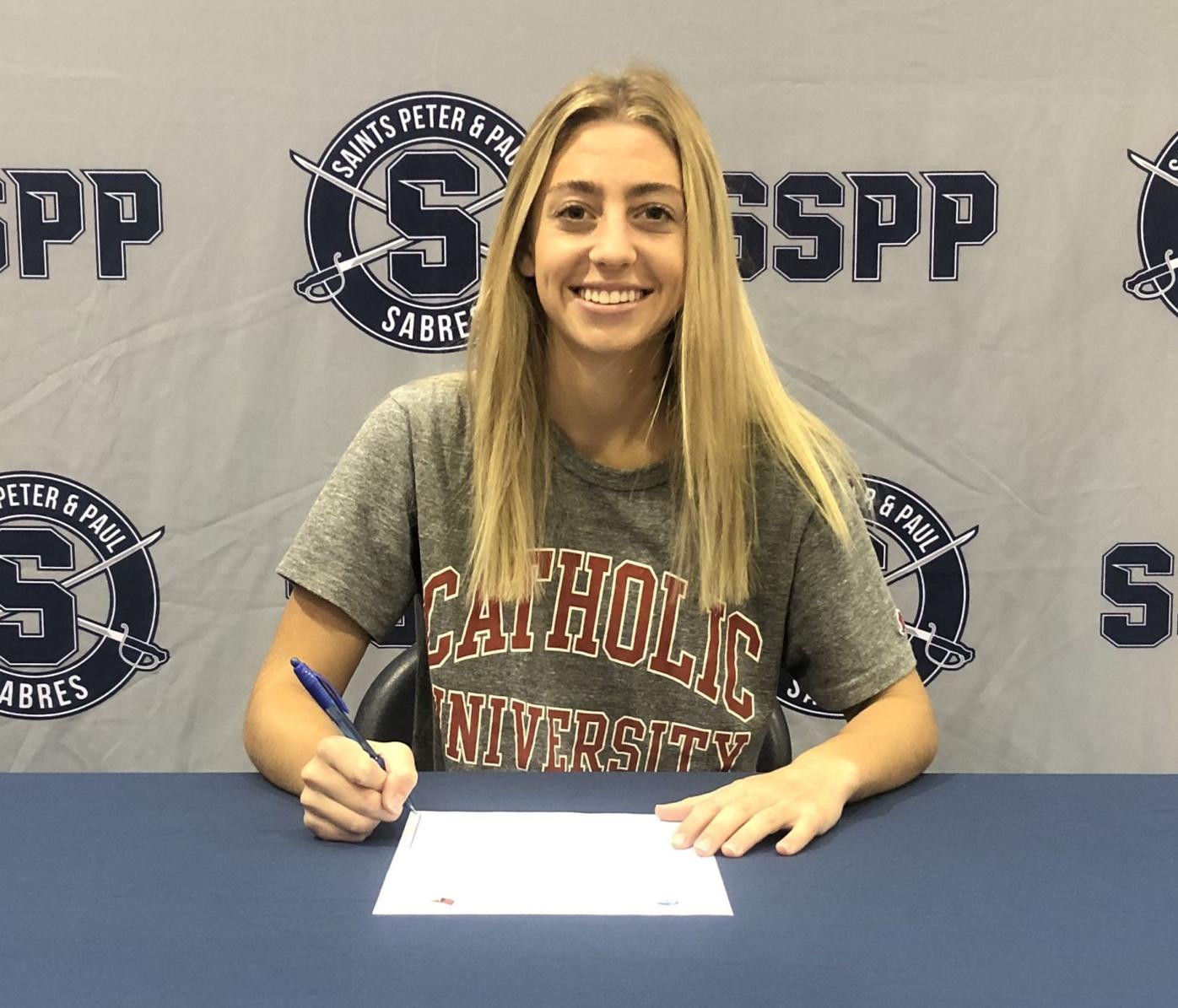 One month after helping the Sabres to the ESIAC title, Nancy McGettigan signed to play for Catholic University next fall.

One month after helping the Sabres to the ESIAC title, Nancy McGettigan signed to play for Catholic University next fall.

And so after three years on the sideline — the last of which included starting and juggling her own physical therapy business — McGettigan stepped down as head field hockey coach at Saints Peter & Paul High after the 2019 season.

She remained on the sideline as the Sabres’ scorekeeper this fall, free of all coaching duties and watched an abbreviated six-game season — created by the COVID-19 pandemic — unfold.

She watched as Saints Peter & Paul lost its season opener to Holly Grove, the same school that had defeated the Sabres by one goal the year before in the Eastern Shore Independent Athletic Conference championship.

She watched as Saints Peter & Paul rebounded with three consecutive victories — all by shutout — to earn a title rematch with the Eagles. And she watched as the Sabres capped their season with a dramatic 4-3 overtime victory over Holly Grove for their first ESIAC field hockey championship since 2011.

“Way more enjoyable,” McGettigan said of being a spectator. “Just because when you’re coaching you have to watch everybody. You’re not watching just where the ball is and who’s got the ball. You’re watching what everybody’s doing. So it was nice to kind of follow along the ball movement.”

Making the season even more enjoyable for McGettigan was the chance to follow her daughter Nancy McGettigan, the Sabres standout center midfielder, who was smack dab in the middle of the championship run, netting two assists and two goals in the final to earn the tournament’s most valuable player honor.

One month later, Suzanne was again watching, as Nancy signed to play field hockey for Catholic University next fall.

“At first I thought I wanted to do Division I,” Nancy McGettigan said. “And then I quickly realized I want to go to college to also get my studies done, but I also want to have time for a social life as well — have like a bit of a mix. And I also wanted to study abroad, and those were some of my big things.

“So when I started looking, I heard about Catholic and I saw it was in D.C.,” Nancy continued. “And I had also really wanted to be in a city. The more I looked into it, it just like ticked off all my boxes. It’s in the city. It’s Division III. And after talking to the coaches I would be able to still study abroad. I talked with the coach a lot and I felt like all of our conversations went so well. I went for a visit in September and it was my third time on campus and it just felt like home. And that was it.”

Nancy played in the area’s youth soccer and lacrosse leagues growing up. But at the suggestion of her father Doug, she gave field hockey a shot. And that was it.

“I got started in sixth grade,” Nancy said. “It was actually my Dad, that was like, ‘Oh, why don’t you try field hockey?’ And I tried it and I loved it. I just like kept going to higher levels. And I fell in love with it.”

Nancy, who played club ball for the Delaware-based Gottaloveit Oranje, started competing in recruiting tournaments as a freshman, playing in two to three a year.

“I would get a list of the colleges in attendance and I just searched them all,” said Nancy, who had an interest in Division II Newberry (S.C.) College, but never had the chance to visit the campus because of the coronavirus. “I had an idea where I wanted to go. Like, I didn’t want to stay in Maryland. I’m still a little bit further from home, but my parents can still come and watch me.”

Suzanne and Doug wondered if they’d have the chance to watch their daughter play her senior year. COVID-19 had erased the normal fall schedules for most schools — private and public. But ESIAC athletic directors conferenced and cobbled together a short season that gave league members a chance to play, with the two teams with the best records meeting for the championship.

Debbie McQuaid, who succeeded Suzanne McGettigan as head coach, began her second stint with the Sabres wondering if there would actually be a season because of the unpredictability created by the virus. But as she held preseason practices, McQuaid recognized she didn’t have to wonder a whole lot about was who was going to be at center midfield — Nancy McGettigan.

“To be quite honest, I didn’t know where she played last year,” McQuaid said of Nancy. “I just like that center-mid to be the quarterback of the field. And that’s her.”

While McQuaid’s quarterback was happy to be playing, there was something else she wanted this season — a championship.

As a freshman, Nancy was on the Sabres team that reached the ESIAC final undefeated, only to lose to Holly Grove in the championship. Saints Peter & Paul didn’t make it to the final in 2018, but was again pitted against the Eagles in last year’s title game, where it suffered another heartbreaking defeat.

Nancy may have felt this season was going to be more of the same as the Sabres built a 2-1 lead against Holly Grove in the season opener, then watched the Eagles net three fourth-period goals for a 4-2 victory.

Saints Peter & Paul recovered nicely, winning its next three games in impressive fashion to set up a rematch with Holly Grove in Westover. Nancy gave the Sabres a 1-0 lead late in the first quarter of the championship when she slammed a drive into the back of the cage. But Saints Peter & Paul’s center midfielder admitted a tinge of here-we-go-again when the Eagles scored twice in the second period for a 2-1 halftime lead.

Gennie Webb, the Sabres outstanding freshman, knotted the score with 1 minute, 32 seconds left in the third period. Then 41 seconds into the fourth period, a Holly Grove player was ruled to have kicked the ball off the goal line as Saints Peter & Paul pressured the Eagles net. Nancy stepped up to take the ensuing penalty stroke and drove it into the left side of the cage for a 3-2 Sabres lead.

Holly Grove scored the equalizer with 7:55 remaining in regulation to forge overtime. On its fifth penalty corner of the extra period, Saints Peter & Paul’s Joy Perry made an insertion feed, then watched McGettigan and Webb put on a mini-passing clinic before Webb took a final pass and whacked it into the goal for the game-winner, sending the Sabres into celebration.

“I was like, ‘Oh my gosh. We won,’” Nancy McGettigan said. “I definitely didn’t think we’d beat them.”

McGettigan’s final pass of the season gave her eight assists for the year to go with seven goals.

“She’s got a solid game and she’s well prepared to go to the next level,” McQuaid said. “She’s always teaching the younger, less experienced kids. They all look up to her. She’s a good leader.”