Four arrests made in murder of man on bike 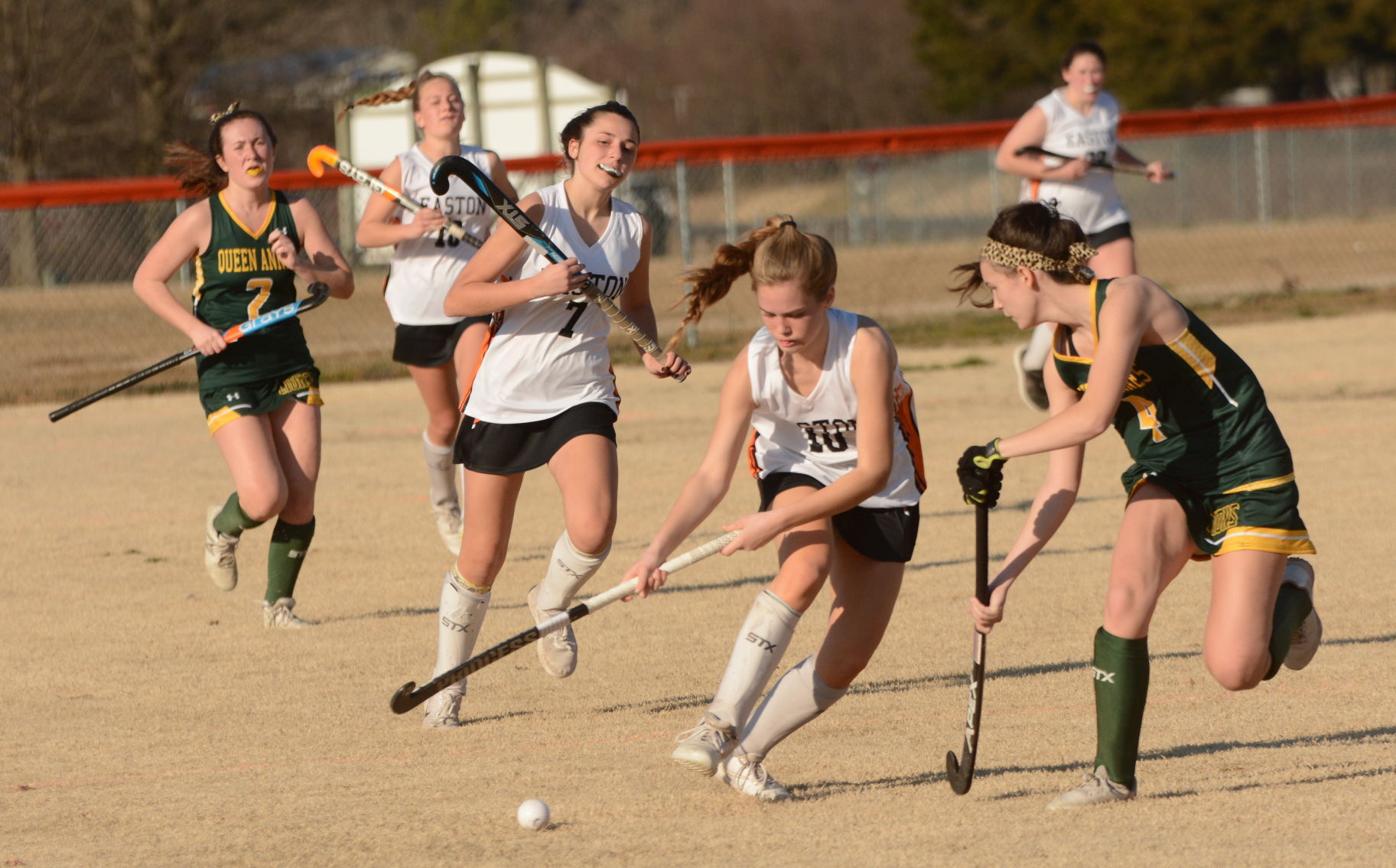 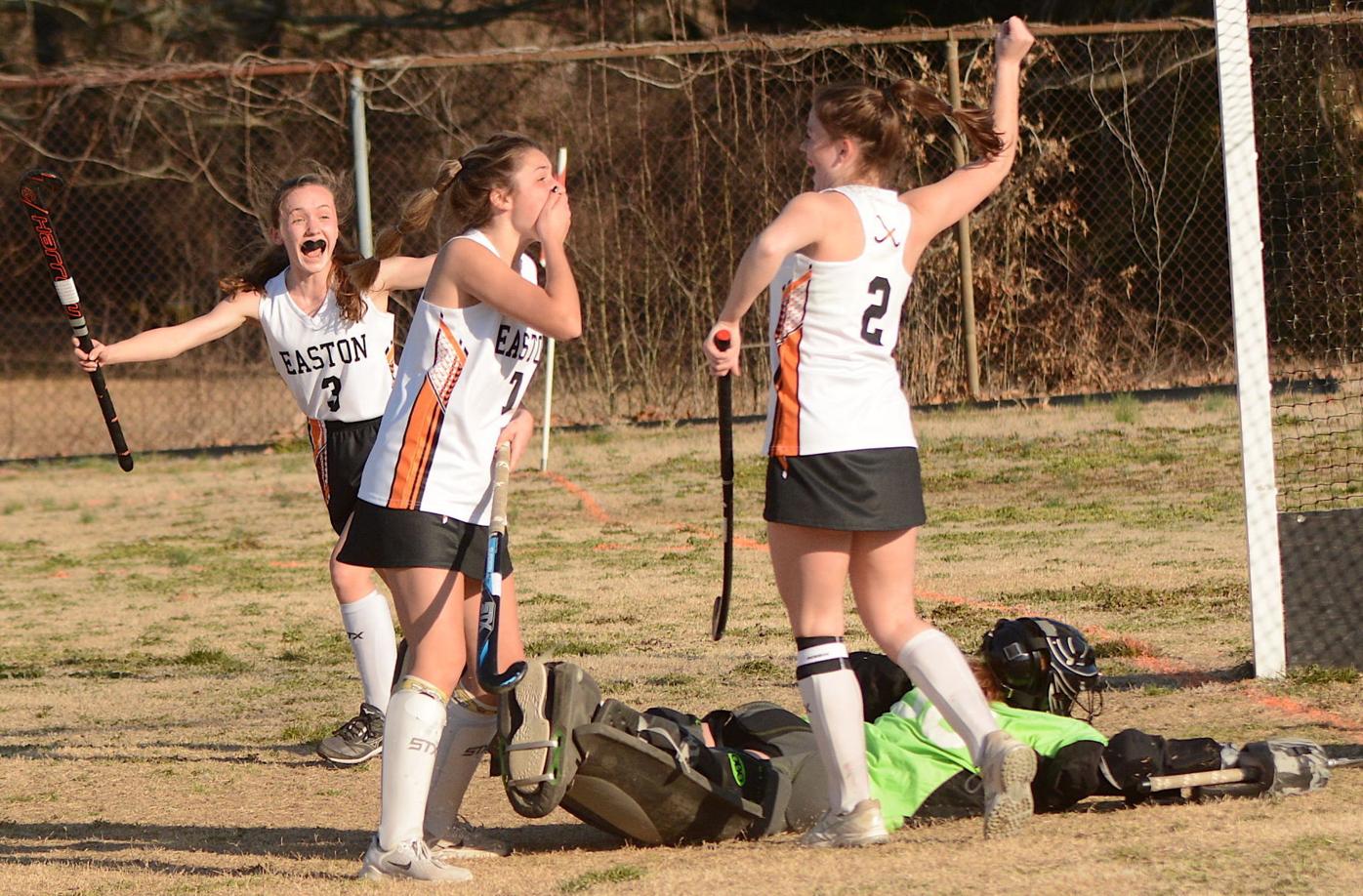 Easton’s Emily Branic (3) and Hannah Greene (7) react Wednesday after Kate Boldt (2) scored to give the Warriors a 1-0 lead. 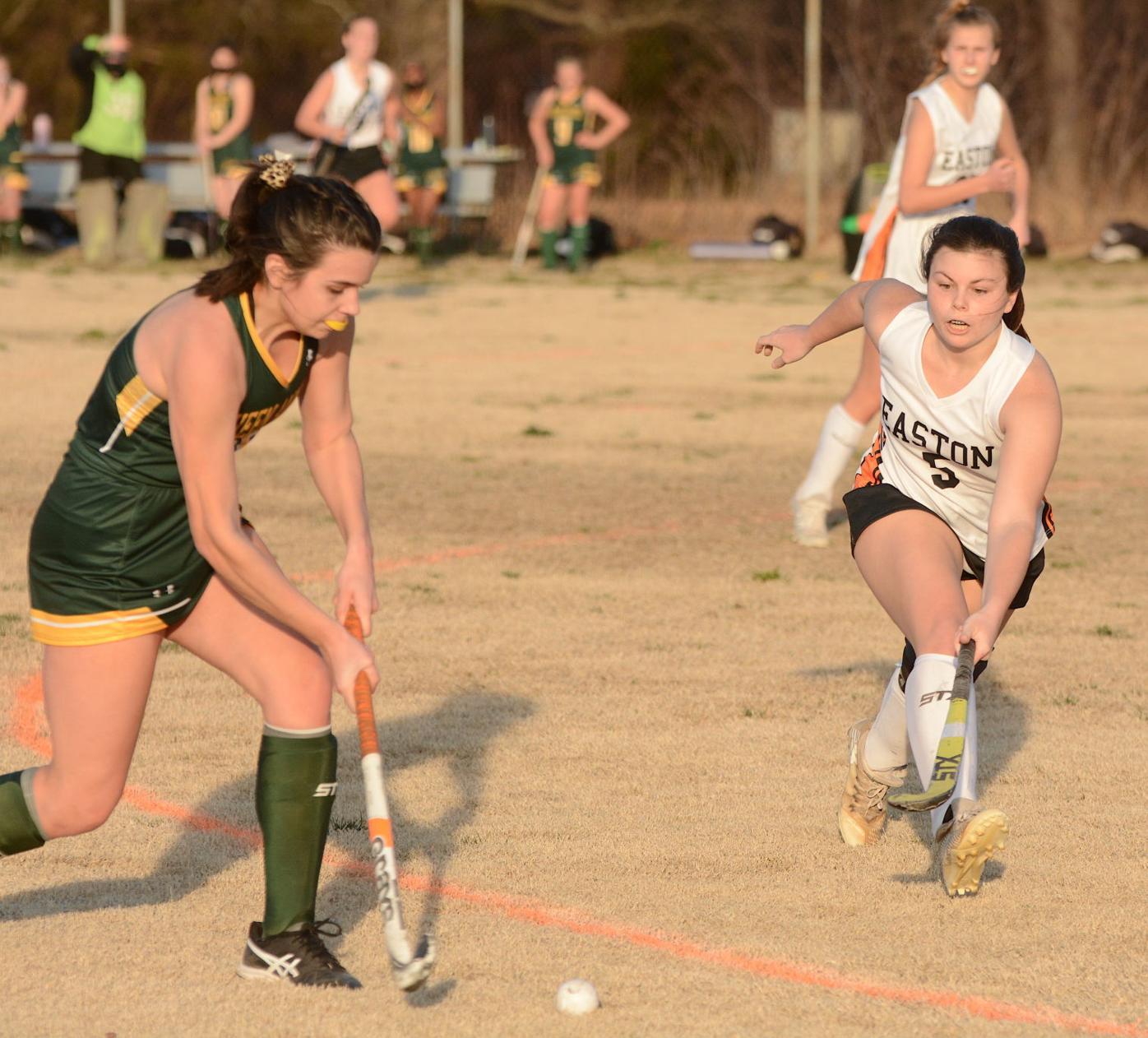 Queen Anne's Kamryn Brandt, left, pushes toward the circle as Easton back Chloe Briner closes during Wednesday's second half. 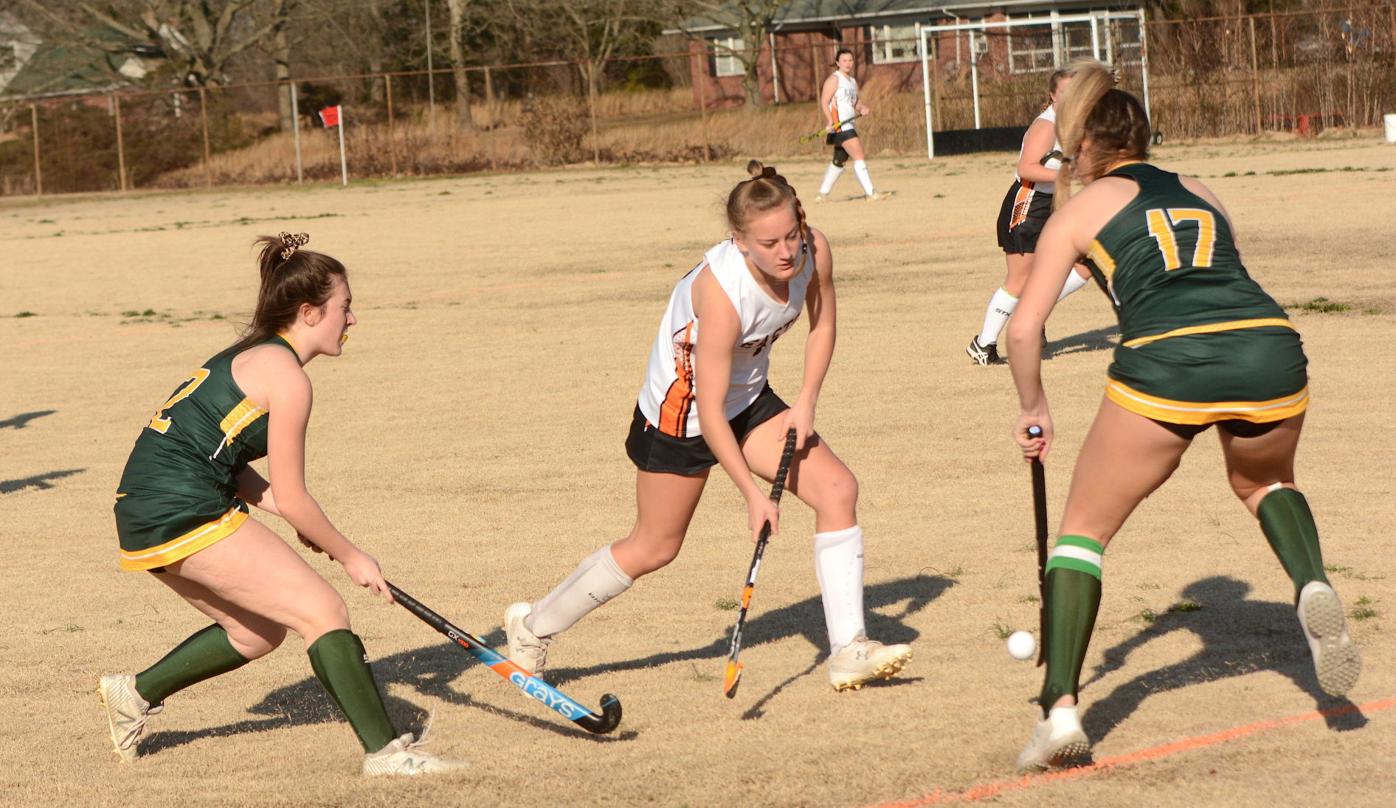 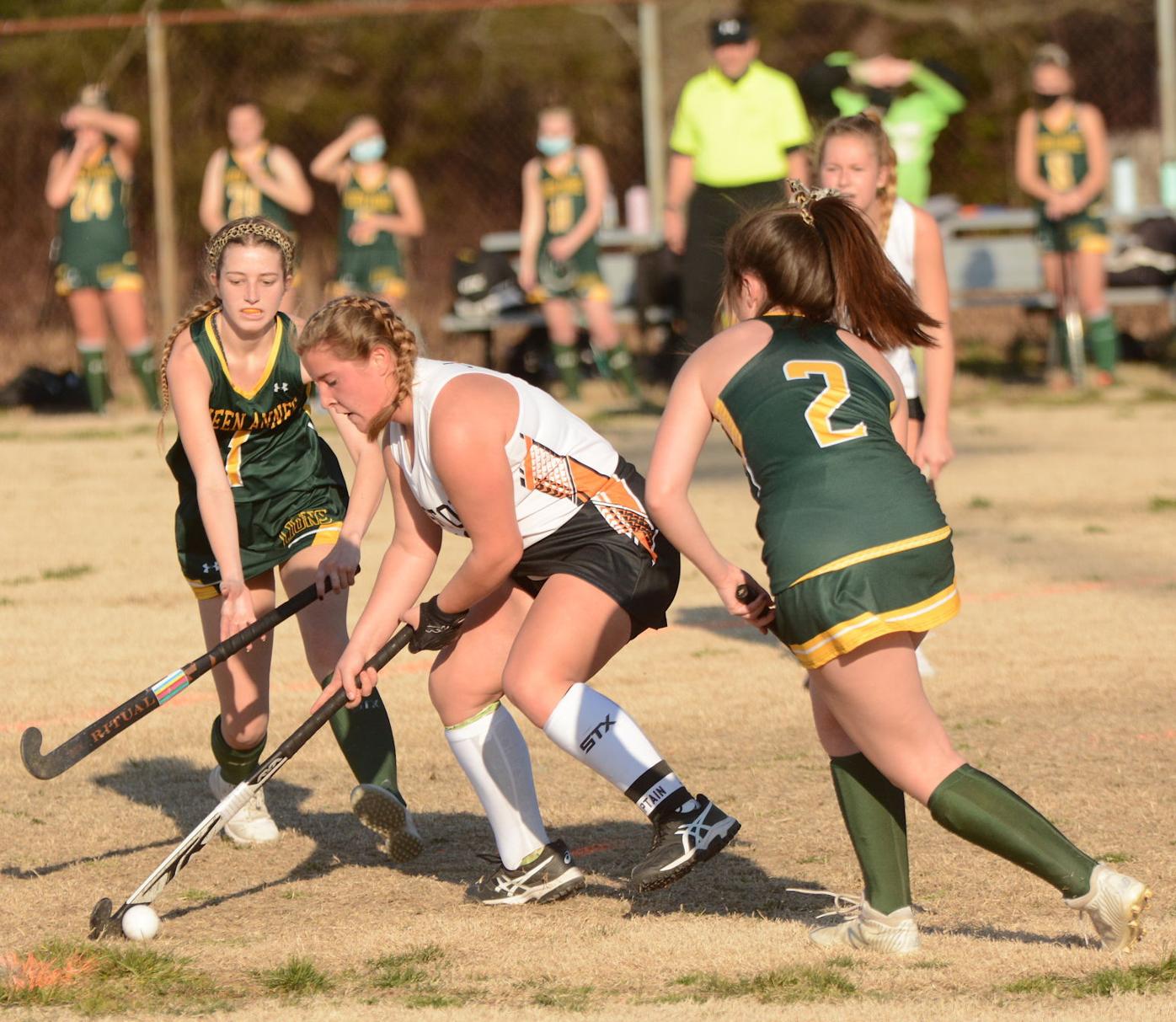 Easton’s Emily Branic (3) and Hannah Greene (7) react Wednesday after Kate Boldt (2) scored to give the Warriors a 1-0 lead.

Queen Anne's Kamryn Brandt, left, pushes toward the circle as Easton back Chloe Briner closes during Wednesday's second half.

EASTON — Alli Szymanski wasn’t kidding when she said her team has strength everywhere.

Easton High’s first-year head field hockey coach watched her team deliver solid performances in all three parts of the field Wednesday en route to a 2-1 victory over Queen Anne’s County, the Warriors’ first victory over the Lions since the 2017 regular season.

It certainly looked that way on this sunny late-winter afternoon, as the Warriors (2-0) collected more shots and penalty corners over the first three periods while building a 2-0 lead heading into the final 15 minutes.

“I think that has been my main focus, is to be able to instill confidence in the girls, and say, you’re going to step out on that field and you are going to say, ‘I’m going to win this game,’” Szymanski said. “I don’t care who I’m up against. I’m going to win it.’”

Though there are no playoffs in this COVID-19 abbreviated fall season, Queen Anne’s (1-1) has long been a Bayside Conference and regional-title contender under head coach Shana Corder, still has the tag of defending Class 2A East Region I champion, and had won the last three meetings with Easton, all by one goal.

But the Warriors seemed to play with more intensity from the start, and took a 1-0 lead with just under 10 minutes left in the second period, when senior Kate Boldt slipped Olivia Brown’s feed past Lions goalie Belle Fields.

“We’ve been practicing our corners a lot,” said Boldt, whose goal came off a corner. “We got a good hit in from Olivia Brown and then I tapped it in.”

Fields (seven saves), who is headed to York (Pa.) College to play in the fall, kept it a one-goal game. The senior goalie rushed from her cage to stop a close-range shot with 6:55 left in the second period, smothered a shot at the left post in the fourth minute of the third, then hit the deck again to cover a shot 6 minutes later.

“Belle had a phenomenal game as always,” Corder said.

Queen Anne’s got its best shot on goal with 9:30 left in the third, but Easton goalie Aubrey Lavezzo came off her line to stop the drive with her feet, then watched the follow roll wide left.

Easton cushioned its lead with 5.4 seconds left in the third, when sophomore Ella Chandler received a crossing pass from right wing and lifted it past Fields’ shoulder for a 2-0 lead.

“We were running down the far right side and I was in the circle, got the ball and flipped it over the goalie,” Chandler said.

Queen Anne’s finally picked up a few corners in the fourth quarter, and converted when sophomore Alyssa Riggleman scored 3:24 remaining on a play that started with Fiona McCartin’s entry pass.

“They didn’t give up,” Corder said. “I don’t mind losing because you learn something from a loss. Two things I think they learned from today, you can’t come out with no intensity in the first and second quarter. We got behind, no big deal going into half. I had a talk with them. ‘Let’s come out, we’ve got to play our ball.’

“It wasn’t until they got the second goal where I finally I saw my team,” Corder continued. “‘OK, now we’re under pressure.’ I told them after the third, ‘You’ve dug yourself in a hole. You’re down two-oh.’ And I did see them come out of it; much better during the fourth quarter. We showed fight.”

The Lions pushed into Easton territory once more, before the Warriors gained possession and worked the ball deep into Queen Anne’s end to close the game.

STEVENSVILLE — Ella Kaufman had a hat trick and Megan Carpenter and Marley Waters each had two goals to lead the Buccaneers.

Emily Cimaglia and Grace Hines each had one goal for Kent Island.

RIDGELY — Katie Jenkins had a pair of goals and one assist, and Mecala Jones scored twice to pace the Saints (1-1).