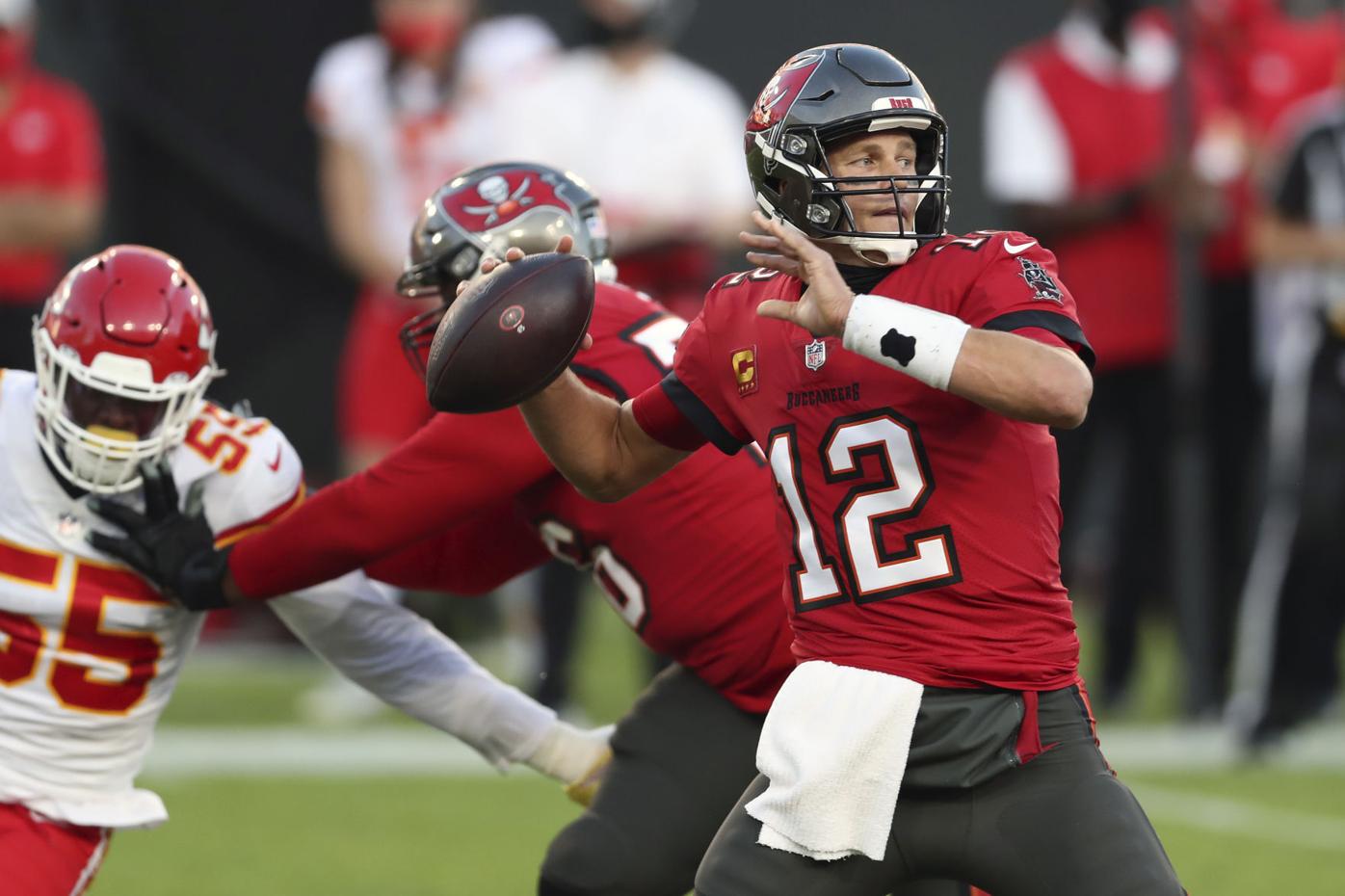 Tom Brady enters his 10th Super Bowl Sunday, aiming for his seventh title, only this time with a new outfit. 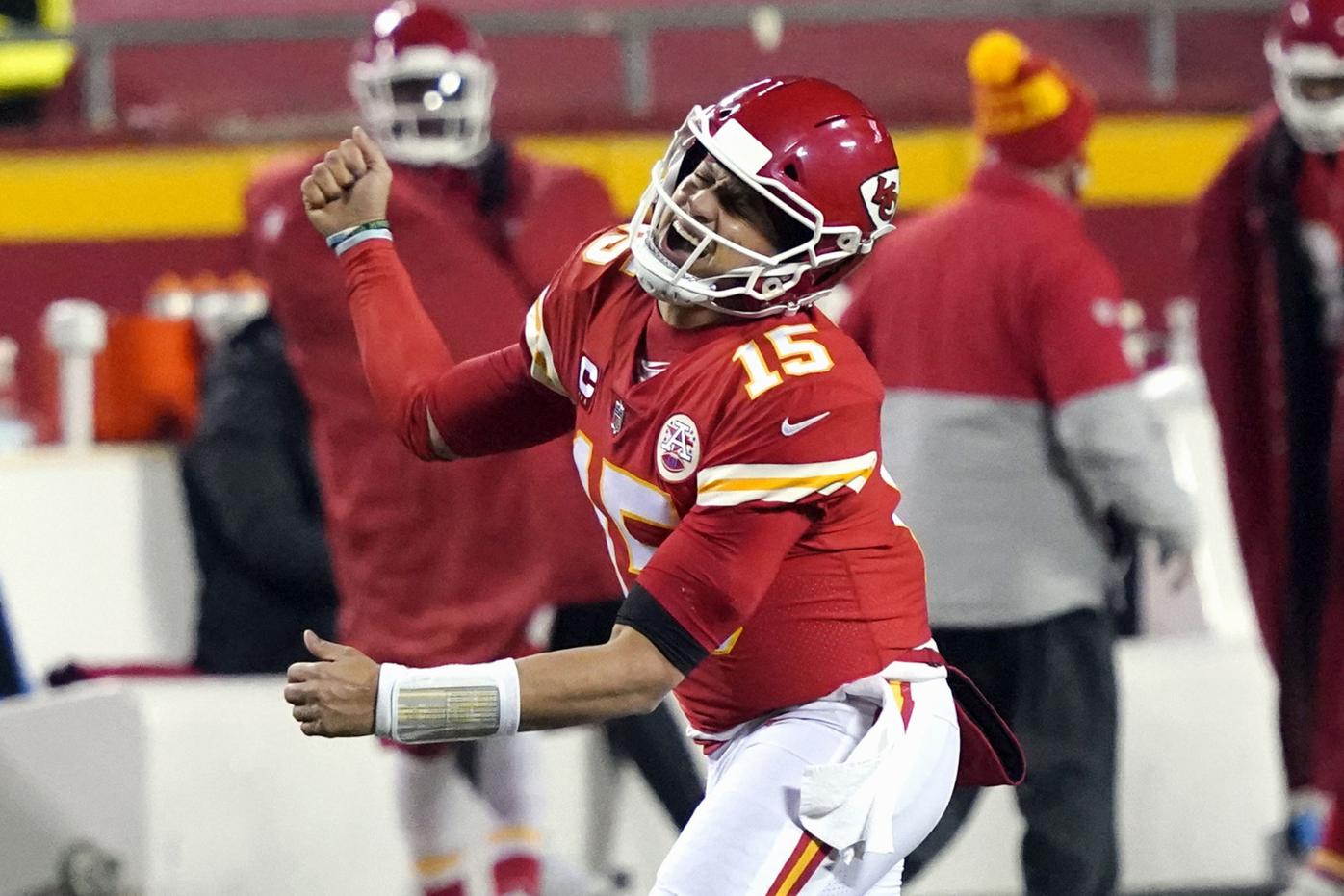 Patrick Mahomes bids for a second straight Super Bowl title Sunday with Kansas City — something no team has done since Tom Brady and New England.

Tom Brady enters his 10th Super Bowl Sunday, aiming for his seventh title, only this time with a new outfit.

Patrick Mahomes bids for a second straight Super Bowl title Sunday with Kansas City — something no team has done since Tom Brady and New England.

Someone will make history Sunday in a Super Bowl so filled with storylines it would fill a season of TV programming.

Tom Brady, already the true Game of Thrones king, going for a seventh ring. Patrick Mahomes, the apparent heir to the quarterbacking summit, seeking a second in a row with Kansas City — something no team has done since Brady led New England to the double in the 2003 and ‘04 seasons.

Brady, 43 is in his 10th NFL title game, but with a new outfit, the Buccaneers — who happen to call Tampa home. Yes, Tampa, Florida, where the Super Bowl is being played this year. Pirates of the Caribbean make port: No host team has ever played in the big one in its home stadium.

“There’s a lot that comes along with the Super Bowl,” says Rob Gronkowski, the three-time champion tight end who came out of retirement to reunite with Brady. “There’s a lot that comes along with this week. I’ve been there before. I’ve experienced it all before. But just having it at home, cutting out the travel, knowing where you can stay, where your friends can stay, where you family can stay, it just makes it a lot easier to have it at your home stadium, big time.”

Add in two sixty-something head coaches, K ansas City’s Andy Reid and Tampa Bay’s Bruce Arians, both offensive masterminds as comfortable with today’s high-scoring, creative NFL attacks as all those kid coaches who are all the rage.

“There’s nobody that would ever say a bad thing about B.A., he’s just so endearing to everybody and I think everyone wants to win for him,” Brady says of Arians, the kind of praise the quarterback rarely used about his previous head coach.

“He’s got almost like a father figure kind of role in the building and it’s because everyone loves him so much,” Chiefs unanimous All-Pro tight end Travis Kelce says of Reid. “He’s got an unbelievable way of getting the best out of everybody that is relating to all different aspects and all different forms of life.”

Don’t forget the defenses, which could easily be ignored with all the dynamism on both offenses. Tampa has probably the best set of linebackers in the NFL with Shaq Barrett, Lavonte David and Devin White, studs up front in Ndamukong Suh and Jason Pierre-Paul, and an ever-improving secondary.

KC has All-Pro safety Tyrann Mathieu, linemen Frank Clark and Chris Jones — and a coordinator, Steve Spagnuolo, who doesn’t back off.

All of this at the end of a season played during a pandemic, yet not delayed, with no games canceled, and each of the Super Bowl participants experiencing relatively few COVID-19 setbacks.

“I think with the pandemic and the sacrifices they have all made for each other, they go to work and go home,” Arians says. “They don’t get to sit and eat together, don’t get to have conversations, it is amazing to me how close they are. It is the commitment they made to each other to beat the virus.”

The NFL and Florida health officials have approved about 22,000 fans and all will be required to wear masks. Raymond James Stadium normally has a capacity of 75,000 fans.

Playing before real people rather than just cardboard cutouts — oh, there will be plenty of those, too, with proceeds donated to local charities — has been rare in the NFL all season. But both the Chiefs and Buccaneers were among the few teams to have fans on hand for some games.

Their paths to the championship game have been divergent, though. The Bucs (14-5) finished second in the NFC South to the Saints, sending them on the wild-card route. That meant trips to Washington, New Orleans and Green Bay. And now, staying home.

The Chiefs (16-2) had the top seed and lone bye in the AFC, then outlasted Cleveland with Mahomes sidelined for nearly half the game before routing Buffalo.

Of course, with the week off between the conference title matches and the Super Bowl, each side should be well rested. The only perceivable edge might be the Chiefs needing a plane ride to the game site while the Bucs could drive over to RJS.

By Sunday, they will be as eager as possible to get back on the field and write the final chapter to an unfathomably atypical season.

“You don’t get these opportunities every year in the NFL to be in the Super Bowl and to be in these games,” Mahomes says, thought it sure seems as if Brady has a Super Bowl habit, and Mahomes is developing one. “So you don’t want to look back and have regrets on how you played or how you went about the week before preparing to go out there to play your best football.

“When the end of your career is done, then you can kind of look and see where those moments were in your career where you could’ve had something or that you executed and you did go out there and achieve your dreams.”