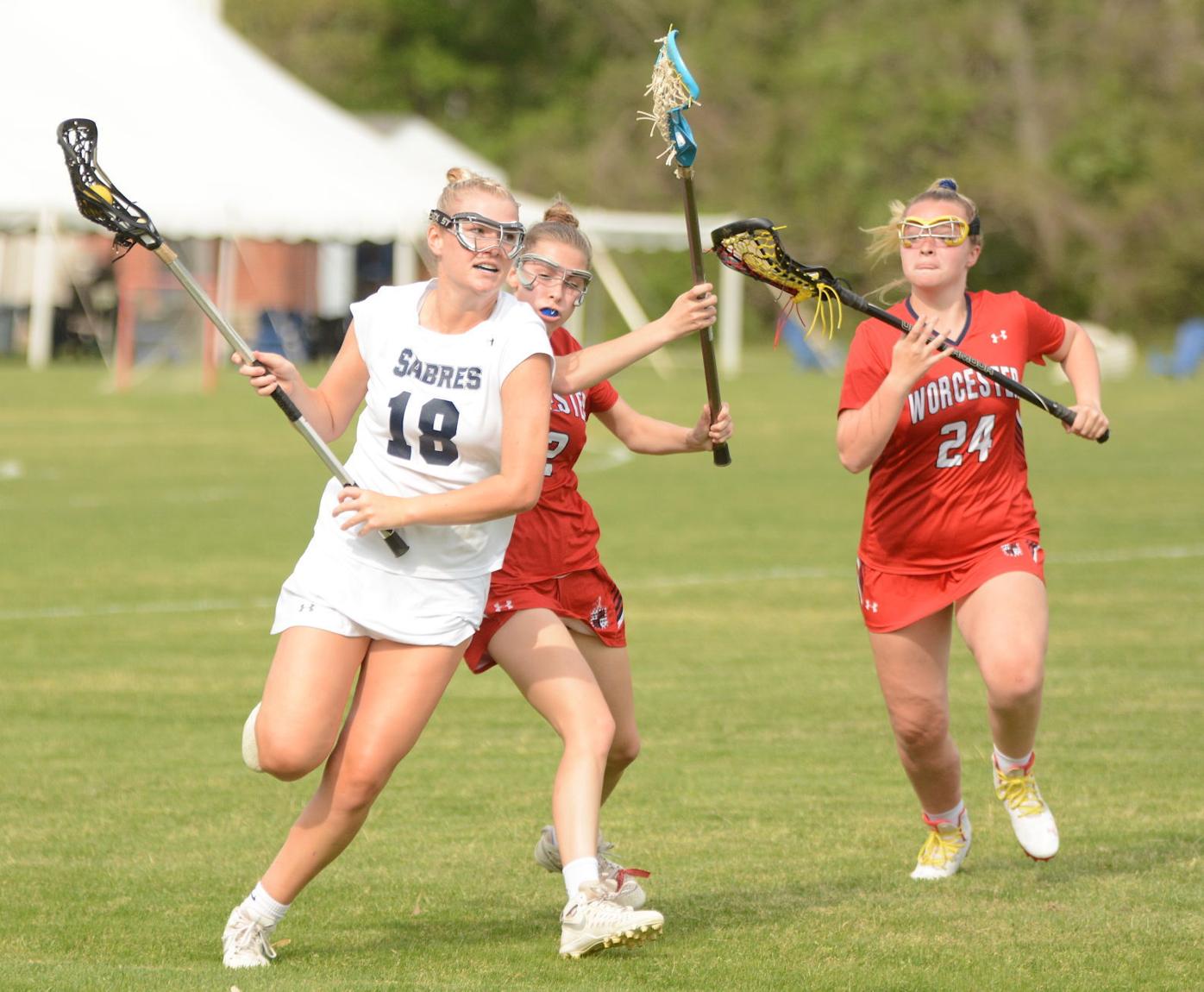 Saints Peter and Paul’s Leila Robinson (18) carries through the midfield during Thursday’s first half against Worcester Prep. 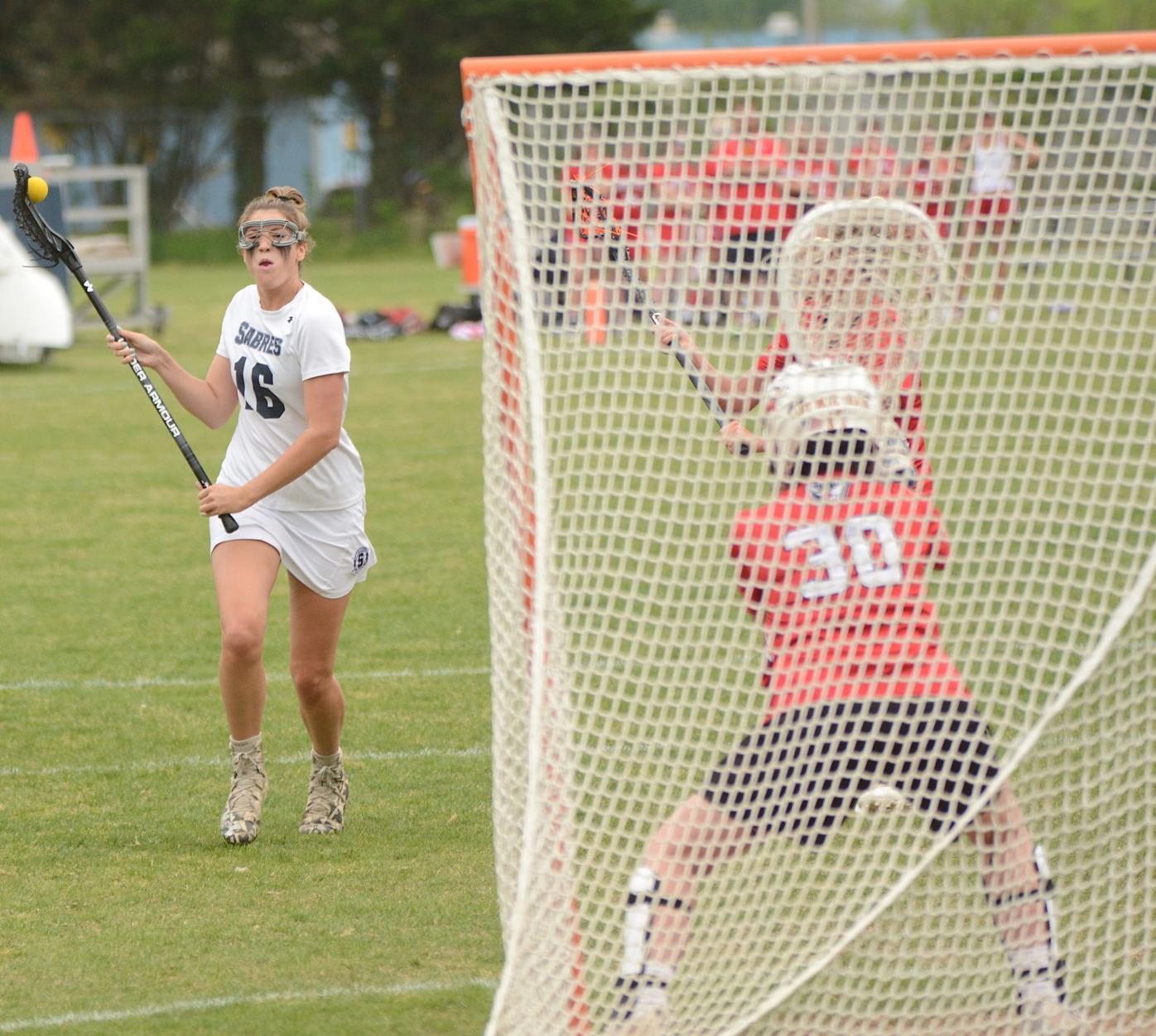 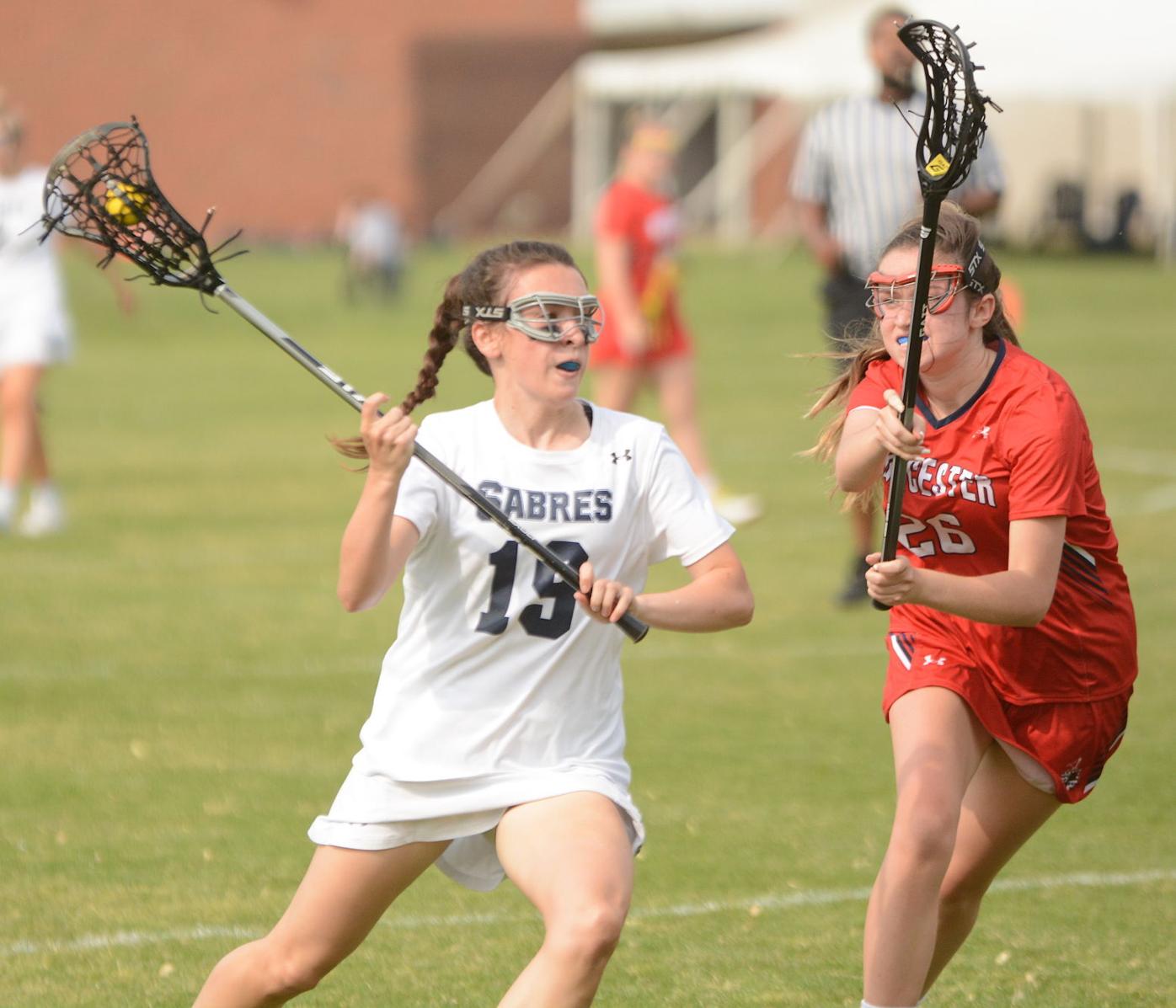 Saints Peter and Paul's Evelyn Murphy (19) had three goals and an assist during Thursday's victory over Worcester Prep.

Saints Peter and Paul’s Leila Robinson (18) carries through the midfield during Thursday’s first half against Worcester Prep.

Saints Peter and Paul's Evelyn Murphy (19) had three goals and an assist during Thursday's victory over Worcester Prep.

But Mallards head coach Chris Williams happened to catch the Sabres’ middle school team that same year and knew something was percolating.

“You could tell there was a wave of talent coming,” Williams said.

The Sabres rode that wave Thursday afternoon to perhaps the most lopsided victory they’ve ever registered against their longtime rival, as freshman Morgan Quade netted six goals and six assists in a 19-1 rout of the Mallards on senior day.

“They are a talented team,” Williams said of Sts. Peter & Paul, which has won seven straight since a season-opening loss to Gerstell Academy. “And we knew it coming in. Their entire team, top to bottom (can score). That is tough to game plan against when they have so many high quality skill players, who are not only athletic, but who can throw and catch like they’ve been playing lacrosse for 10 years.

“Their lax IQ is good,” Williams continued. “Their stick skills are good. And they’re athletic. It’s a tough matchup.”

And yet as impressive has the Sabres (7-1 overall, 4-0 ESIAC) have been this season, seniors Caroline McKelvy and Joy Perry, who had never beaten Worcester prior to yesterday — never expected anything like this — an 18-goal margin of victory and a running clock?

“Insane,” McKelvy said. “We were really kind of scared before the game. But we went out there and did our thing.”

It took all of 28 seconds for that fear factor to evaporate as Perry (four goals, assist) scored on a free-position opportunity.

A little over two minutes later the Sabres got another goal, as Quade set up fellow freshman Emmary Sweeney (two goals, four assists) for a 2-0 lead. McKelvy, who won 11 draw controls, won the following draw and Sts. Peter & Paul hurried down field again. The game had just crept into its fifth minute when sophomore Hattie Messick (four goals) assisted on Quade’s first strike.

Forty seconds later, Sabres sophomore goalie Katie Bryan (seven saves) foiled Myranda Beebe’s free-position chance. Sts. Peter & Paul sprinted toward the other end before McKelvy passed to Perry for a 4-0 lead. Quade made it 5-0 a little over a minute later.

The Mallards (4-2) missed a free-position opportunity, then were denied by Bryan on a second. Messick scored with 14:25 left in the first half. A little over two minutes later, sophomore Evelyn Murphy (three goals, assist) buried a free-position chance into the right side of the net for a 7-0 lead that prompted a Worcester timeout.

“Everyone on the team is confident with their abilities,” McKelvy said.

“Definitely,” Perry chimed. “All our shots are confident because they go in most of the time.”

“And then all our plays we know what we’re doing,” McKelvy added. “Our coach has helped us do those plays right at practice, and then we just do the exact same thing on the field.”

Sts. Peter & Paul continued executing over the final 12 minutes. Sweeney passed to Quade, who made a sparkling backhanded swipe on the ball for an 8-0 lead. Murphy set up Perry and Messick in succession for a 10-0 bulge, scored a goal of her own, then watched Messick cap the first-half onslaught with a free-position score 19 seconds before halftime.

“I did not expect to dominate the way we did,” said Sabres head coach Alison Beyer, who has watched her team outscore its ESIAC opponents 87-4 this season. “I knew with the way we’ve been playing that we were going to execute positively. But I did not think we were going to come out dominating like we did. Like I said the other day, my girls are stronger. They’re faster. They’re smarter.”

And on this day they were also relentless, as the Sabres hounded Worcester as it tried to transitioned out of its own end. They challenged clears and scoring chances, and continued extending the lead, building a 14-0 cushion before Beebe scored the Mallards’ lone goal with 18:42 remaining in the game.

“They are just all around better lacrosse players today than they were even yesterday in practice,” Beyer said of her team. “They’re just playing smarter. Something we can try in practice one day they can do it the next day in a game like they’ve been practicing it for months. They want it. It’s all about the confidence. It really is.”

Daria Wilson and Darby Thomas each finished with three assists and McKelvy had an assist.