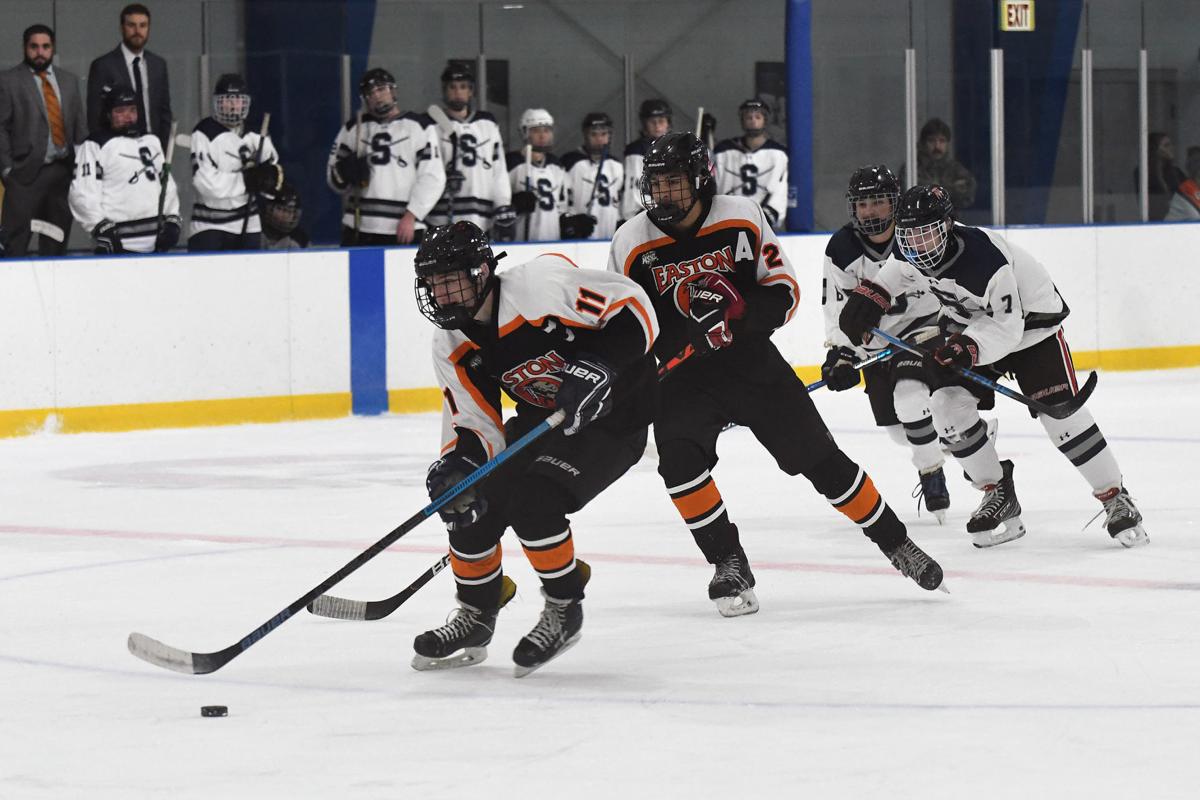 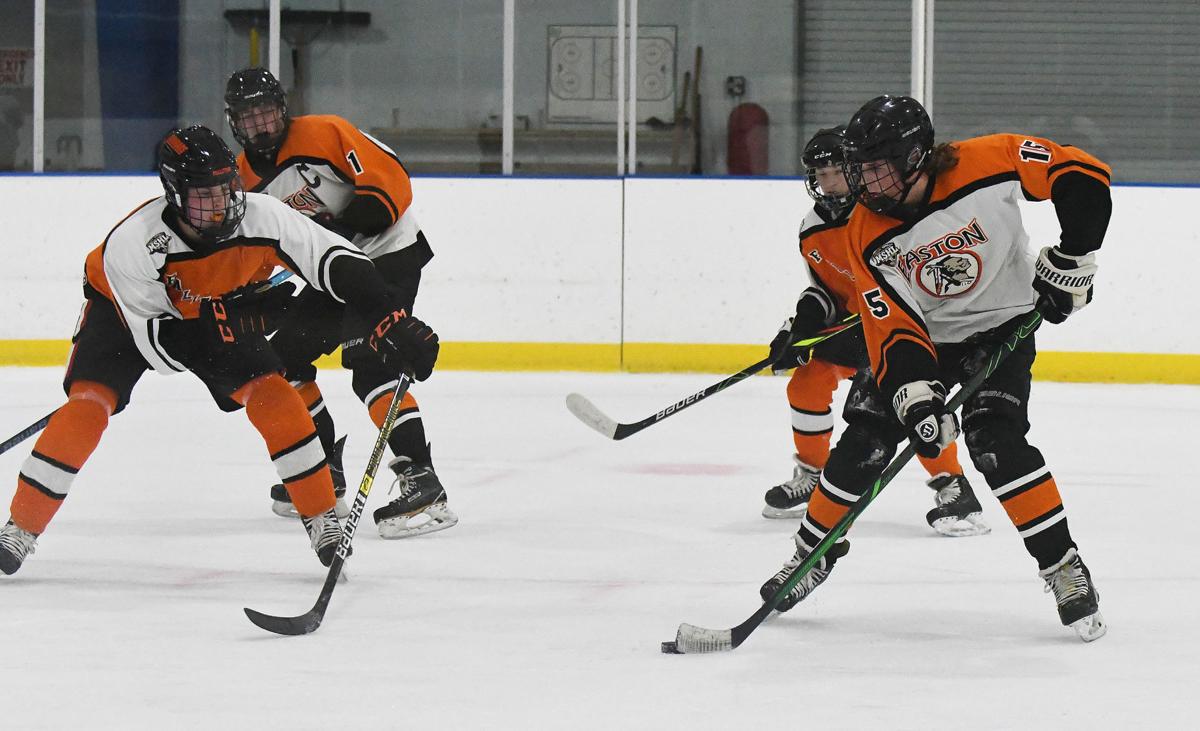 Easton sophomore Trice Weems (right) was part of a defensive unit that allowed a conference-low 17 goals during the regular season. 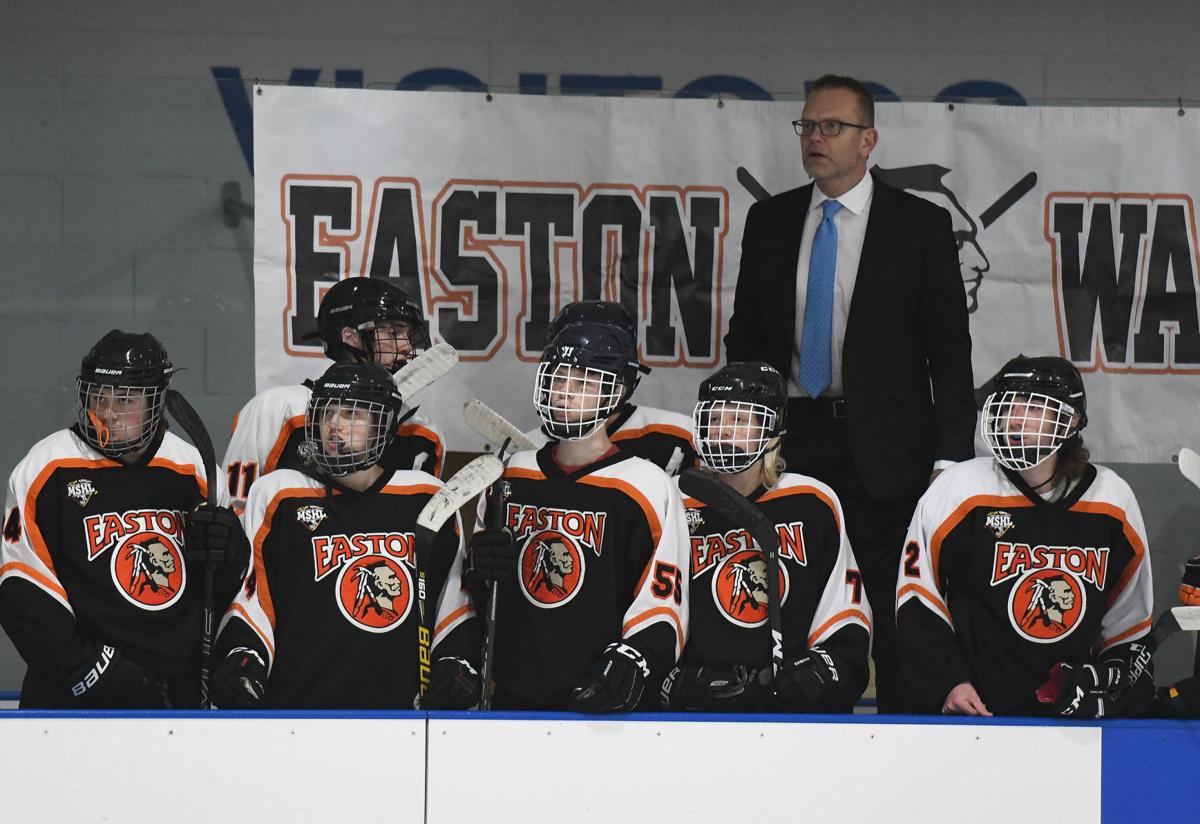 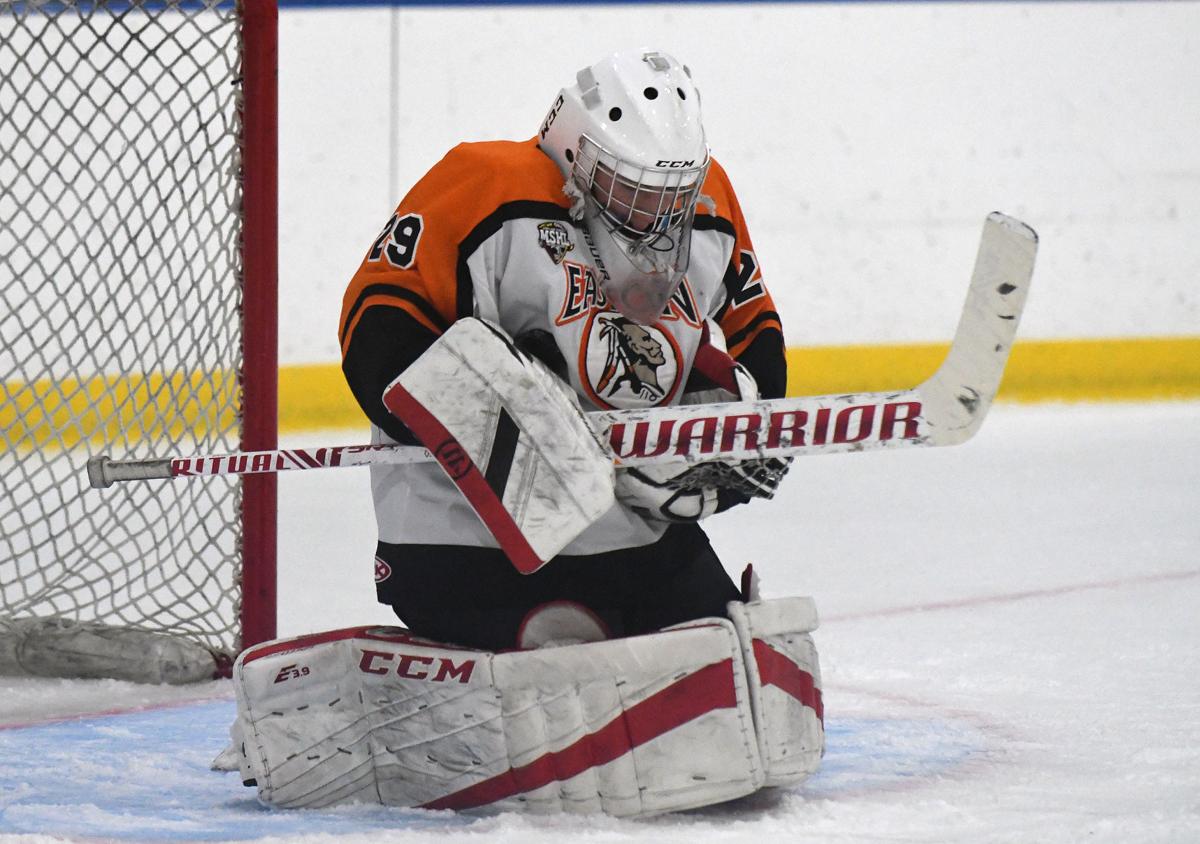 Easton goalie Jackson Short ranked second in goals-against average and save percentage this season in the MSHL.

Easton sophomore Trice Weems (right) was part of a defensive unit that allowed a conference-low 17 goals during the regular season.

Easton goalie Jackson Short ranked second in goals-against average and save percentage this season in the MSHL.

Sophomore Christian Smith had never played hockey prior to this season, and was probably a little nervous as he struggled with his gear prior to one of Easton High’s drop-in practice sessions this past November.

It wasn’t long before Warrior senior captain Brady Barnes moved in to assist his new teammate.

“I understood he was new to the game and he’s a real nice kid,” Barnes said of Smith. “Obviously if you’re new to this sport you kind of feel a little out of place because you’ve never done it before. So I just figured someone just needs to teach him how.”

That gesture was among the little things Easton head coach Tim Nowak remembered most about Barnes, who along with teammates Jackson Short and Trice Weems was selected to this year’s Maryland Student Hockey League all-Eastern Conference first team.

“Most skilled player on the team,” Nowak said of Barnes. “I think what strikes me most about Brady is he’s such a talented player, but he’s a great leader and he’s so humble. Anything for the team.”

Barnes proved that when he helped Smith get squared away with his equipment.

“I put myself in Christian’s spot,” Nowak said. “Like he just felt like he was part of the team, even though he had never played the sport. He didn’t feel like, ‘Oh, I’m an outcast here or whatever.’

“Little things like that,” Nowak continued about Barnes. “He’s an amazing kid because he didn’t just like have his circle of friends. He’s a senior. I don’t know if Christian’s a freshman or a sophomore, but the way he treated him that first day, Christian was hooked. I can’t tell you how many emails his mom sent me, about, ‘He’s having such a good time. I’ve never seen so much confidence.’ And I’m like, it’s all because of Brady really. Just accepting him and making him part of the team. For a kid that never played hockey, I think it’s phenomenal. I don’t think we could have asked for a better leader.”

Barnes was pretty exceptional on the ice as well, as he helped Easton (13-3 overall) to a first-place regular-season finish in the Eastern Conference (11-1) and a spot in the conference final. The senior forward had four assists, led the conference with 28 goals, finished tied for the league-lead in game-winning goals (five), and was tied for second in the league with four power-play goals.

“Humble,” Nowak said of Barnes, who along with teammate Pete Green plans to try out for the club team at Coastal Carolina (S.C.) University. “Just does the right things, really. Doesn’t take any shortcuts. Just so much respect, too, for the game.”

An example of that respect came in a road game against Dulaney.

“He had a chance to hit this kid and all of a sudden the kid was in a vulnerable spot so he stopped,” Nowak said. “And I was like, ‘Oh my gosh, he could have (creamed that kid).’ He just knew he didn’t have to make that hit. I always think of things like that. Those little things.

“I think what impressed me just as much as his on-ice ability was his off-ice leadership,” Nowak continued. “So when one of your best players ability-wise (is) also one of the guys working the hardest in practice, everyone just kind of follows suit behind that; makes it real easy for everyone to buy in.”

While Barnes was making life hard on opposing goalies, Short and Weems were making things difficult for opposing offenses.

“High skill set. Great determination,” Nowak said of Short, his sophomore goalie who in addition to his first-team all-conference selection was a second-team all-league choice. “He’s a type of guy back there that wants to be back there to bail the team out when they get by our team. I think he thrived on that.”

Short finished third in the league for most wins (nine) — two behind Fallston’s Reece Babcock — and his goals-against average (1.22) and save percentage (.937) ranked second in the league only to Gavin Ross of Marriotts Ridge.

“I think he got a little more aggressive, a little more confidence as the season went on,” Nowak said of Short, who finished with three shutouts.

“I think everybody did really,” Nowak said of his team. “As we started winning a little bit more and winning a little bit more, it kind of became that that’s what we expected. They kept working hard and I think they realized their hard work was paying off so they just kept working hard. They liked that feeling of winning and being a part of the team. They just wanted to play hard for each other.”

Perhaps no one played harder that Weems, the sophomore defenseman who raced around the ice as if his hair was on fire.

“He would have stayed out there the whole game if he could,” Nowak said of Weems, who was part of a defensive unit the yielded a conference-low 17 goals during the regular season. “He embraced every challenge. He wanted to be challenged. Every team usually has one or two guys (who are really good). He wanted their best players to come down his side of the ice. I could just see it in his eyes. He wanted to be challenged, like ‘Come on down my side and try to beat me.’

“Nothing really fazed him,” Nowak added. “He was able to just block out external factors. ‘OK, we got a game tonight. I’m going to do whatever I can.’ He didn’t have all these phenomenal stats. But his ability to possess the puck, just to control things like that ... phenomenal. And it seems like the game slows down for him. It seems like the way he sees the vision of the game, it slows it down. For a sophomore to have that is unbelievable.”

A former NHL official who ended his 26-year career in the National Hockey League last April, Nowak was named the Eastern Conference’s Coach of the Year.