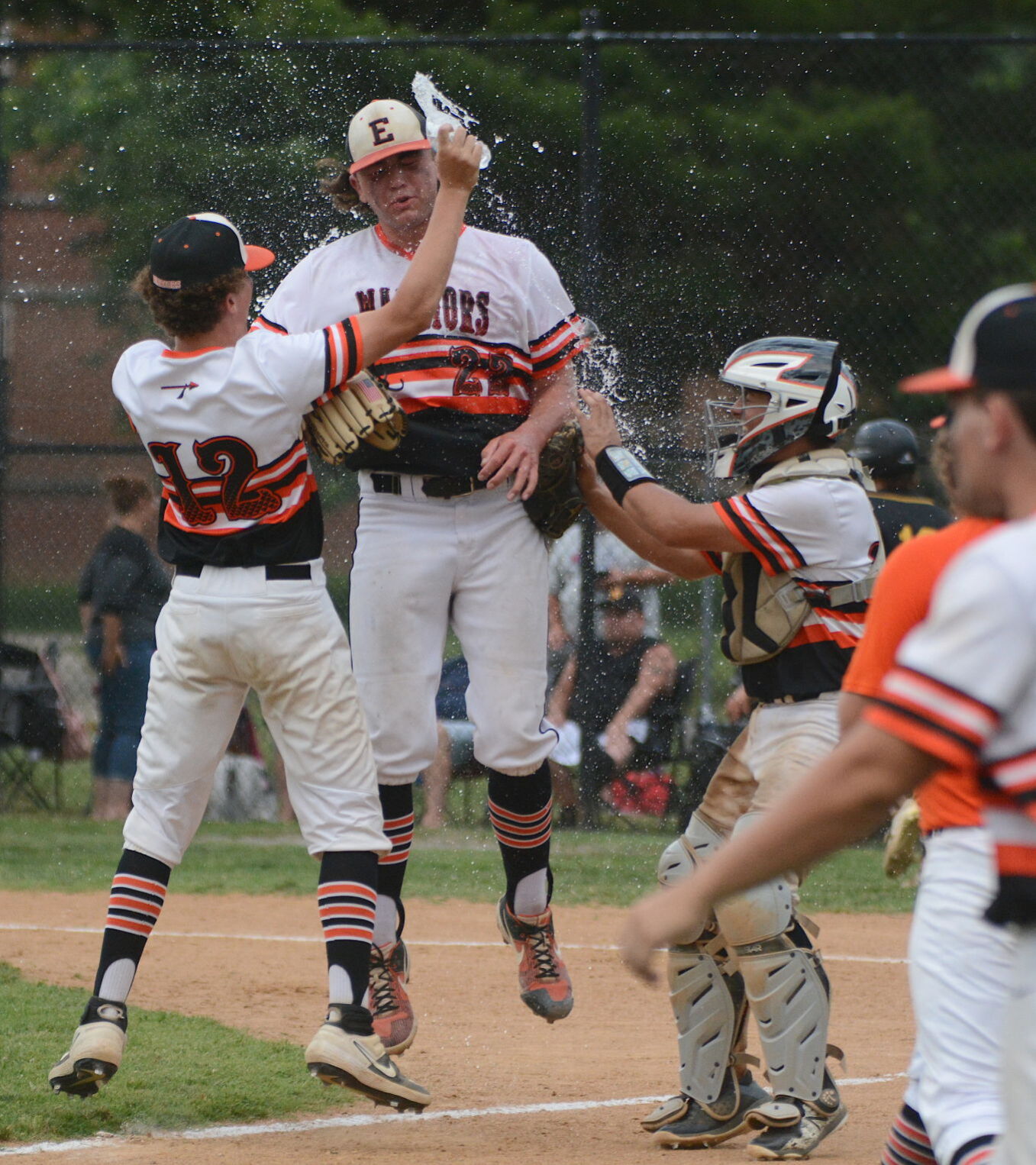 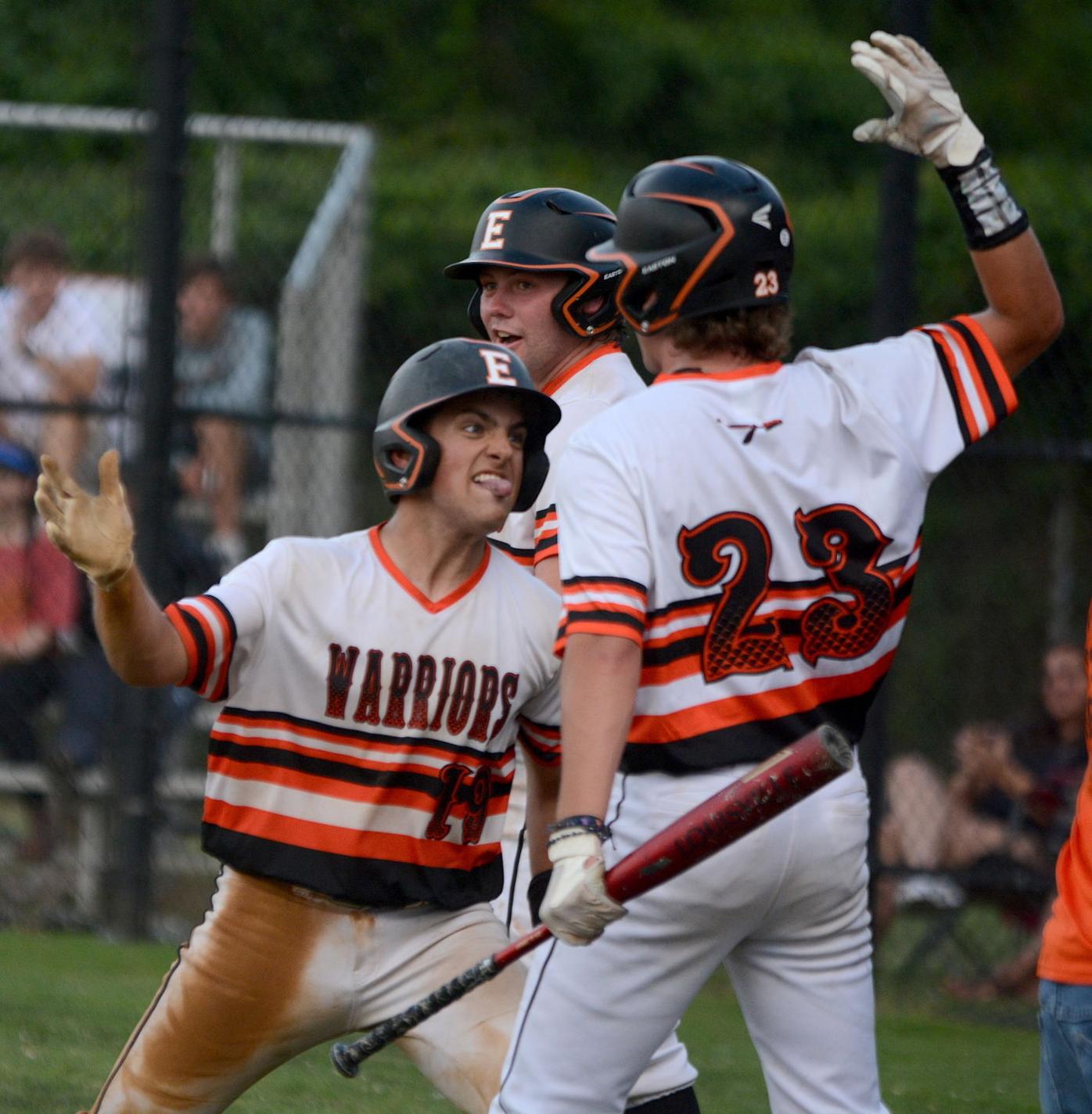 EASTON — Easton High head baseball coach Albert Pritchett knows he may sound like a broken record, but he doesn’t get tired of saying it.

“Our kids really believe it’s never over,” Pritchett said. “Give them one more at-bat and they believe they’ll hit their way out of it. That’s their belief and that’s why we love ‘em.”

Pritchett was loving what he saw from the bottom half of his lineup Tuesday, as it fueled a four-run, sixth-inning rally before Max Vener escaped a bases-loaded jam in the top of the seventh that sealed Easton’s 5-4 victory over Northeast of Anne Arundel in a Class 3A South Region II quarterfinal.

The third-seeded Warriors (7-2) are scheduled to play at No. 2 Chesapeake (Anne Arundel) Wednesday at 4 p.m. in a region semifinal.

“We’ve been in this situation before,” said Pritchett, whose team had mustered just one hit through four innings and trailed 4-0 entering the bottom of the fifth. “The kids never give up. I know that gets old sometimes saying that, but it’s really true about this group.”

Eagles starting pitcher Mason Dickey retired the first 11 batters he faced before Ryan O’Connor lined a clean, two-out single through the left side of the infield in the fourth.

“We were completely fooled by the first pitcher, who did a great job,” Pritchett said of Dickey.

But No. 5 hitter Colin Baynard (2 for 3) opened the home fifth by lining a single to center. Dickey got a called third strike on Vener before Isaac Dressler (2 for 3, RBI) singled to center. Tristan Cassell singled to right. Northeast’s right fielder threw to second, where Dressler was called out, though the Eagles’ second baseman appeared to drop the ball, bringing Pritchett onto the field for an explanation. The called stood. No. 9 hitter Chris Baynard then singled to center, scoring his older brother Colin, cutting Easton’s deficit to 4-1. Dickey got Jarin Winters to ground out to short to end the inning.

Vener came on in relief of Jackson Cronan in the top of the sixth. After Nate Wilburn reached on a chopper that O’Connor couldn’t pick at short, Vener got Aden Stankiewicz to bounce into a 5-4-3 double play. Dickey walked before Vener got Josh Arnold to ground out to Colin Baynard at first to end the inning.

Tyler Doyle relieved Dickey in the bottom of the sixth and yielded a leadoff single to Cronan before retiring O’Connor and Carson Brown. Colin Baynard hit a hot shot that took a bad hop on Eagles shortstop Will Ward. Cronan and Colin Baynard advanced a base on a wild pitch. Vener followed by crushing a double over center fielder Wilburn’s head, scoring Cronan and Colin Baynard to pull Easton within 4-3. Dressler then launched another double over Wilburn’s head to plate Vener with the tying run.

“All we really needed to do was stay back and try to drive it the other way,” Dressler said of the Warriors’ early struggles at the plate. “I think our problem was we were seeing the first thing and swinging at it. We were trying to swing out of our shoes. You really got to work the count and get your approach.

“I’ve been struggling pretty much the entire season; I’ve been pulling my head out front,” Dressler said. “So this was one of those at-bats that I got to kind of test my new skills; staying back, just watching the ball come in, staying really focused, seeing that that was my pitch and really driving it.”

Doyle walked Cassell. Chris Baynard then grounded to short, where Ward double-clutched before making a low throw that first baseman Stankiewicz couldn’t dig out, allowing Dressler to race home with the go-ahead run.

“Two outs, we’re tied and we needed the run,” Dressler said. “Two outs, we’re (running) on contact. Took a peek over, that kid double-clutched, that ball went into the dirt and I knew I was off to home.”

But the Eagles weren’t quite finished.

Vener got Mason Kanipe and Sean Fluhr to ground out to open the top of the seventh. The senior left-hander then walked Paul Moger, watched pinch-hitter Chase Lovelace reach on an error, before walking Ryan Hatch to load the bases. But the sacks remained loaded, as Vener got Wilburn to hit a deep fly ball to Chris Baynard in left field to end the game.

Northeast (2-11) broke a scoreless tie in the fourth. With the bases loaded and no outs, Easton starting pitcher Winters fielded a bunt from Moger, but threw wide of home plate, allowing Josh Arnold to score. Dressler retrieved the ball and threw home in hopes of getting Kanipe, but Winters couldn’t come up with the ball.

The Eagles extended their lead to 4-0 in the fifth, when Kanipe scored Dom Hunt on a sacrifice fly before Moger singled past a lunging O’Connor at short to score pinch-runner Jeremy Brousseau.

But the Warriors rallied, as their No. 5 through 9 hitters — Colin Baynard, Vener, Dressler, Cassell and Chris Baynard — accounted for seven of the team’s nine hits and drove in four runs.

“Five through nine in the lineup really took over and carried us from innings five on,” Pritchett said. “And really those guys deserve a lot of credit. Those guys really came through.”

RIDGELY — Chris Curler went 4 for 4 with a pair of doubles, a triple, a home run and six RBIs Monday, as the Bulldogs won in six innings to advance to Wednesday’s semifinal round at top-seeded Parkside.

Left-hander Kyle Speas earned the win for the Bulldogs, allowing six hits, walking one and striking out five over three innings of relief.

Jayden Watkins and Trent Towers each went 2 for 3, and Jamaree Roberts singled and doubled for North Caroline.