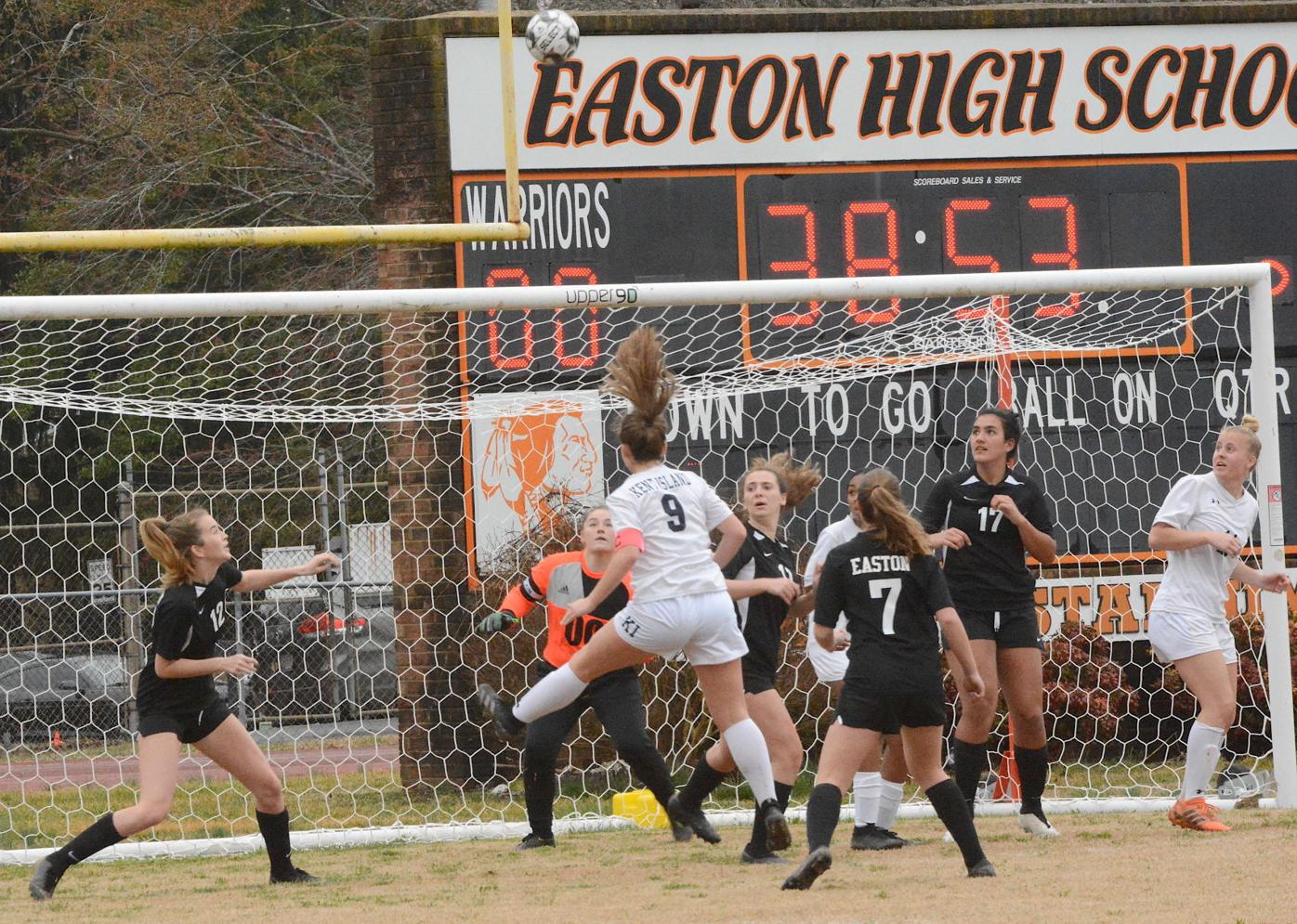 Kent Island’s Caroline Plank (9) sends a header over the crossbar for almost everyone to see during the second minute of Thursday’s second half against Easton. 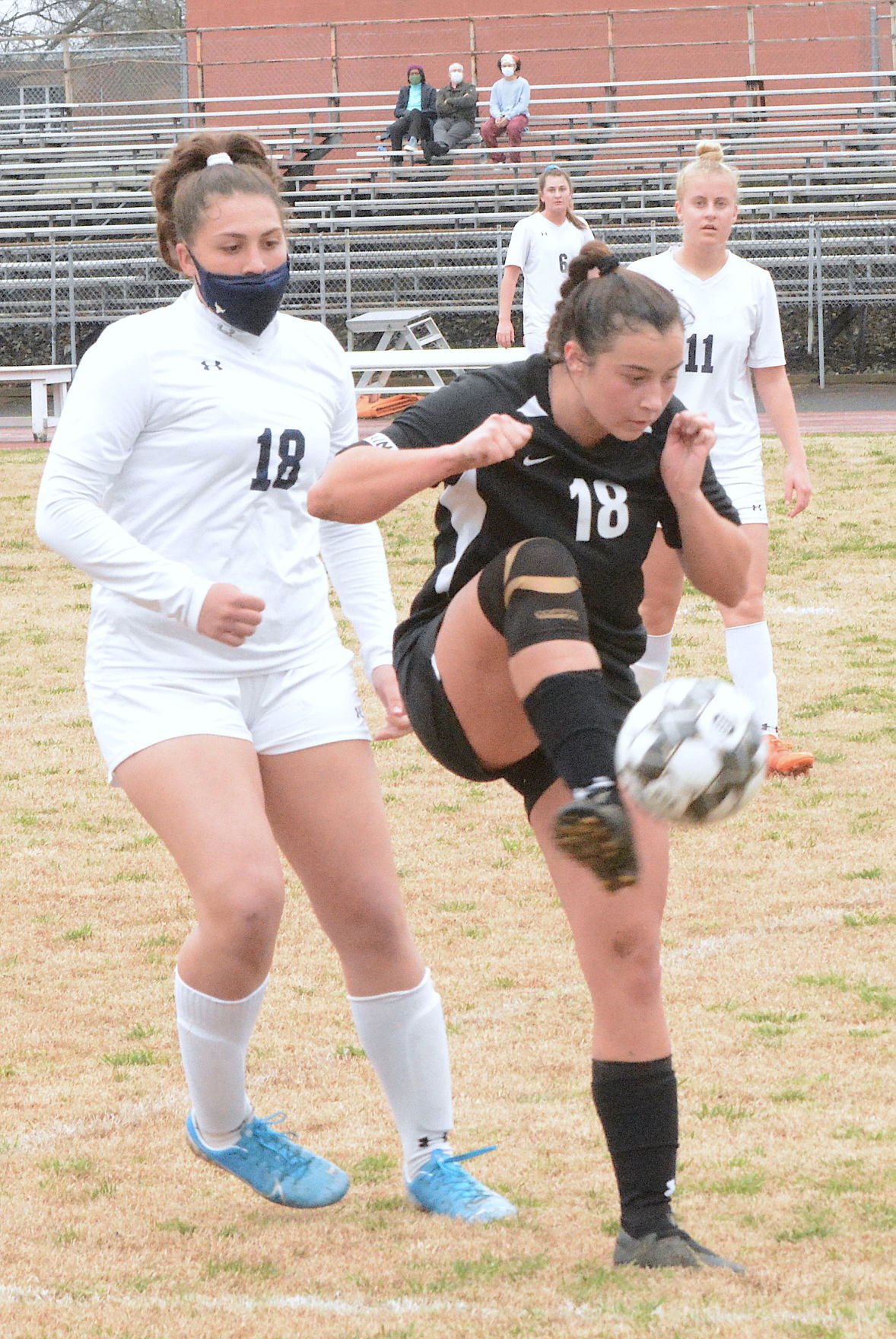 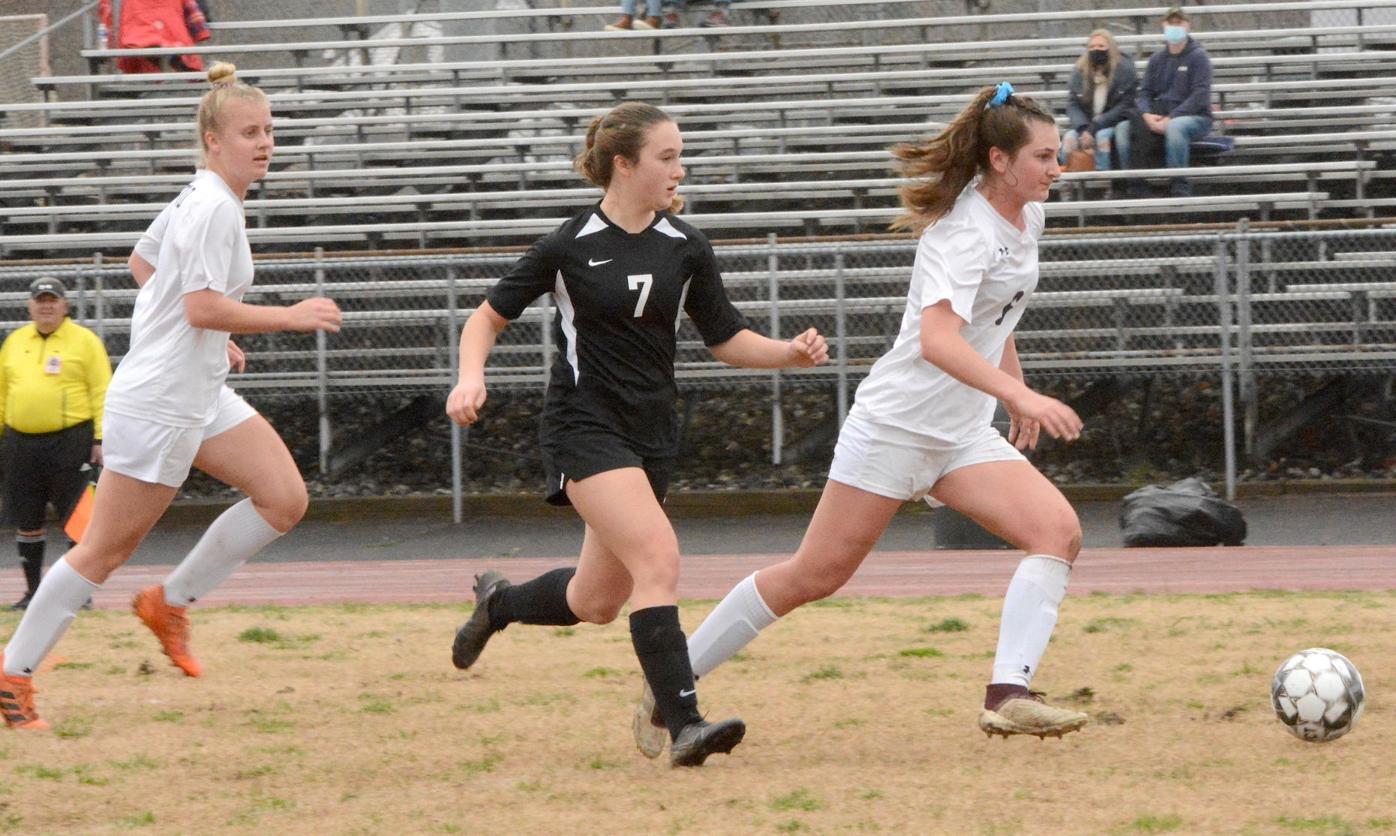 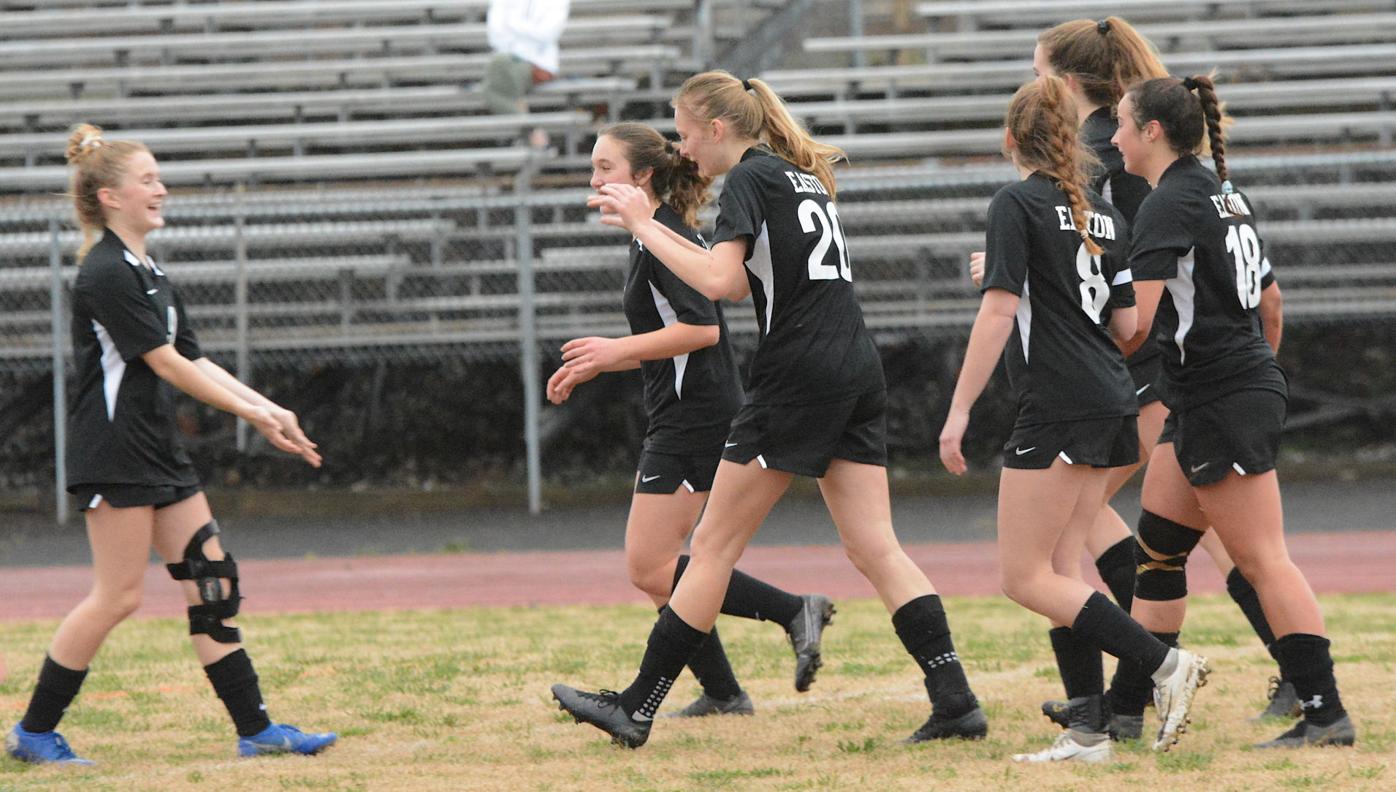 Easton's Julia Hammons (20) is congratulated by teammates after her game-tying goal in the second half Thursday against Kent Island. 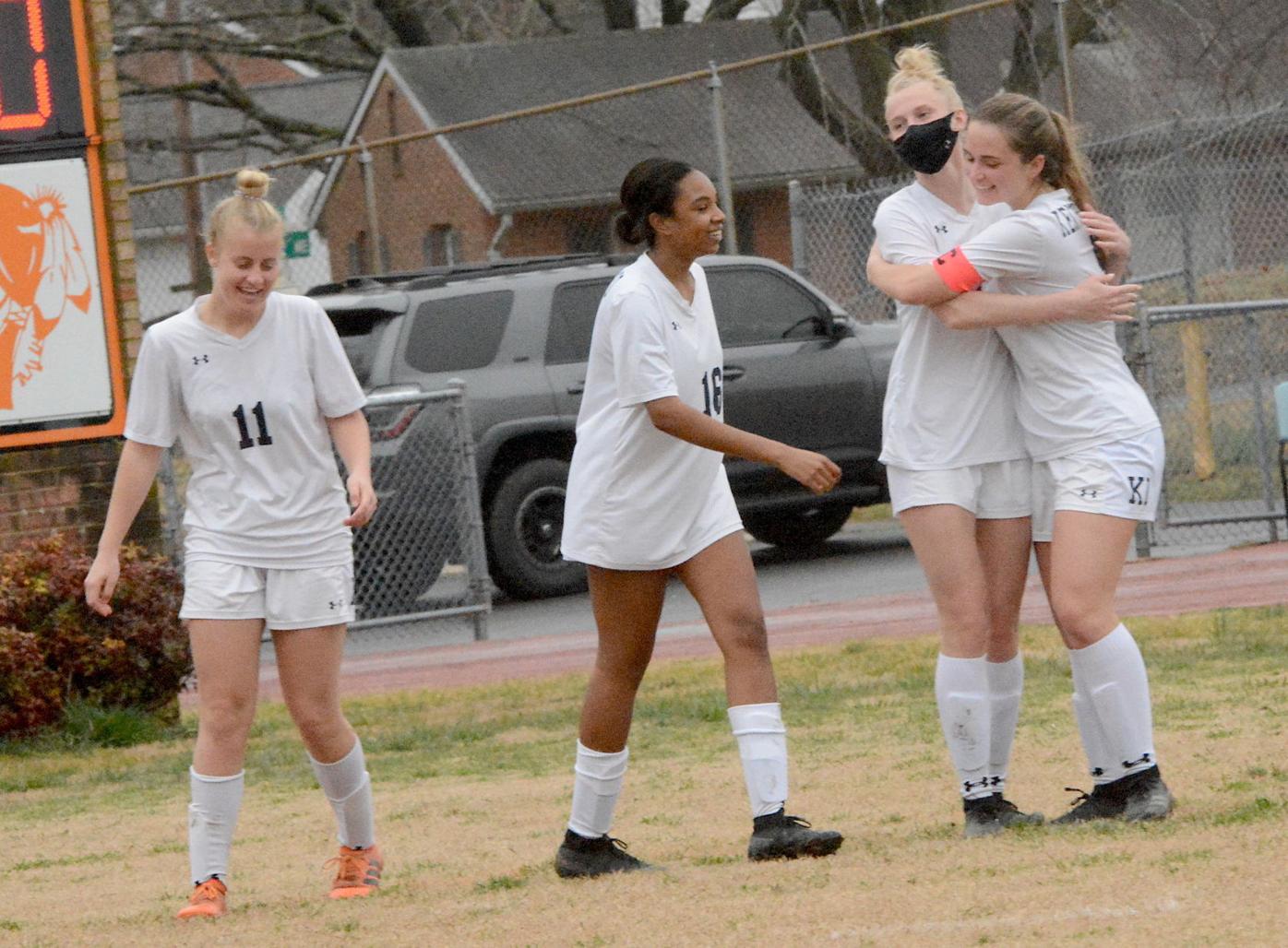 Kent Island’s Claire Schultz (mask) is congratulated by teammates Thursday after her goal gave the Buccaneers a 1-0 lead on Easton. 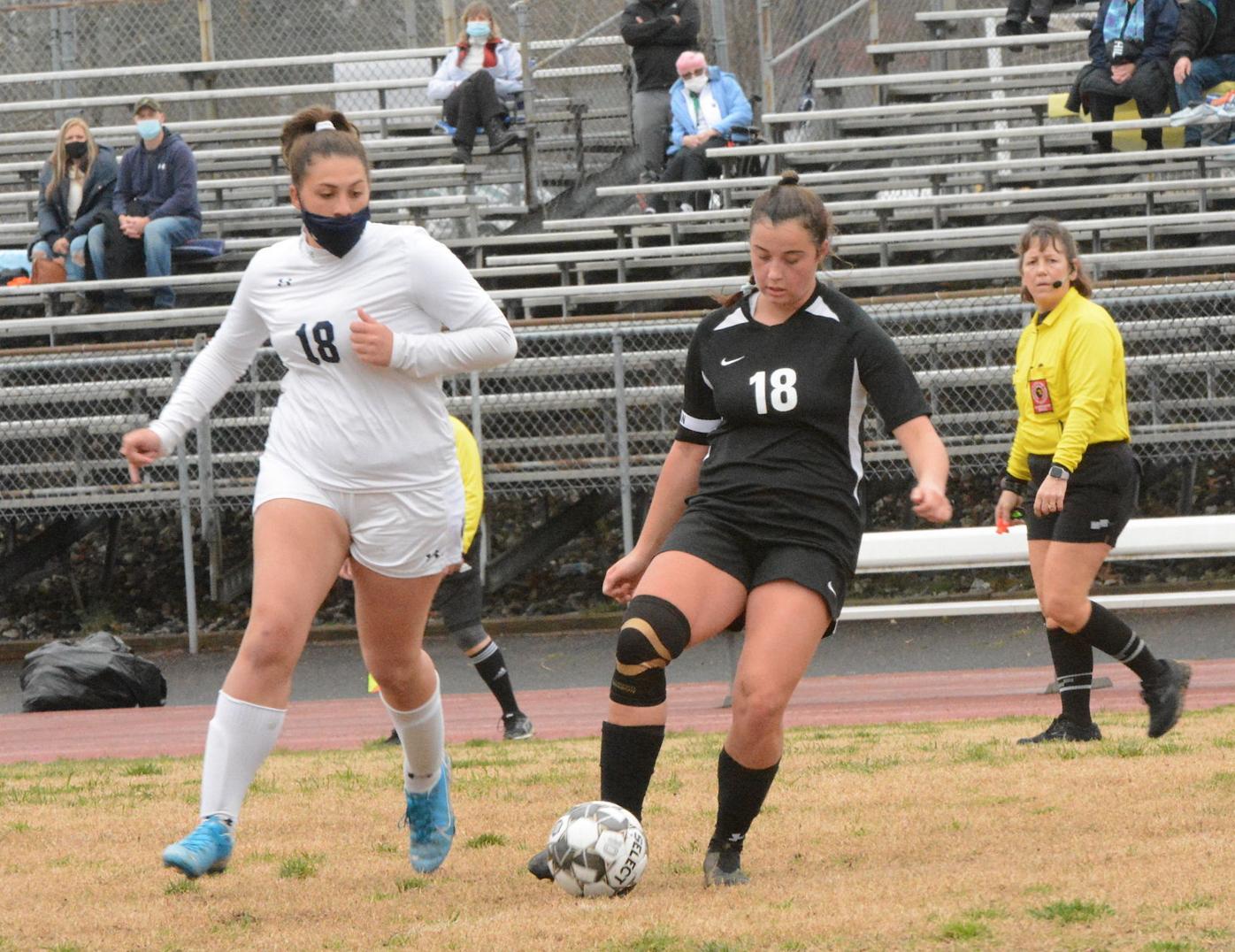 Kent Island’s Caroline Plank (9) sends a header over the crossbar for almost everyone to see during the second minute of Thursday’s second half against Easton.

Easton's Julia Hammons (20) is congratulated by teammates after her game-tying goal in the second half Thursday against Kent Island.

Kent Island’s Claire Schultz (mask) is congratulated by teammates Thursday after her goal gave the Buccaneers a 1-0 lead on Easton.

EASTON — Elle Pennington isn’t sure how far her voice carries.

But trailing by a goal in the second half of Thursday’s game with Kent Island, Easton High’s girls’ head soccer coach turned to her bench and said, “We’ve got to score a goal.”

Not long after Pennington’s commentary, Lily Osborne set up Julia Hammons for a tying goal that proved to be the game’s final play, as a lightning flash immediately after the score brought an abrupt conclusion to a 1-1 draw.

“Maybe like perfect timing,” Pennington said of Hammons’ tying goal. “You could tell it was starting to get dark. I had made a comment that we had to get one in the back of the net here soon. I don’t know if the girls on the field heard me say that or not, but they definitely did that.”

Nine days after the Buccaneers edged the Warriors 5-4 in overtime on a penalty kick, the two sides played a scoreless first half. Easton’s best scoring chance of the half came in the 13th minute when Hammons directed a hard shot on goal that was stopped by Kent Island’s Alyssa Dabolish, who played keeper the first half. The Bucs had three corner-kick opportunities within a 2-minute span midway through the half, but couldn’t convert.

Both teams generated more offense in the second half, starting with Kent Island (2-1-1) as Caroline Plank sent a header over the crossbar in the second minute. Less than three minutes later, Easton keeper Jessica Millard made a nice initial sliding save on a shot, but watched the rebound roll away to Kent Island’s Claire Schultz, who placed the into the net for a 1-0 lead 4:09 into the second half.

“I just told them if we keep doing like we’re doing in practices the goal will come,” said Nascimento, who said his team was nervous because it arrived just before the scheduled 4 p.m. start time. “They calmed down a little bit. So they relaxed a little bit and I said, ‘Do what we do in the practices and the score will come.’”

The Warriors (0-2-1), who in addition to the 5-4 loss to Kent Island, lost 2-1 to Queen Anne’s on Tuesday, continued to trail by one as thunder started rumbling over Warrior Stadium over the ensuing 10 minutes.

Then Osborne, the three-sport standout headed to Loyola University for lacrosse, gained possession and made a run toward goal. Megan Mollman, the Bucs’ second-half goalie, moved off her line in a bid to cut down Osborne’s angle, only to have the Easton senior cross the ball to her right, where Hammons drove it into the right side of the net for her fifth goal of the season and a 1-1 tie with 25 minutes remaining.

“Lily and Julia worked great together on that play,” Pennington said. “At halftime we kind of talked about making sure our heads were back in the game. The girls talked about putting pressure on Kent Island, and making sure when we got possession of the ball we were creating opportunities to score. I think that was a good example of them putting that to work today.”

Lightning then flashed over the stadium before players returned to midfield for the restart, ending play, and eventually the game.

Though there will be no regional or state playoffs this season, Pennington has already seen a difference in an Easton team that lost 5-1 Kent Island and 4-1 to Queen Anne’s in 2019.

“I think our senior group this year is making a whole world of difference,” Pennington said. “We have 12 seniors this year and they are all leaders in different ways. So I really think that has propelled them forward and it really shows at practice and in games.”

STEVENSVILLE — Emma DePhilippo had seven kills and six aces, and Madison Tinsley finished with 15 assists and four aces, as the Buccaneers improved to 4-0 with a 25-12, 25-14, 25-17 victory of the Trojans on senior night.