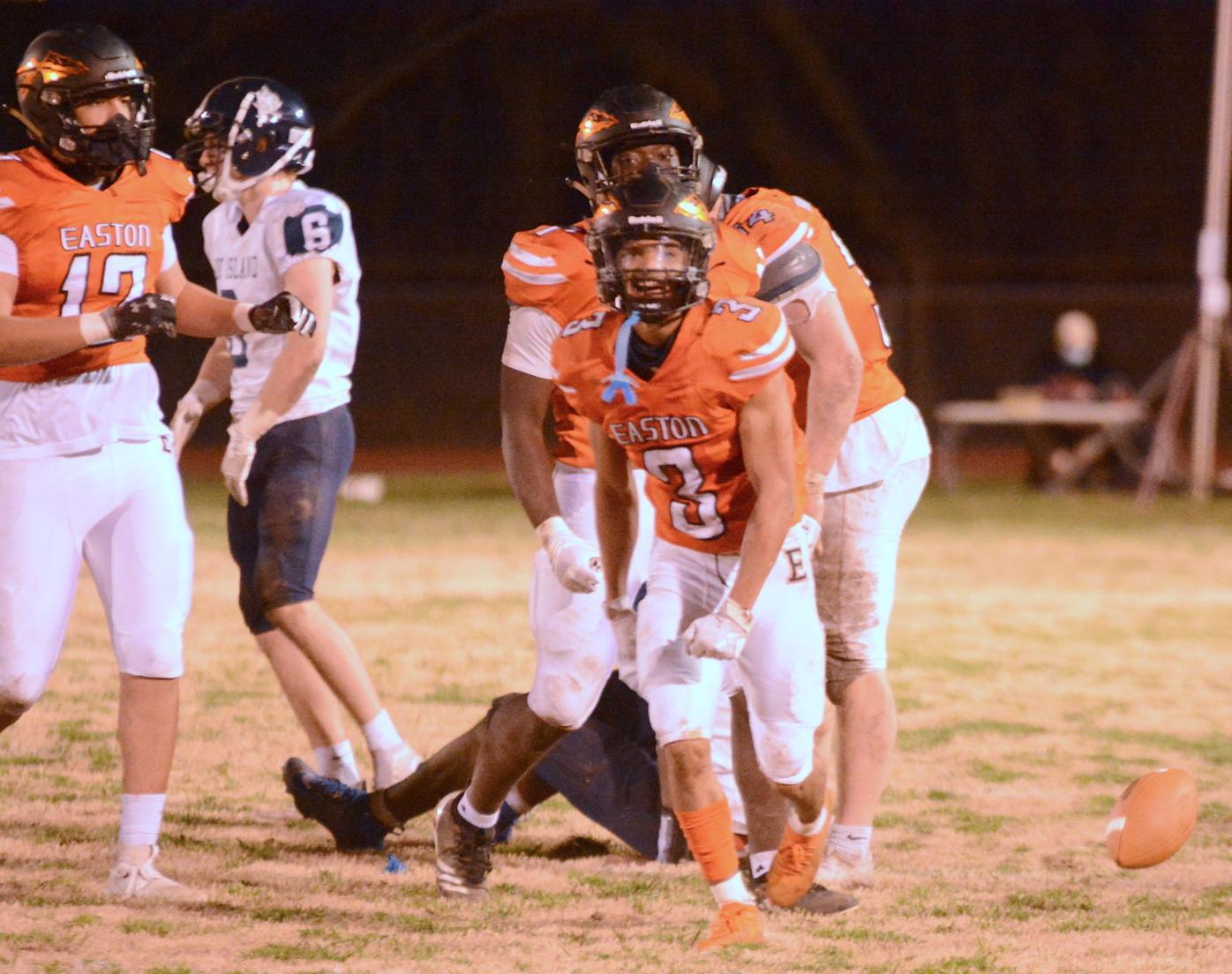 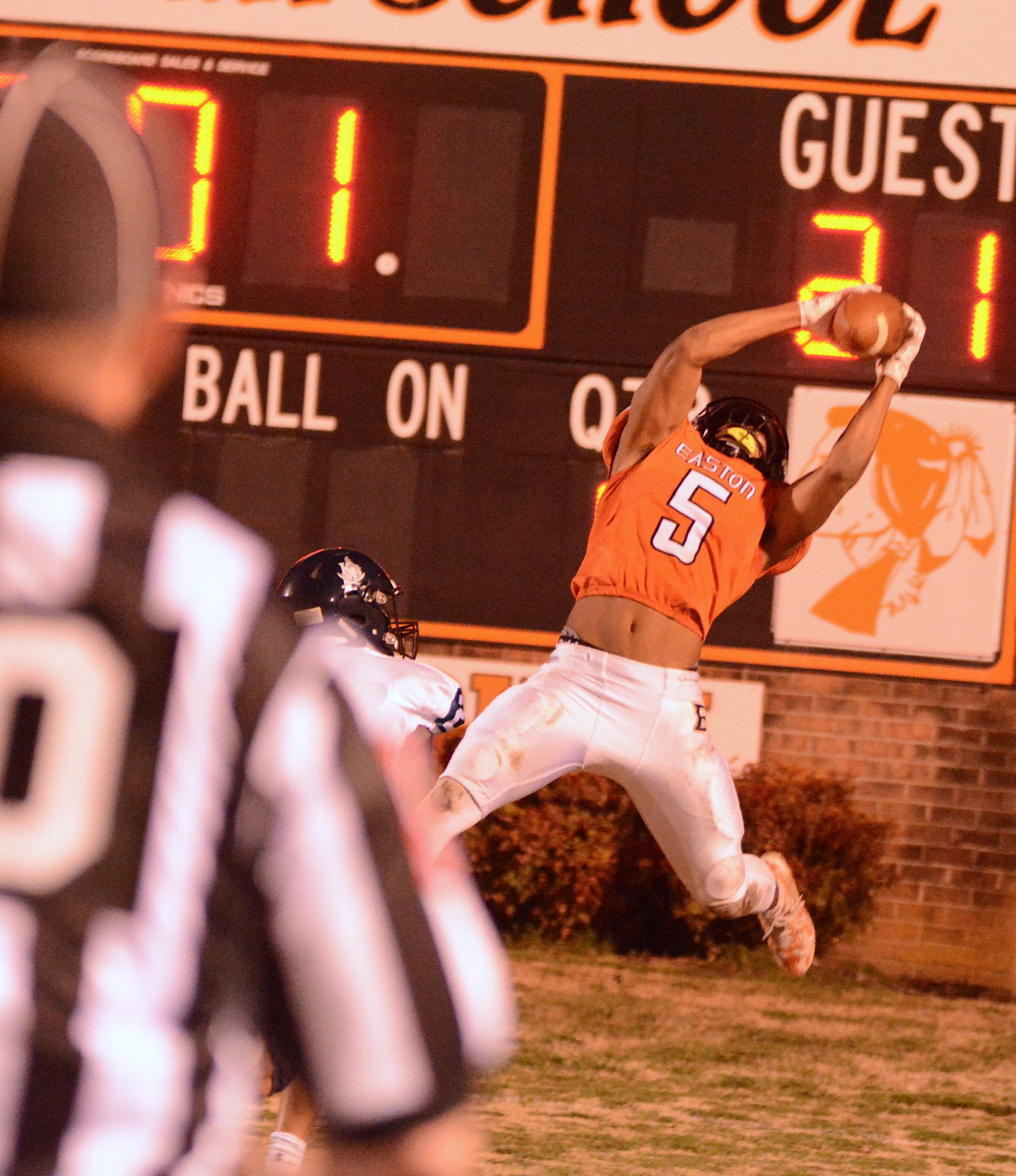 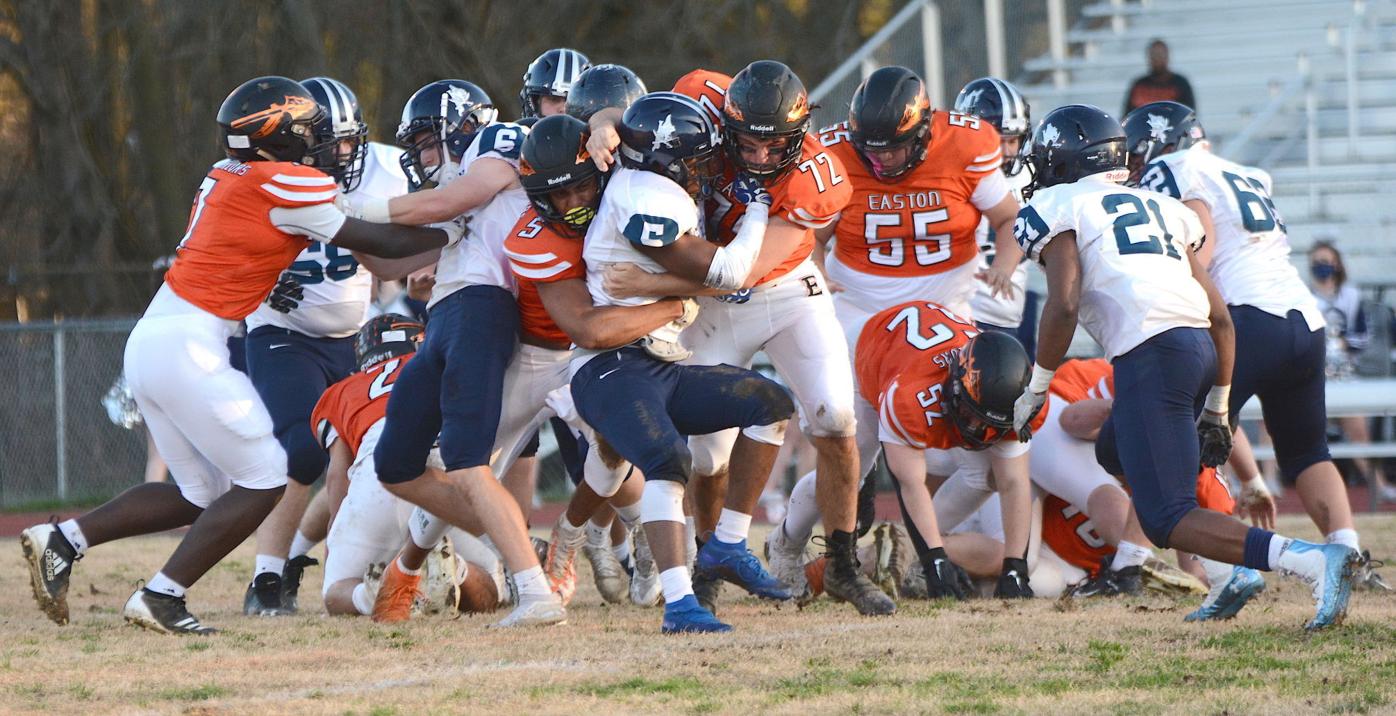 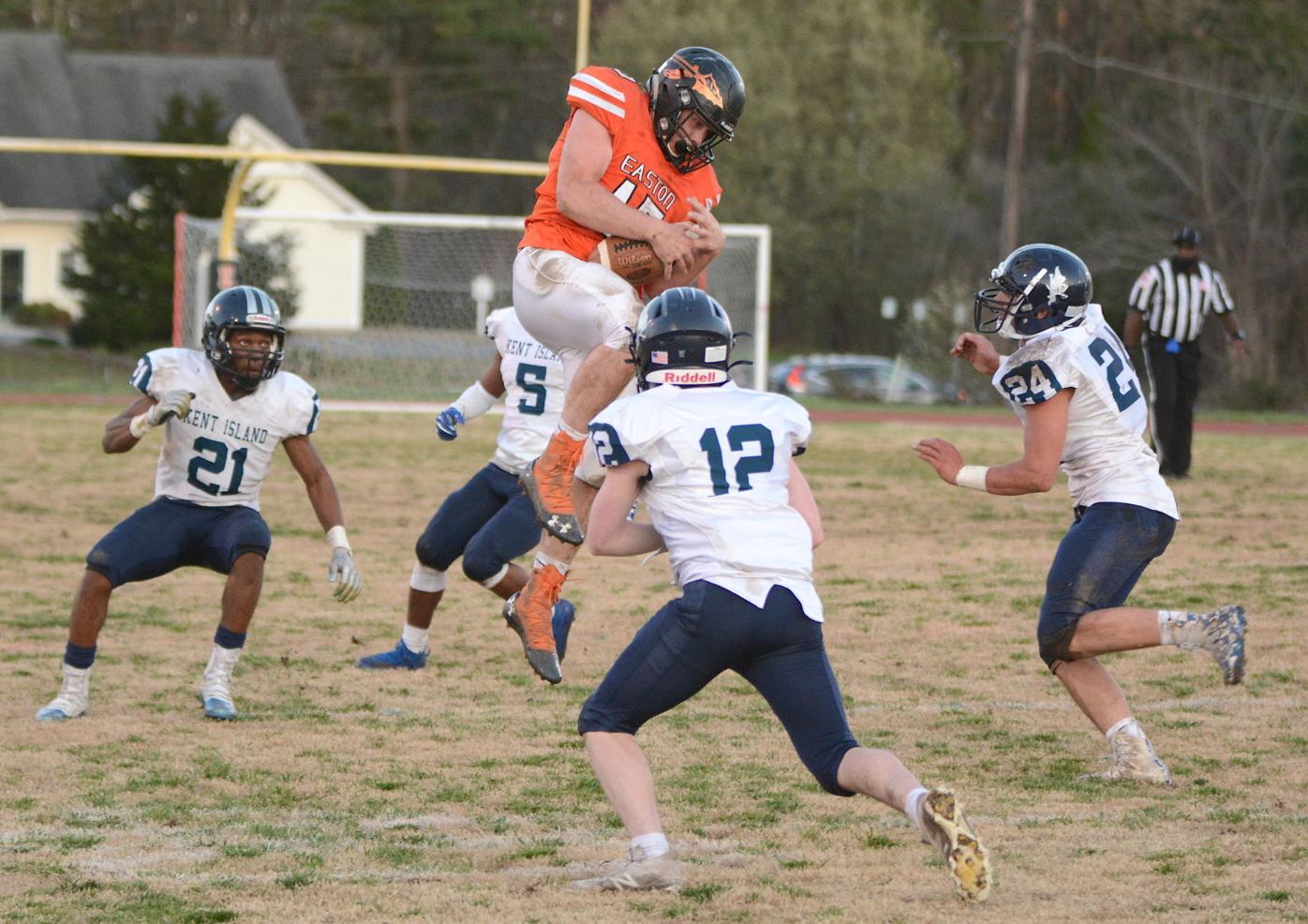 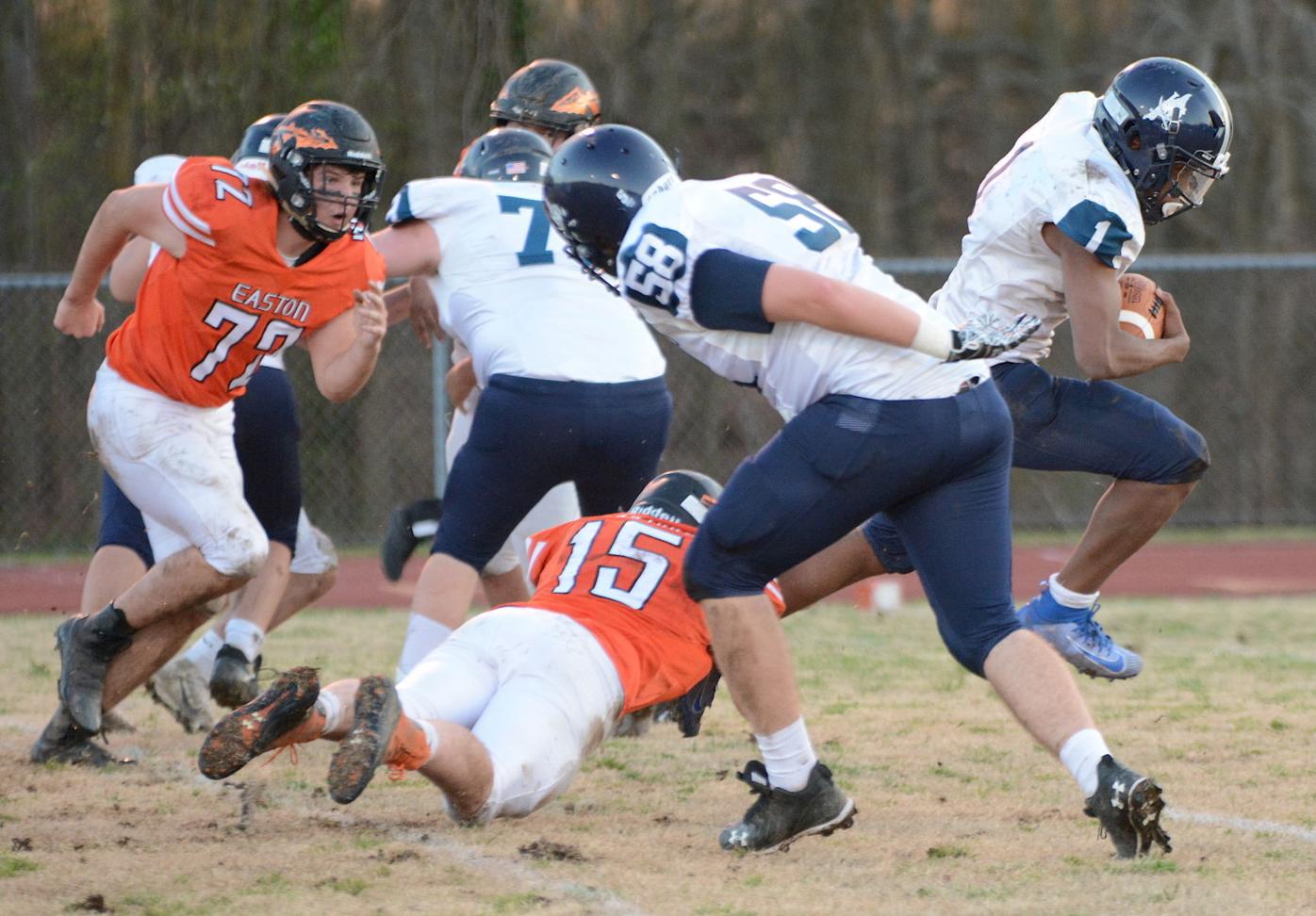 Kent Island quarterback KJ McGowan (1) breaks into the clear during Friday’s first half against Easton. 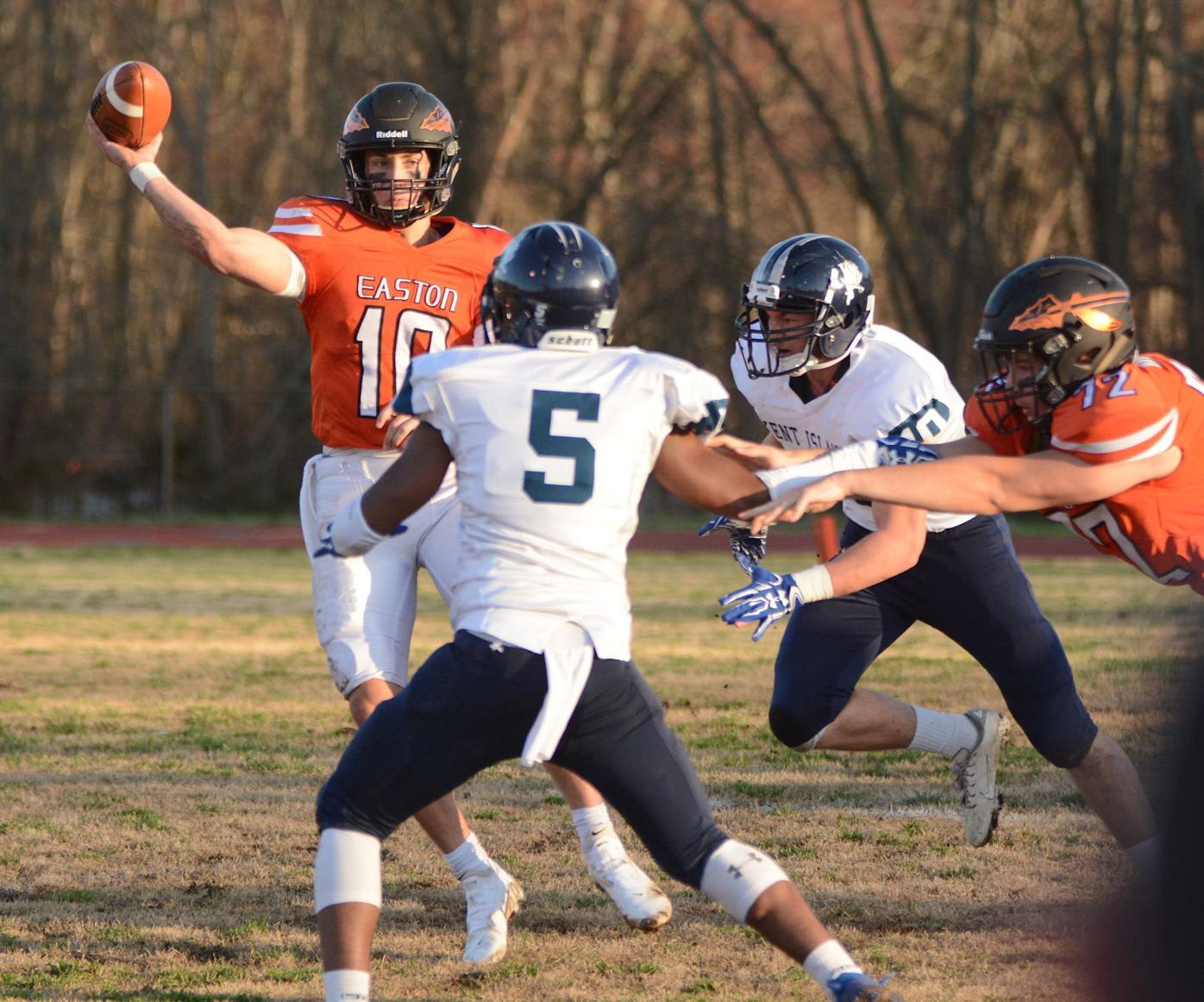 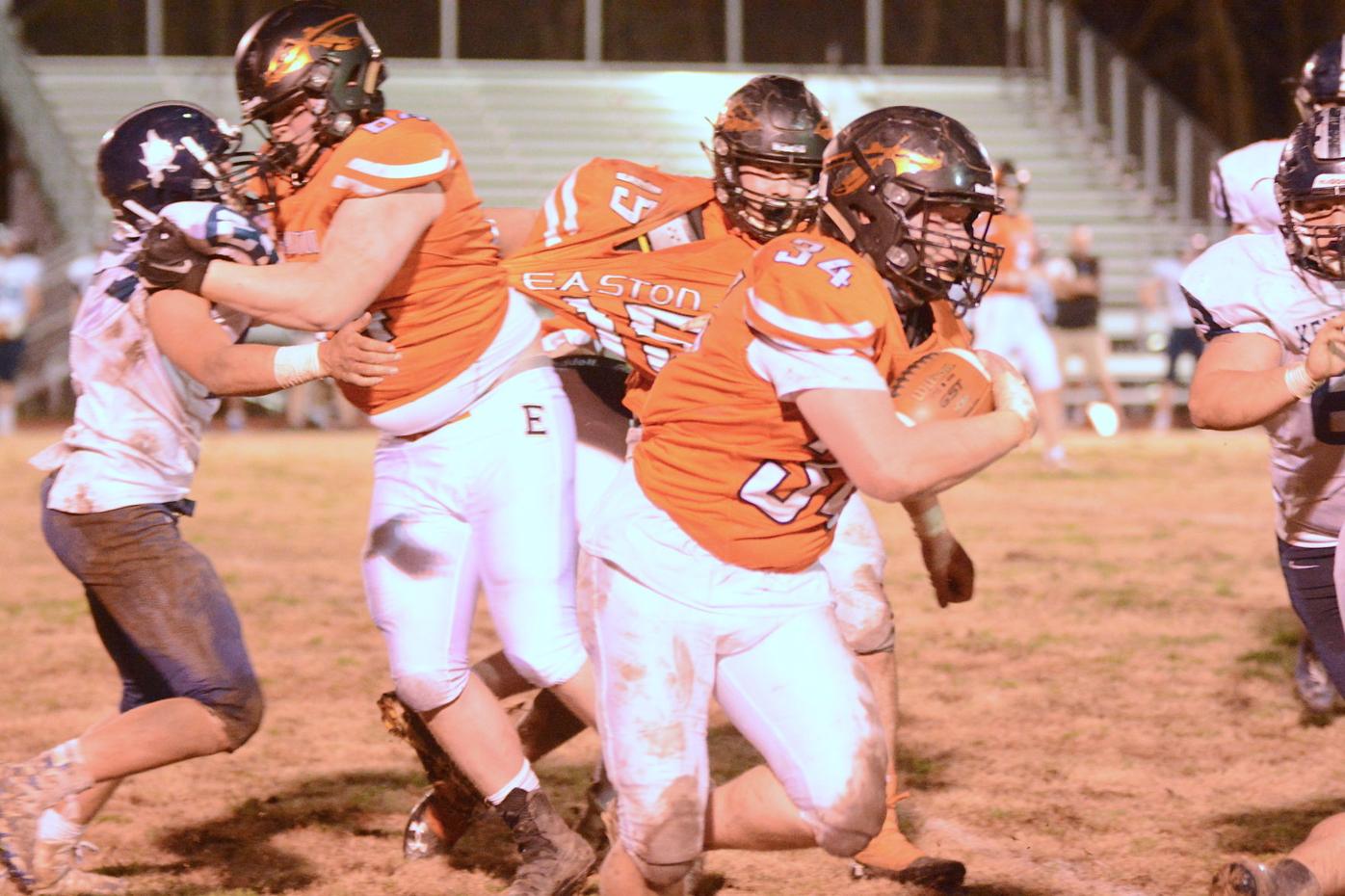 Kent Island quarterback KJ McGowan (1) breaks into the clear during Friday’s first half against Easton.

EASTON — He may be 5-foot-6, 135 pounds, but Deagon Chester always thought he could make big plays for Easton High’s football team.

If he could only get a chance and stay healthy.

Chester was brought up to varsity his sophomore year, but got limited playing time. He then lost his entire junior year when he suffered a preseason injury.

The senior hasn’t missed a game this season, and Friday night made the biggest play of his career, when he strip sacked Kent Island quarterback KJ McGowan on the game’s second-to-last play and recovered the fumble to seal a 26-21 Warriors victory over the Buccaneers.

“Deagon really came up huge this week for us,” Easton head coach Pat McGlinchey said. “We knew he was going to be starting on defense for us this week. He made big plays all night with some punt returns and also playing cornerback. And then for him to make that play at the end … I’m really happy that he made a huge play at the end of the game.”

McGlinchey was real nervous though over the game’s final five minutes and a second straight cardiac-like finish.

Leading 21-20, Kent Island (1-2) was in position to hand Easton (3-0) its first loss of the season, when Briar Kuebel intercepted Warrior quarterback Ryan O’Connor with just over 5 minutes remaining. Starting from their 15-yard line, the Buccaneers moved 15 yards and gobbled up two minutes of clock with three consecutive running plays. But on second-and-seven, the snap from center went through McGowan’s hands and was recovered by Easton’s Jonathan Pope at the Kent Island 21.

“Absolutely. I thought we had the opportunity to win the game,” Kent Island head coach Damian Ferragamo said. “We had the ball with something like under four minutes. But we had to put together some first downs and we had a miscue. We had a lot of self-imposed mistakes today.”

On the next play, O’Connor threw a 21-yard touchdown pass that senior Grant Copper made a pretty leaping grab on for a 26-21 Warriors lead with 3 minutes remaining. Having missed the previous point-after kick, Easton went for two, but O’Connor was sacked.

A nice kickoff return gave Kent Island the ball on its 44. McGowan, who completed 9 of 16 for 104 yards and a touchdown in his second game filling in for Matt Burnside, hit Delvin Johnson for a 13-yard pickup to the Warriors 43. Easton stuffed two straight run plays for no gains. McGowan hit Delvin Johnson for four yards. The Bucs then tried a hook and ladder on fourth down. Chrisjun Prado caught’s McGowan’s pass in the left flat, and quickly lateraled to Delvin Johnson, who was stopped a yard short of the first down.

Easton took over at its 34 with 1:04 remaining. Kent Island burned two timeouts after two straight Zac Bramble runs, which set up a third-and-one. The Bucs again called time after dropping Jarin Winters for a 1-yard loss. The Warriors decided to go for it on fourth-and-two, but a false start penalty brought on the punt team.

Kent Island took possession on its 45 with 37.9 seconds remaining, but lost 10 yards on first down when Kevin O’Connor sacked McGowan. After an incompletion on second down, McGowan threw a pass that Mason Brockington had two hands on before Copper jarred the ball loose with a devastating hit in front of the Easton sideline, setting up an apparent fourth down.

But officials ruled Copper hit Brockington in the head, called a 15-yard penalty on the play and ejected the senior defensive back. Brockington, who was on the ground for about four minutes after the hit, was checked by Easton’s trainer and walked to the Kent Island sideline under his own power.

With the ball on the Warriors 45, McGowan rolled left on the next play and began searching downfield when Chester sprinted toward him, knocked the ball from his right hand and recovered at the 40-yard line.

“I thought he was going to pass it at first,” Chester said of McGowan. “And then I’d seen him rolling out and I wasn’t really sure if I should stay back or if I should go try make the tackle. My gut decision was go make the tackle, and when I went for the tackle the ball came out, I’d seen it, and grabbed it.

“It feels really good actually considering that I came from not starting these past few weeks,” Chester continued. “It felt good to be able say that I did something to contribute to the win.”

One week after scoring a touchdown and two-point conversion with 47 seconds remaining for a 15-14 victory over North Caroline, Easton was engaged in yet another tug-of-war.

The Warriors took a 7-0 lead with 4:08 left in the first quarter, when Ryan O’Connor (18 of 32 for 217 yards, four touchdowns, two interceptions) rolled right and threw across his body to Copper (six receptions, 64 yards) for a 14-yard touchdown play — the first of three scoring connections between the two seniors. Tristan Cassell tacked on the extra point.

McGowan’s 5-yard touchdown run up the middle capped a 13-play, 60-yard Bucs’ scoring drive with 8:39 left in the second quarter. James Gardner drilled the first of his three point-after kicks to forge a 7-all tie.

Easton’s ensuing drive ended with punter Jackson Cronan getting dropped for a 10-yard loss after a high snap from center, giving Kent Island possession on the Warriors 20. Two plays later, McGowan connected with Prado for a 22-yard touchdown pass, with Gardner’s PAT giving the Bucs a 14-7 lead with 6:51 left in the half.

The Warriors drove from their 29 to the Kent Island 44, where on first down Ryan O’Connor’s pass went off Winters’ hands into the clutches of Bucs defensive back Ke’Juan Johnson for an interception.

Easton got the ball back with 2:38 left in the half and watched O’Connor engineer an 85-yard scoring drive that included a 26-yard gain to Nate Book and a pass interference penalty. That set up a 21-yard touchdown pass from O’Connor to John Carrieri, who for a second straight week made a diving scoring catch. Cassell’s extra-point kick tied the game at 14 with 46.6 seconds left in the half.

“We were able to hold the ball,” Ferragamo said of his ball-control offense. “We were able to convert on some big fourth downs too in the passing game to extend some drives and get some scores. And that’s important to keep number 10 (Ryan O’Connor) off the field over there. That’s really important because, gosh, the kid makes so many plays with feet. His feet first and then his arm second.

“It’s nuts,” Ferragamo continued of O’Connor. “He’s playing seven-on-seven out here because he just slides around the pocket and pressure doesn’t get to him. And he’s got an army of talented receivers. They just keep coming. It doesn’t matter who’s playing and who’s not playing.”

The Warriors moved back in front with just over 7 minutes remaining in the third quarter, when on third-and-goal, O’Connor fired to Copper, who made sure he had both feet inbounds for a 5-yard touchdown reception and a 20-14 lead.

Kent Island chewed up the final 7 minutes of the third quarter, fumbled the ball away 52 seconds into the fourth quarter, but regained possession after forcing a three-and-out. Just 1:27 later, Ke’Juan Johnson rook a handoff up the middle and spun out of a tackle en route to a 14-yard touchdown run. Gardner’s PAT gave the Bucs a 21-20 lead with 7:23 left in the game, setting up the ensuing wild ending.

“I don’t like living on the edge,” McGlinchey said. “I really wish we wouldn’t live on the edge. For us, this week. We were really sloppy. A lot of penalties. And that’s not really what we’ve been like this year. Had some breakdowns on special teams and Kent Island really played a great game.

“Their game plan was working,” McGlinchey continued. “They were controlling the clock and we just came up with some really big turnovers on those long drives that they had and they just couldn’t finish off a couple of them. If there wasn’t a bad snap in there, who knows how it would have ended.”

CENTREVILLE — SyRus McGowan had a touchdown run of over 60 yards and threw a touchdown pass to Jordan Johnston as the Lions won their second straight.

Jay’zon Roberts had an interception for Cambridge-South Dorchester, Jeremy Taylor forced a fumble, and Ira Nichols had a fumble recovery.