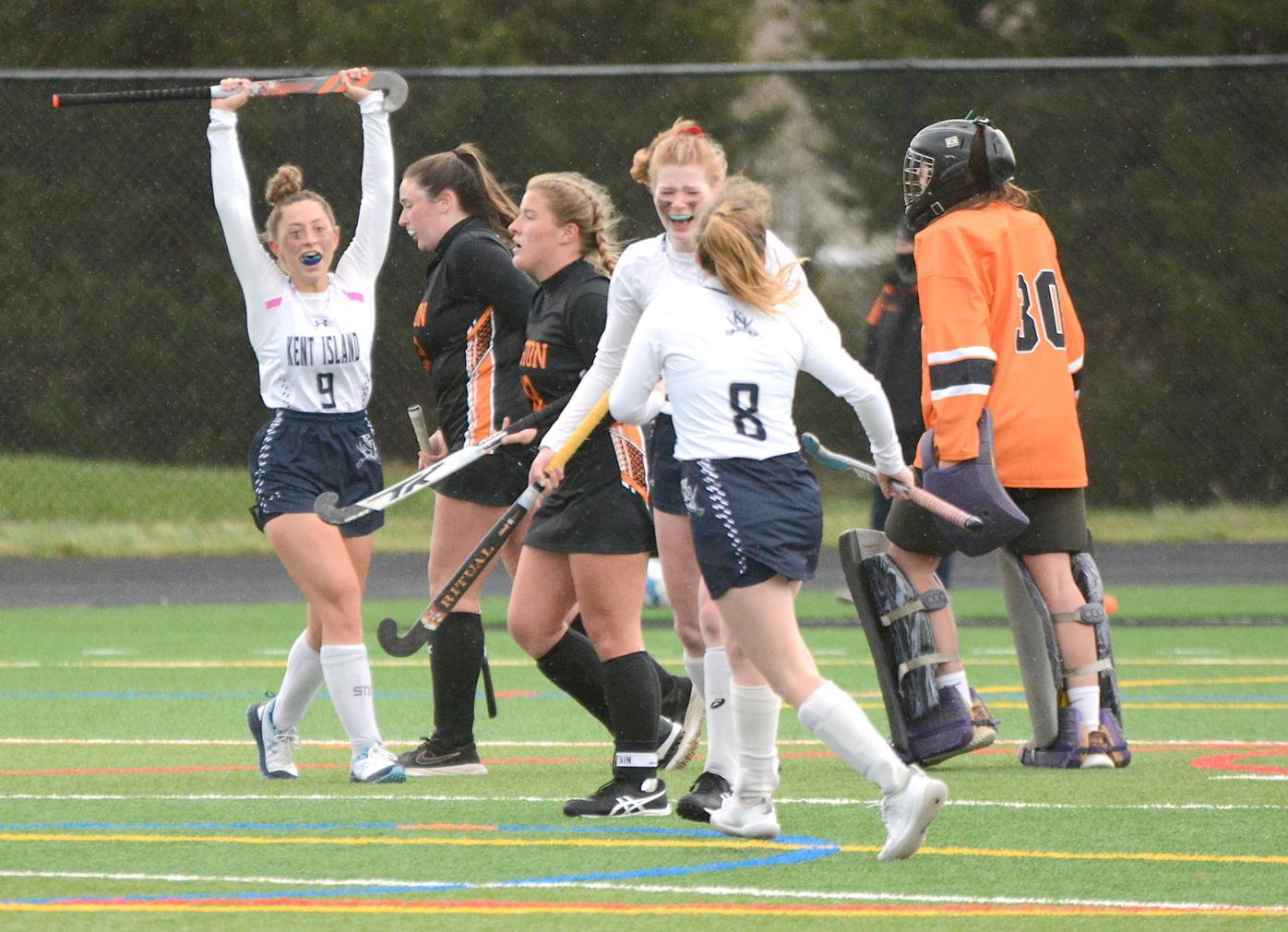 Kent Island’s Marley Waters (9) and Brookey Betcher (8) rush toward Megan Carpenter, center, on Thursday after her winning goal lifted the Buccaneers to a 2-1 victory over Easton.

Kent Island’s Marley Waters (9) and Brookey Betcher (8) rush toward Megan Carpenter, center, on Thursday after her winning goal lifted the Buccaneers to a 2-1 victory over Easton.

STEVENSVILLE — Megan Carpenter didn’t really know what was going through her head.

Carpenter gained possession of the ball and took off on a 65-yard sprint that included dodging a pair of defenders before driving the ball into the back of the cage with 6 minutes, 11 seconds remaining in the second overtime Thursday, lifting the Buccaneers to a 2-1 victory over previously unbeaten Easton at Andy Schipul Stadium.

“My heart was beating way too fast,” Carpenter said of her winning sprint. “I wasn’t really sure what I was going to do. I just went with it.”

And Wilt went with Carpenter’s request prior to entering the second 10-minute overtime period.

“So we had had Megan in the (first) overtime playing a midfield position,” Wilt said. “And when we went into the second overtime she said, ‘Can I take the front line?’ We discussed it and knew she has really great dodging skills. She thinks really well under pressure.

“And she knows what to do with the ball,” Wilt continued. “She can read a defender. So it was a smart move on her part to want to be there. I just went with it and they fed her the ball just as she had hoped they would, actually took it up the field, dodged those two defenders and …”

And ended a back-and-forth showdown that resembled two teams desperately trying to advance to the next round of the playoffs in a year where there is no postseason.

And more dramatic than the March 15 clash between the two teams, when Easton built a 3-0 lead and held on for a 3-2 victory. That win was the Warriors’ first over the Bucs since a 3-2 victory in the Class 2A South semifinals in 2012, when Szymanski was a senior playing for Easton.

Kent Island (6-1) appeared to take the lead twice in the second quarter yesterday, but both times officials ruled the goals did not count.

Brookey Betcher looked to have given the Bucs a 1-0 lead with 6:35 left before halftime when her shot dropped over the goal line. Officials initially ruled Betcher’s shot a goal, but after speaking with Szymanski and Wilt, and then conferencing among themselves, the two officials ruled no goal because the cage had been knocked off the goal line.

Kent Island was awarded a penalty corner and Ella Kaufman promptly sent a drive past Easton goalie Aubrey Lavezzo (20 saves) for another apparent 1-0 lead. But Kaufman’s goal was disallowed because the first shot off a penalty corner has to be 18 inches or lower. Kaufman’s drive was ruled higher than the standard height.

The teams entered halftime scoreless and continued their seesaw play through the third quarter before Easton’s Anna Roser made a run down right wing, cut left and had stepped just inside the circle when she fired a drive that went off the leg of Bucs goalie Allie Cimaglia and into the cage for a 1-0 Warrior lead with 2:11 left in the period.

Kent Island scored the equalizer with 11:18 remaining in regulation when Marley Waters sent a shot past Lavezzo for a 1-1 deadlock that wasn’t broken until Carpenter’s winning dash down field.