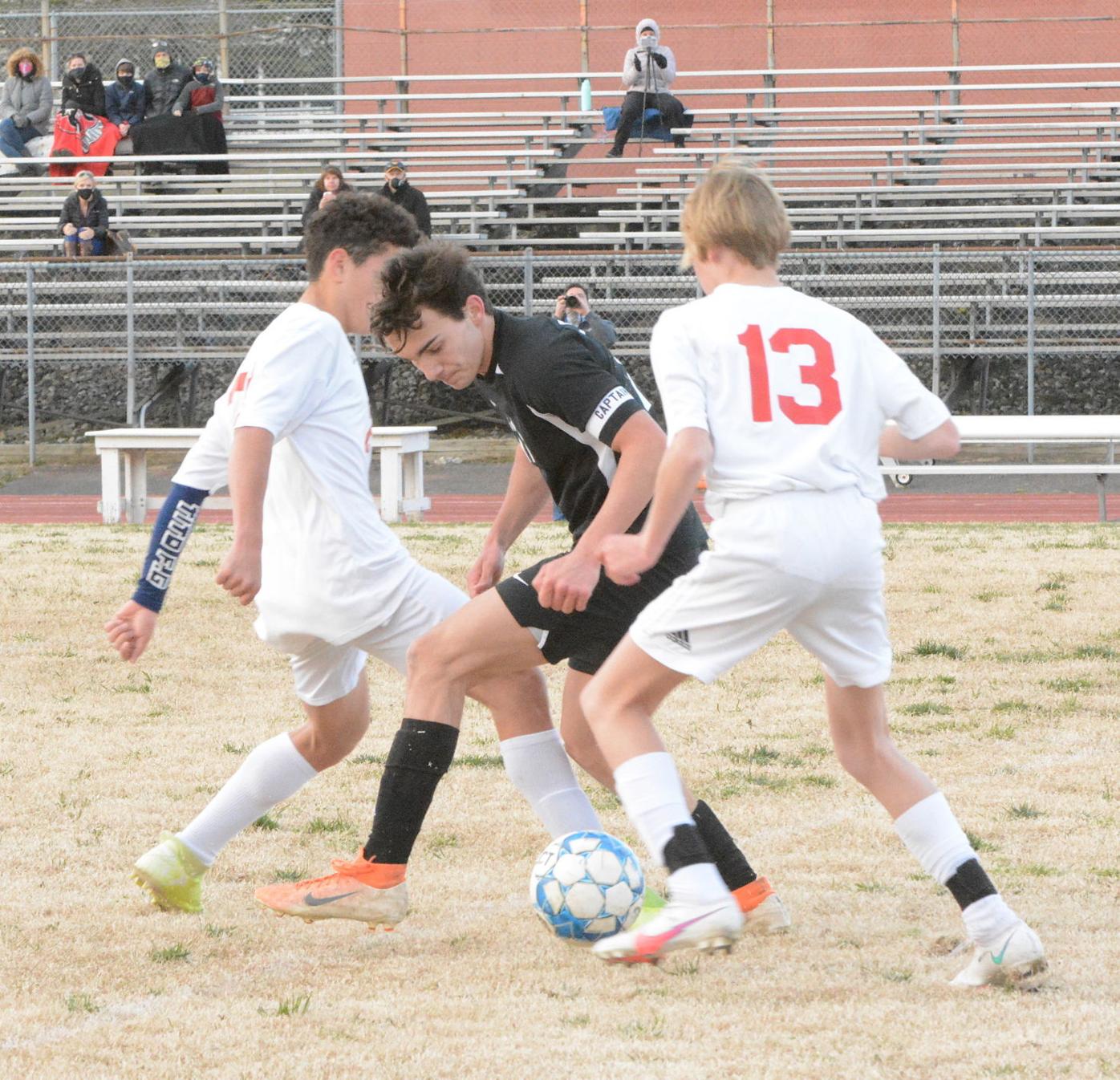 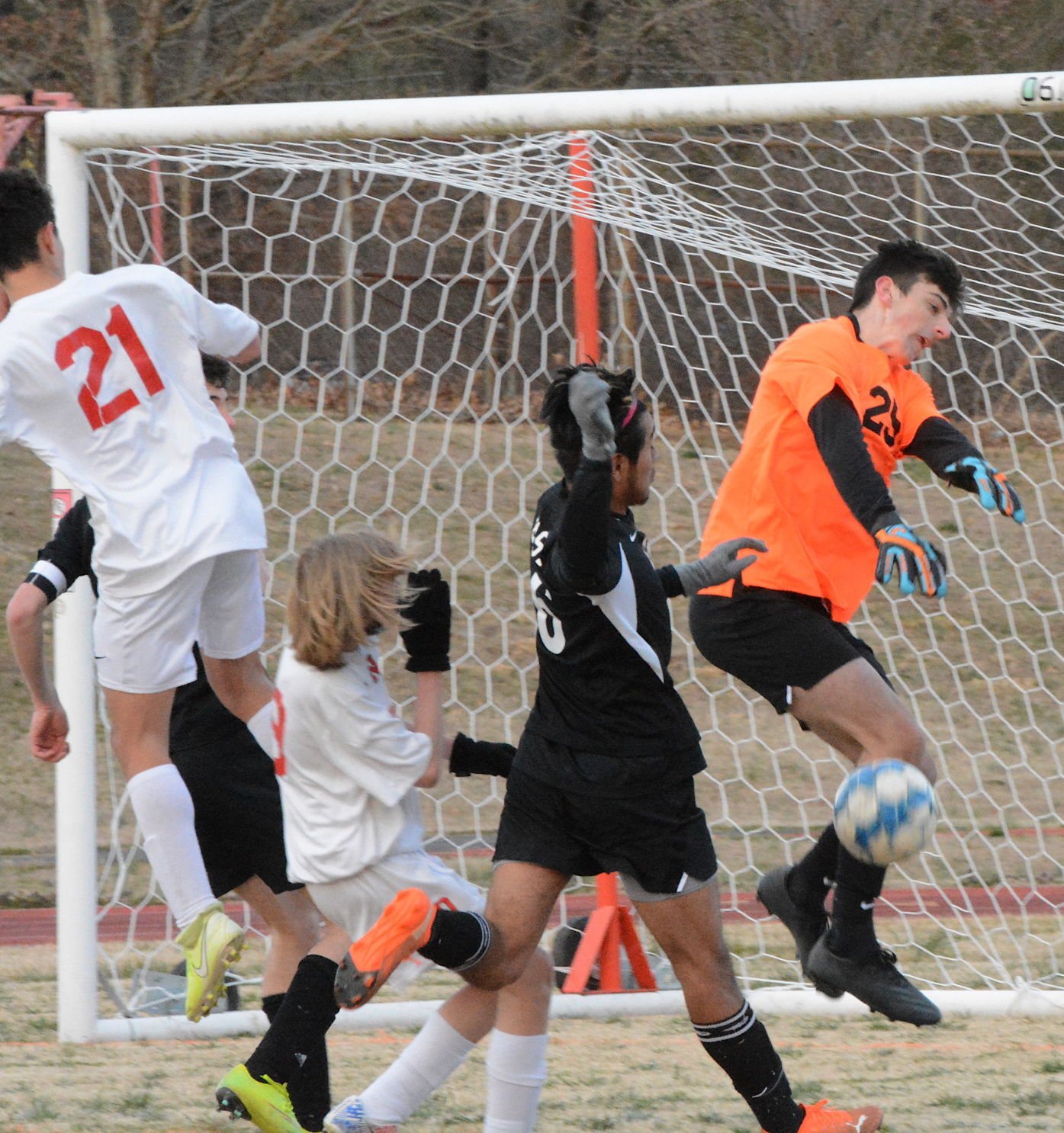 Easton keeper Andrew Matsche (orange shirt) makes a save late in the second half of Monday’s game against North Dorchester.

Easton’s Aiden Sundt (12) leaps to direct a header toward goal during the first half of Monday’s game against North Dorchester.

ALL EYES ON THE BALL: North Dorchester keeper Kaden H’Andte, far right, watches as a header from Easton’s Aiden Sundt (12) clears the crossbar during Monday’s first half.

Easton keeper Andrew Matsche (orange shirt) makes a save late in the second half of Monday’s game against North Dorchester.

Easton’s Aiden Sundt (12) leaps to direct a header toward goal during the first half of Monday’s game against North Dorchester.

ALL EYES ON THE BALL: North Dorchester keeper Kaden H’Andte, far right, watches as a header from Easton’s Aiden Sundt (12) clears the crossbar during Monday’s first half.

EASTON — Tristan Cassell didn’t care how the ball got in, just as long as it found its way into the back of the net.

That’s exactly what happened Monday night, as Cassell’s corner kick in the closing minutes of the first overtime deflected off a defender’s head then glanced off the keeper’s hands to give Easton High’s boys’ soccer team a 2-1 victory over North Dorchester.

“Honestly we wouldn’t of even been in that position if we didn’t have Tristan’s leadership today,” said John Pritchett, who notched his first win as Easton’s new head coach. “He stepped up and took this game by its bootstraps and said, ‘We’re not coming out of here with anything but a victory today.’”

Moments before his game-winning corner, Cassell sent another corner opportunity into the box in hopes the Warriors (1-1) would finally put away the scrappy Eagles (1-3).

“That didn’t go as planned, it went a little bit farther,” Cassell continued. “It ended up going out of bounds. We got another corner, and I said, ‘You know I’m just going to put this one on goal.’ I got a good touch on it and it found it’s way in, and that’s exactly what I was trying to do. And believe it or not I actually envisioned that exact moment, hitting the game-winner. I live for that. That’s what I play this game for.”

Easton took a 1-0 lead with 1:30 remaining in the first half. Easton’s Bredi Moralas-Perez struck a hard shot that Eagles keeper Kaden H’Andte made a nice initial stop on. But the rebound rolled away from H’Andte and Warrior freshman Jed Smith stepped in and deposited the games first ball into the back of the net.

The Warriors maintained that lead until the sixth minute of the second half, when North Dorchester captain Erick Valesquez hit a direct kick from about 25 yards out that floated just over the outstretched arms of Easton keeper Andrew Matsche.

“We did battle in the second half,” North Dorchester head coach Shane Abbott said. “I felt like we were really flat in the first half. It was not the team it was in the second half. We definitely battled back.”

Easton almost regained the lead with 11:25 remaining in regulation when Aiden Sundt steered a low, shot toward the left side of the net that H’Andte smothered just in front of the goal line to preserve the deadlock.

The Warriors continued pressuring North Dorchester’s goal in the closing minutes of regulation. Cassell guided a well-placed cross through the box but Easton couldn’t convert. A minute later Christan Smith drove a shot wide right and the game moved into the first 10-minute overtime.

Matsche came out of goal to play the field in overtime, and North Dorchester almost ended it when two of its players squeezed through the defense, with one hammering a shot that Easton backup keeper Angel Fernandez stopped with his knees before the ball caromed off to the left and was cleared.

Easton worked the ball back up the field and got its two corner opportunities, Cassell’s second deflecting off the two Eagles for the game-winner.

“We fought,” Pritchett said. “We didn’t play our best today. But the sign of a good team with a lot of character is to be able to fight through this. We’ve got a lot to work on. We’ve got a tough road ahead of us, but I’m glad we came out with the win.”

Easton (3-0) took a 1-0 lead when Kate Boldt scored off a pass from Maddi Spies. The Warriors extended their lead to 2-0 as Olivia Brown set up Kat Knox’s goal. Chandler then placed her stroke into the back of the cage for a 3-0 halftime lead against the Bucs (2-1).