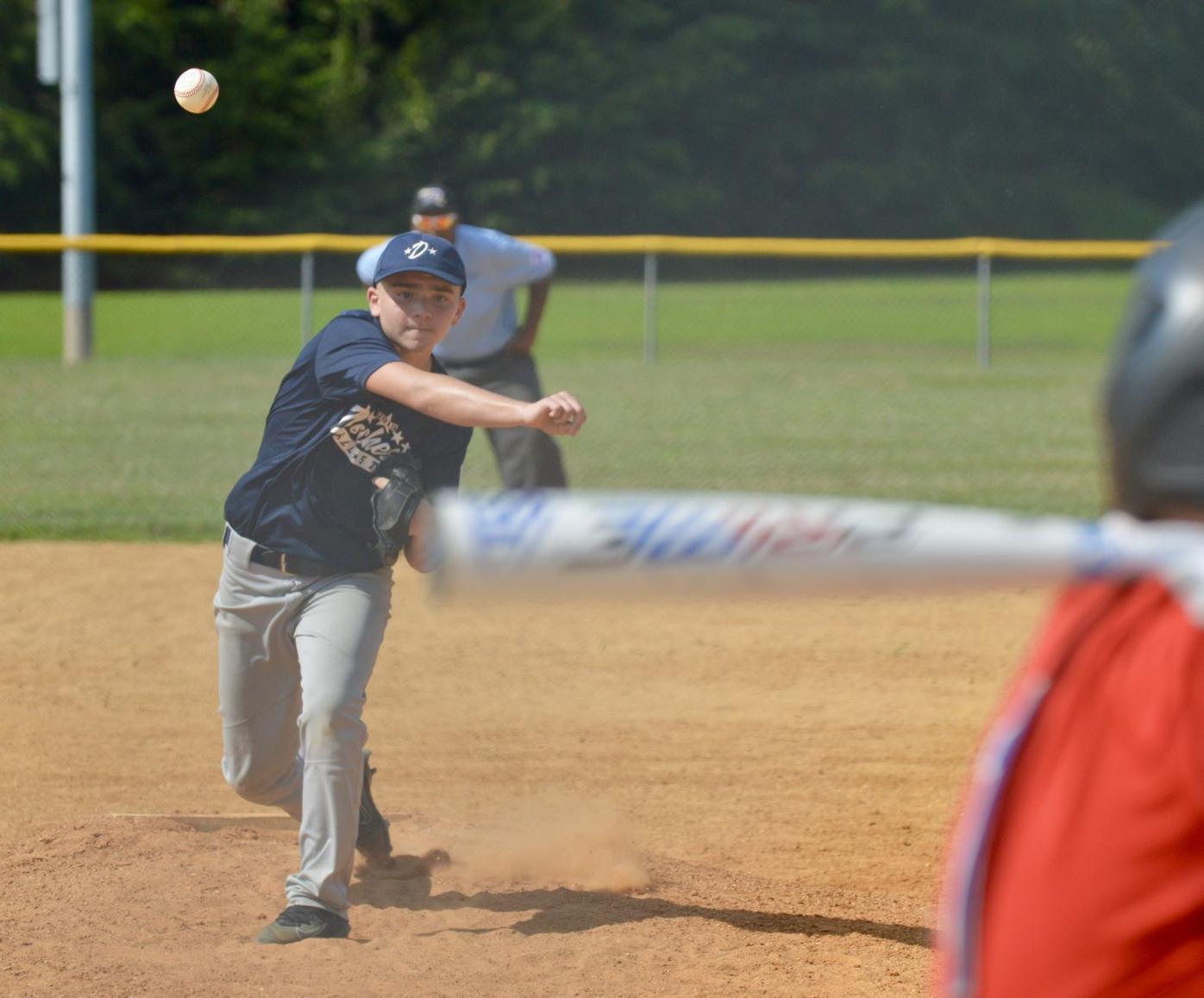 Dorchester District 6 right-hander Jaiden Brooks delivers a pitch against Greenbelt District 4 in the opening round of the Maryland Junior League Baseball Tournament on Saturday in Waldorf. 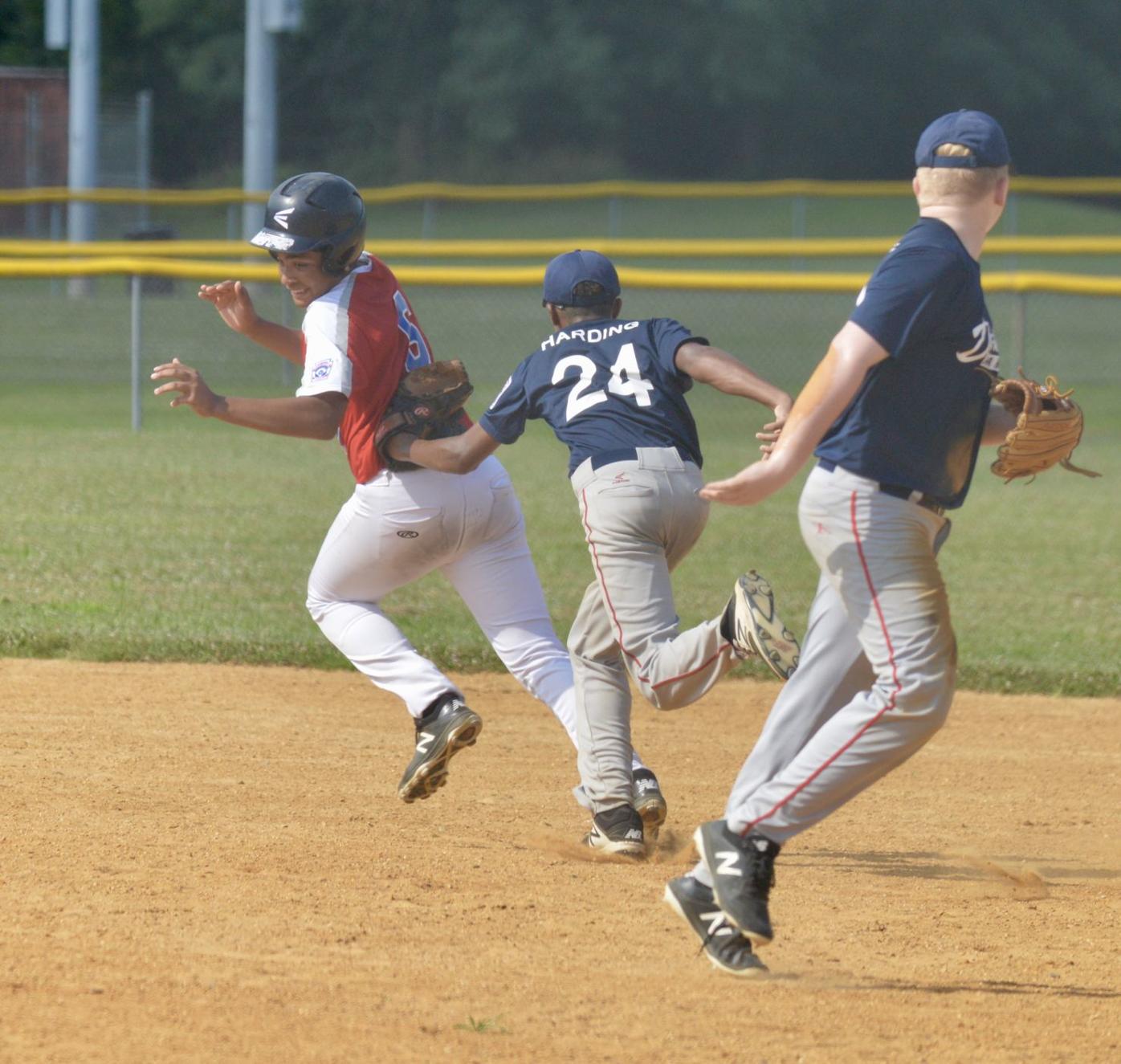 Dorchester District 6’s Jordan Harding tags out Greenbelt District 4’s Luis Arias after he was picked off first base during the third inning Saturday afternoon in Waldorf.

Dorchester District 6 right-hander Jaiden Brooks delivers a pitch against Greenbelt District 4 in the opening round of the Maryland Junior League Baseball Tournament on Saturday in Waldorf.

Dorchester District 6’s Jordan Harding tags out Greenbelt District 4’s Luis Arias after he was picked off first base during the third inning Saturday afternoon in Waldorf.

Jordan Harding knocked in four runs and Brice Bradley drove in three as Dorchester crushed Greenbelt District 4, 23-1, in its opening game to advance into the winner’s bracket of the double-elimination tournament.

Dorchester only needed three at-bats to amass its scoring output, scoring five in the first, four in the second, and 14 in the third inning for a quick mercy-rule win.

On the mound, Jaiden Brooks, Daniel “Chunky” Hesson, and Jordan Harding, backed by solid defense, held Greenbelt to a single run in the top of the fourth inning.

“We played pretty good all the way around,” Dorchester manager Billy Creighton said. “We pitched good, we hit good, we ran the bases good and played defense. We did everything pretty good. That team’s probably not the best team we’ve seen in either tournament so far but I think we did a lot of things right.”

Rodrigo Avila and Alessandro Granados smacked back-to-back doubles off Harding in the fourth to account for Greenbelt’s run.

Brooks earned the win, tossing the first two innings of shutout ball, striking out three while allowing two hits and one walk.

Harding went 3 for 4 with a pair of doubles. Brooks reached base four times in four plate appearances and scored four runs.

Dorchester got started when Jamarian Wongus reached base on an error in the bottom of the first. Wongus stole second and took third on a wild pitch. After Brooks walked, Wongus scored on a throwing error. With two outs, Harding lined a base hit up the middle to plate Brooks. Hesson followed with a two-run single to right. He stole second and scored on a base hit to right by John Boyle for a 5-0 lead.

Dorchester sent 18 batters to the plate in the bottom of the third. Vernon Price contributed a two-run single to right and Harding belted both his doubles in the inning to highlight an eight-hit attack.

Dorchester District 6 kept its offense rolling from its first-game victory by scoring four runs in the top of the first inning in Saturday’s nightcap against Conococheague District 1 of western Maryland.

Dorchester’s Jamarian Wongus looped a single to left and stole second to open the game. He moved to third on a ground out off the bat of Jaiden Brooks and scored on a base hit to left by Matt Corkran. Devin Rottman then walked and Brice Bradley, Jordan Harding, and Daniel Hesson followed with singles. Corkran scored on Harding’s hit. Talan Middleton then smacked a high fastball down the left-field line to plate two runners to make it 4-0.

Conococheague scored a run in the first on an RBI double by Cole Gallihugh. Wyatt Divelbiss had walked to open the at-bat and scored on the hit. Treyvor Trovington and Christian Luhn also walked to load the bases, but Rottman fanned the next two batters to hold Conococheague to a single run.

Jordan Brown, Conococheague’s starting pitcher, retired Dorchester in order in the second and his team added two runs in the bottom of the inning to close within 4-3. Dylan Shifflett and Divelbliss walked. Shifflett took third on a passed ball and scored on a fielder’s choice off the bat of Landon Myers. Divelbliss scored on a wild pitch.

Rottman recorded his fourth strikeout to leave the tying run at second.

Dorchester then padded its lead in the third. Rottman reached on a infield hit and moved to second when Harding was hit by a pitch. Hesson followed with an RBI single to right. Harding scored on a ground out off the bat of Middleton to make it 6-3 before distant lightening delayed the game for a half hour.

After the delay, John Boyle plated Hesson with a single to left. Boyle took second on a wild pitch and scored on an outfield error on a fly ball by Vernon Price for an 8-3 lead.

Conococheague added two in the bottom of the third off reliever Brice Bradley to make it 8-5, benefitting from three Dorchester errors. Brown knocked in a run with a grounder off the second-base bag. Bradley induced a comebacker for the third out to leave the bases loaded.

Brown held Dorchester scoreless in the top of the fourth before Conococheague took their first lead with six runs in the bottom half to go up 11-8. Alex Bromwell, Noah Straitiff, and Divelbliss each had an RBI and Meyers rapped a three-run double to left.