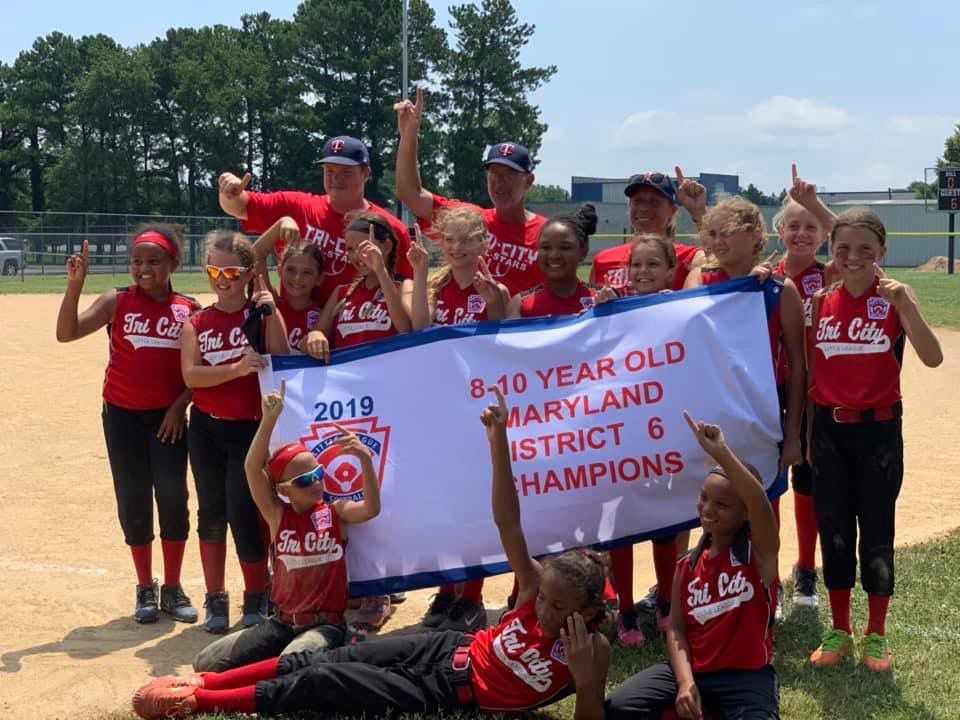 Tri-City celebrates its 2019 District 6 championship in the 8-10-year-old softball bracket Saturday morning in Hurlock. Tri-City defeated Easton 6-2 to advance to the state tournament next week, which is also in Hurlock. The team’s first game is at 5:30 p.m., Saturday, July 13. 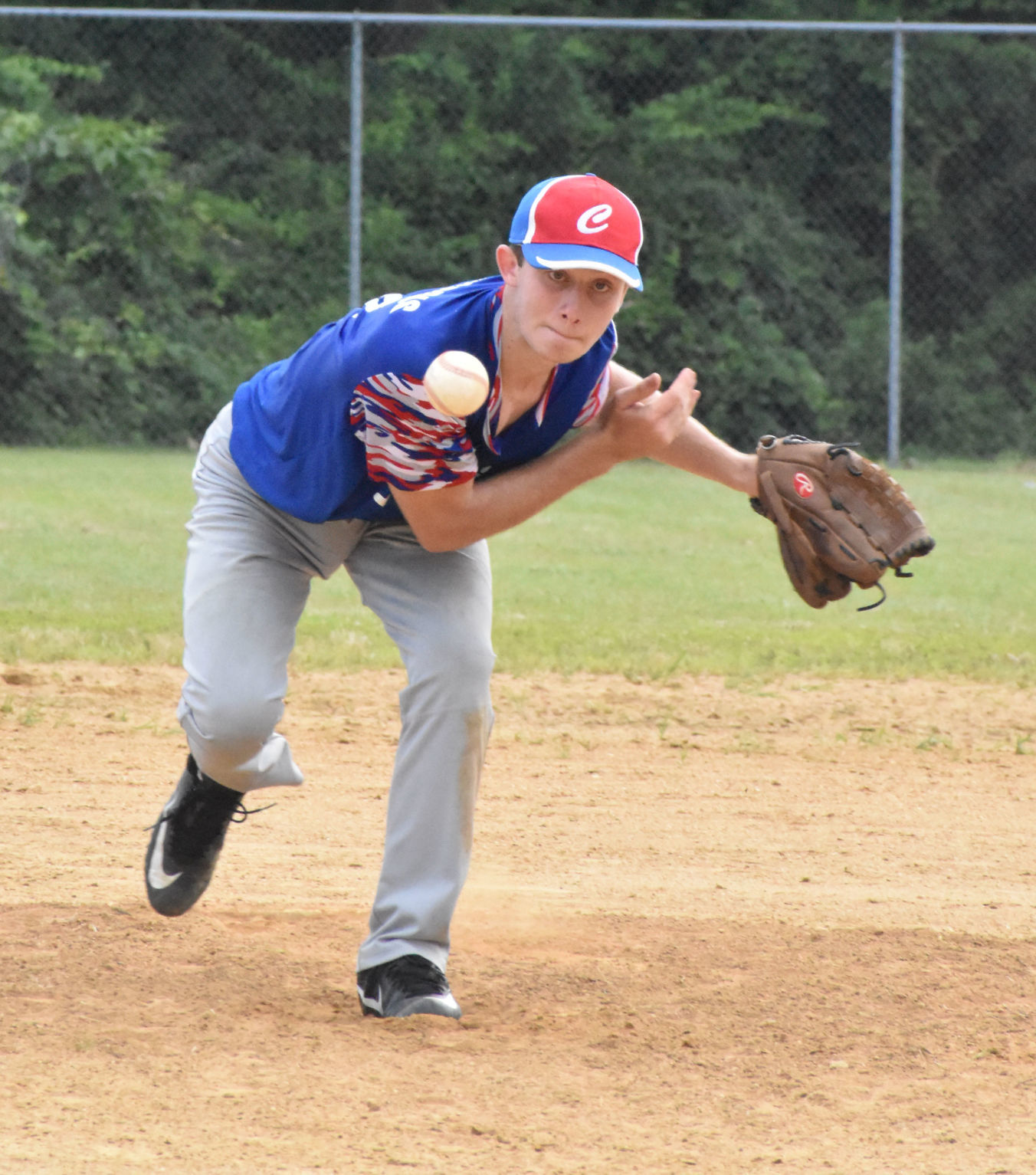 Caroline reliever Jack Morris, who shares a name with a Major League Baseball Hall of Famer, delivers during the third inning of Saturday’s game against Kent County. 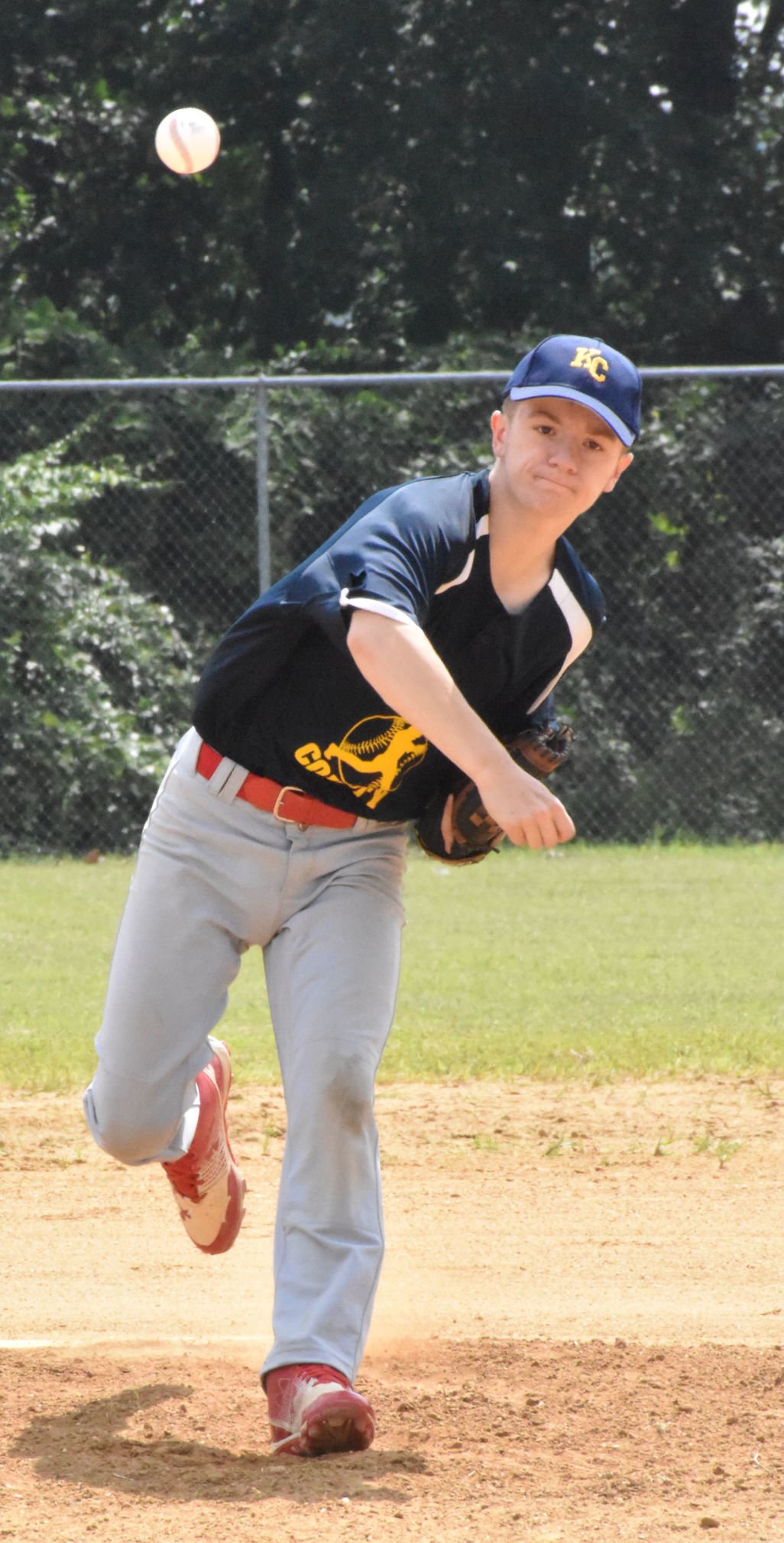 Tri-City celebrates its 2019 District 6 championship in the 8-10-year-old softball bracket Saturday morning in Hurlock. Tri-City defeated Easton 6-2 to advance to the state tournament next week, which is also in Hurlock. The team’s first game is at 5:30 p.m., Saturday, July 13.

Caroline reliever Jack Morris, who shares a name with a Major League Baseball Hall of Famer, delivers during the third inning of Saturday’s game against Kent County.

The Little League playoffs keep on rolling, with district as well as state-level play underway right now all across the state.

In softball, the Tri-City 8-10 all-stars won the District 6 title Saturday morning in Hurlock.

“We ended up playing Talbot three times, the way the bracket worked out,” Tri-City head coach Kareem Otey said. “We won the first one, then lost the next one, but won the big game today.”

Talbot opened with a defeat of Caroline, the third team in the three-competitor bracket, and then fell 4-3 to Tri-City in the win-bracket final.

Talbot stayed alive by defeating Caroline in a rematch on Wednesday and earned a second go with a district foe, this time Friday against Tri-City in what would’ve been the championship, had Tri-City come out on top.

Instead, Talbot won, 5-4, forcing a second championship in the double-elimination bracket. Saturday morning, in that “if-then” contest, Tri-City came out on top, 6-2, to capture the banner.

The new District 6 champs, Tri-City will play next at the 8-10 state tournament, also in Hurlock, at 5:30 p.m. on Saturday, July 13. They’ll take on the winner of a game earlier that day between the District 5 and District 7 champs.

In state softball playoffs, the District 6 10-12 champs from Caroline County began their next level of play in Sharpsburg.

In a hard-fought opener, District 6 fell to District 8, which represents the Lower Eastern Shore, 2-0.

The District 6 champs stayed alive the next day, winning a pair of elimination games to advance, but fell again to District 8 on Monday night, 2-1, and were eliminated, finishing third in the state.

Cambridge advanced to the next round in the win bracket, but fell 14-4 to tournament host Homerun Baker on Saturday night.

In the other game at Perry Cabin Park on Saturday evening, Easton won its opener, 10-0, over Kent, advancing in the win bracket. South Caroline eliminated Kent County on Sunday, and at the same time, Easton put Tri-City in the loss bracket, winning 10-4.

Monday night, Tri-City eliminated Caroline North/Denton, 11-9, and Cambridge fell to South Caroline 13-3. South Caroline and Tri-City played Tuesday in an elimination game, but the results were not known at press time.

Starter Kyler Boyd (1-0) got the win in Caroline’s opener, allowing a single, unearned run; the Caroline offense, which rolled through district play by scoring 39 runs in three games, was up to its old habits too.

Caroline used a pair of five-run rallies, in the top halves of the second and fifth, to turn the game into a 14-2, rout-rule defeat of District 7 champ St. Mary’s.

“We had eight players with 11 total hits, Kyler Boyd going 3 for 4 with a double, and Tanner Young going 2 for 4 with a double,” said Mike Willoughby, who shares head coaching chores with Warren White and Jerry Stewart. “Plus of course Jayden Watkins with the home run. We hit the ball really well today.

“It was a total, total team effort, no doubt,” Willoughby said. “I think we scored from every spot in the lineup except one, and that player (P. J. Gunther), he drove in two runs for us.

“We used four pitchers today, but the way the weather was, I think that was actually a good thing,” Willoughby added. “This weather has been rough; it’s hot, plus the humidity, it can really take it out of you. ... Hats off to our catcher today, Adam Boyles. He kept the gear on for the whole game. And even though it only went five innings, it was awfully hot.”

This was very true, especially to fans of Junior League baseball, whose district tournament opened Saturday at Lockerman Park in Denton.

During the first game, between host Caroline County and Kent County, the starting pitcher for Kent, and then the home plate umpire, had issues with the muggy, humid day.

Though Kent starter Braiden Bakeoven stayed in the game after getting overheated in the first inning, he got relieved very shortly thereafter. On the other hand, the plate umpire had to come out before the second inning began, as paramedics arrived on the scene from Denton and county emergency services to lend a hand.

Though the home plate ump left under his own power, we hope he’s doing well now. Thanks, as always, to the local EMTs, for their work.

In that first game, play resumed after a stoppage of about 35 minutes, but was suspended again later due to lightning. In the end, Kent prevailed, 12-9.

Saturday’s junior-baseball nightcap, between Talbot and Dorchester, didn’t begin until 8 p.m., but in the end, Dorchester won by rout rule, and then beat Kent10-8 the next night to make the championship on Tuesday (and, again, results were not available when this paper went to the press).

Also on Sunday, Talbot steamrolled Caroline 24-3, eliminating the tournament host. Monday night in the loss-bracket final, Talbot knocked Kent out, 14-4, to earn a spot in the final against Dorchester, needing two wins. Results can be found in the Star Democrat later this week.

In Junior League softball, the Dorchester all-stars began the state tournament Saturday with a 14-2 victory over St Mary’s County, in Willards. In their second game Saturday, they shut out Delmar 10-0.

On Sunday, they lost 8-1 in the opener to Havre de Grace, but rebounded with a 10-3 victory over Hancock to earn a championship game berth. Cambridge is scheduled to play at 6 p.m. Monday against Havre De Grace. They will need to win twice to win the title, the second game, again, being Tuesday, after press deadlines.

A final note: Please make sure that, if you go to a game, you stay hydrated. I started feeling a little rough myself in Denton after a long day in the heat. We all think we know better until we find out we were wrong, so be smart about handling these muggy Mid-Shore summers.

From the Bleachers: David Insley