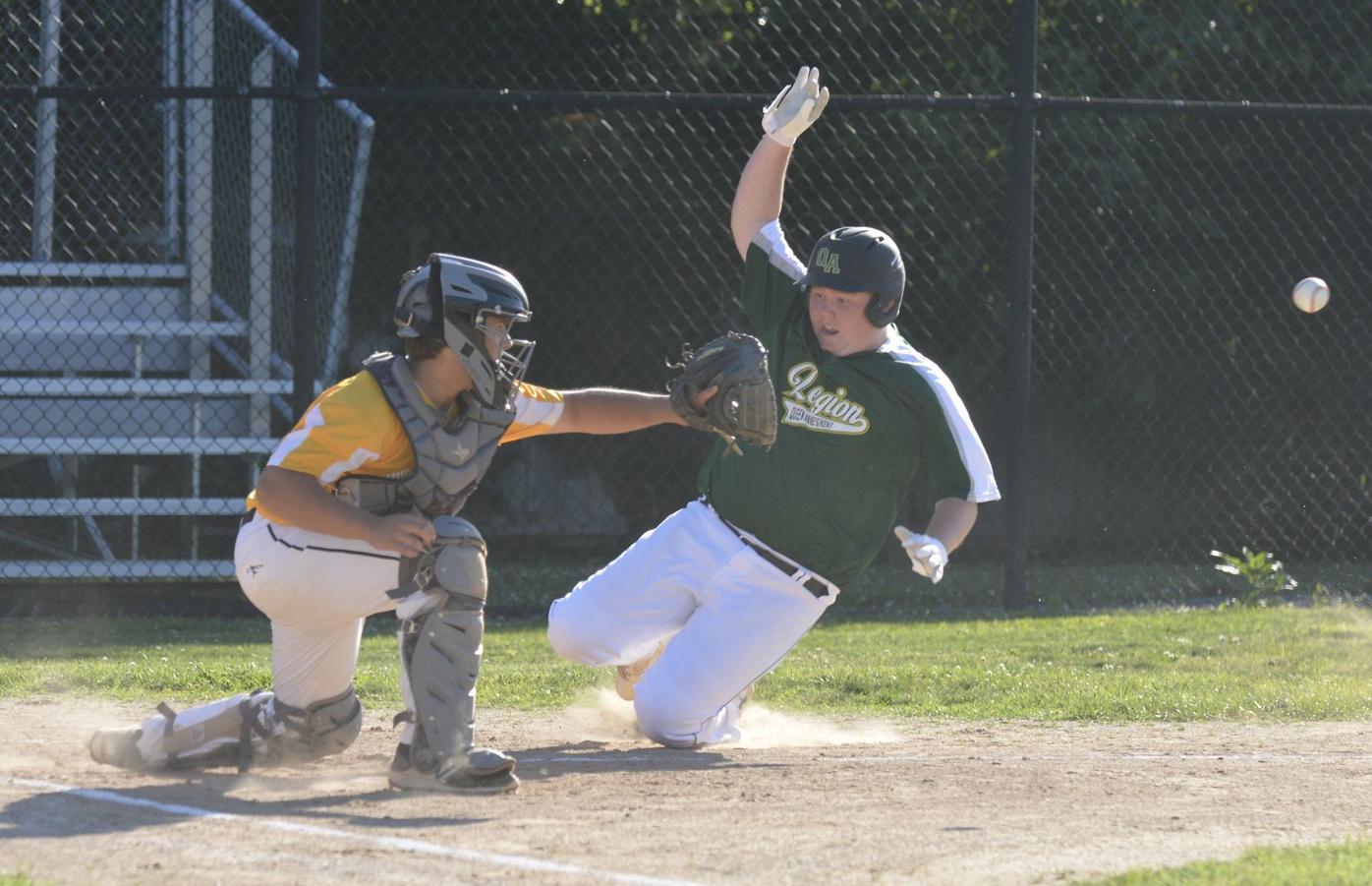 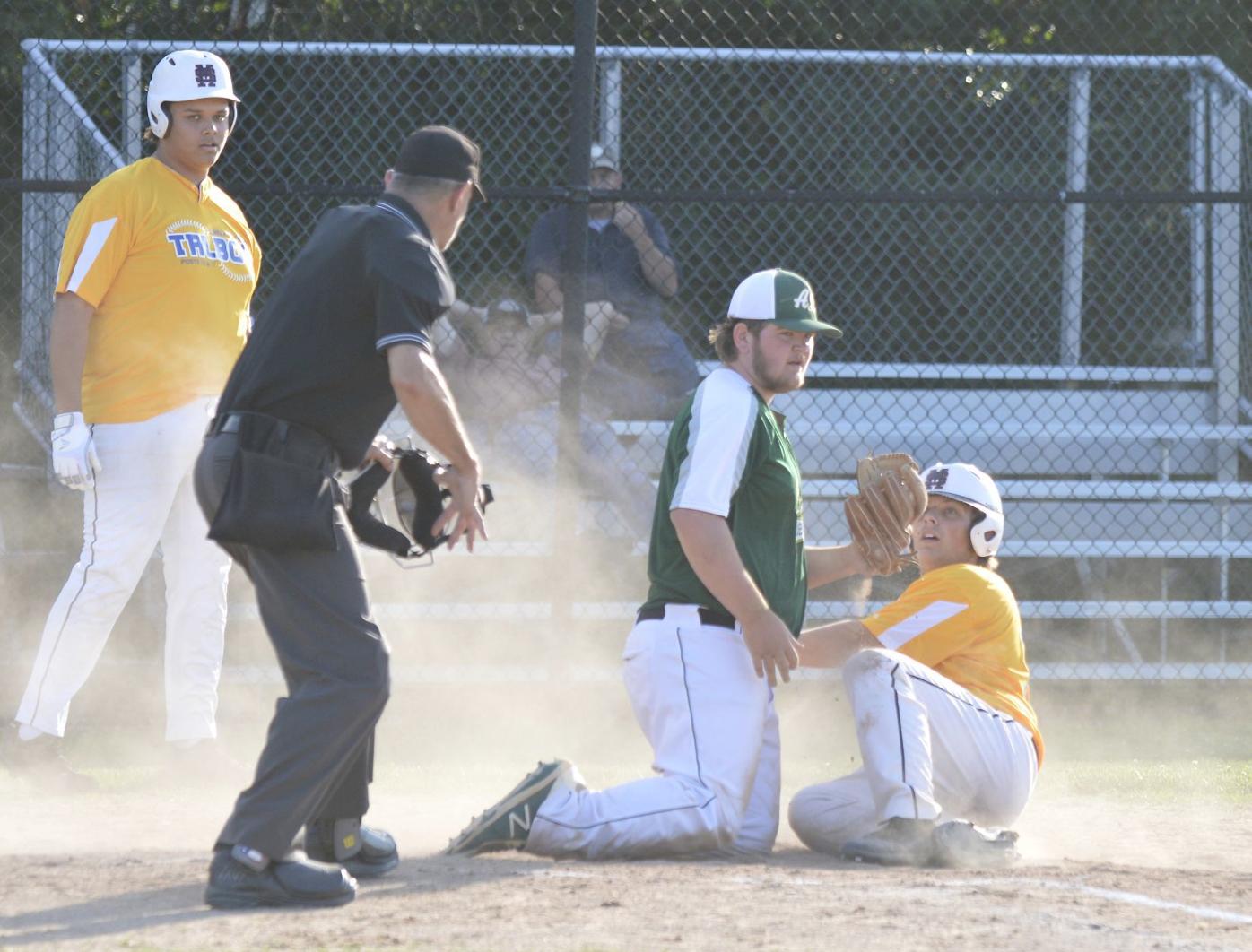 Talbot’s Jeremy Patchett is out at the plate, trying to score on a wild pitch, on a tag by Kent-Queen Anne’s pitcher Mitch Gunther during the second inning Tuesday evening in Easton. 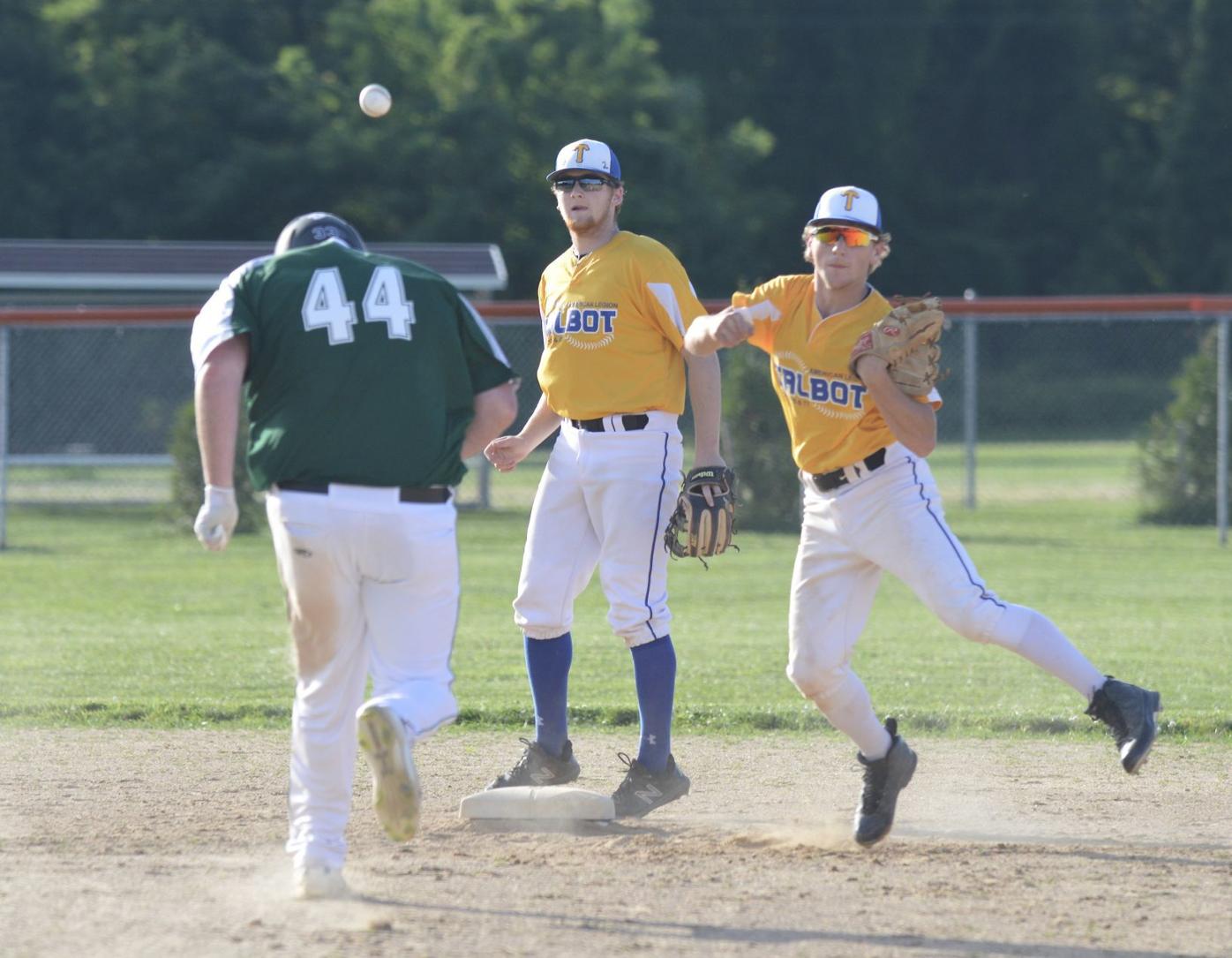 Talbot shortstop Trent Weems throws to first base to complete a double play during the third inning Tuesday evening on Easton. Running on the play is Kent-Queen Anne’s Carson Tucker and watching the throw is Talbot second baseman Ashton Achternach. 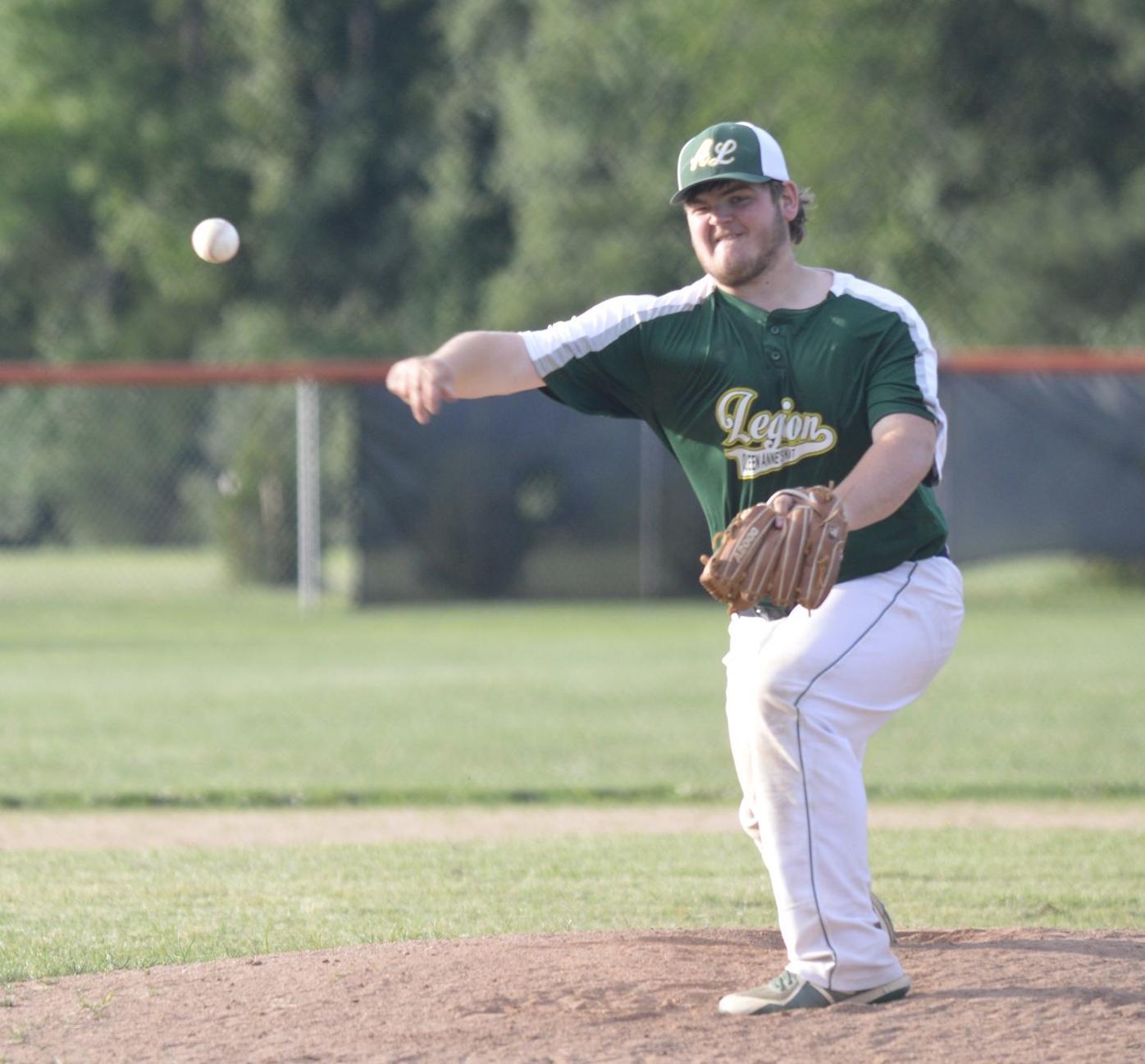 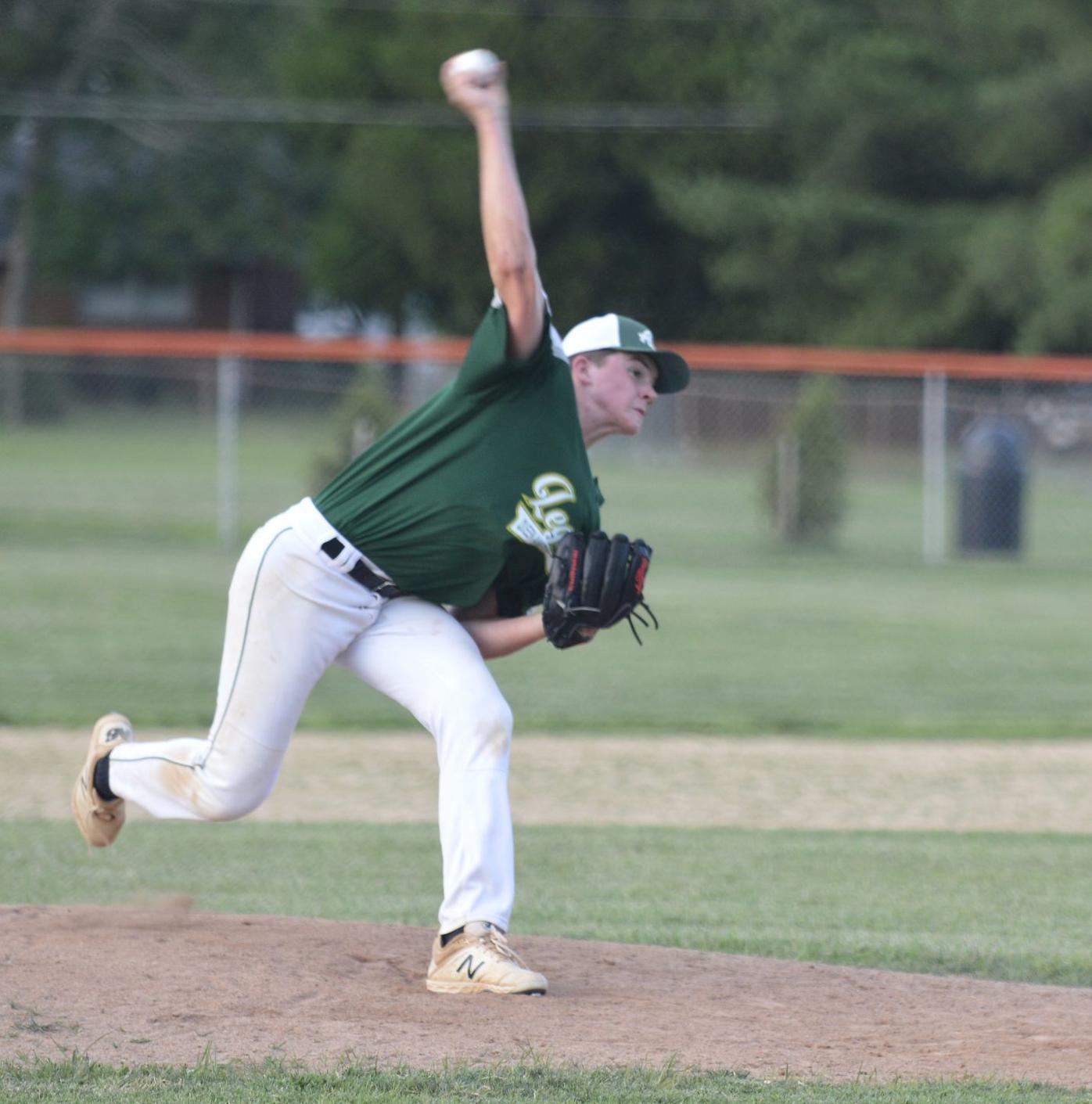 Talbot’s Jeremy Patchett is out at the plate, trying to score on a wild pitch, on a tag by Kent-Queen Anne’s pitcher Mitch Gunther during the second inning Tuesday evening in Easton.

Talbot shortstop Trent Weems throws to first base to complete a double play during the third inning Tuesday evening on Easton. Running on the play is Kent-Queen Anne’s Carson Tucker and watching the throw is Talbot second baseman Ashton Achternach.

EASTON — Mitch Gunther scattered three hits in six innings for the win and Colin Athey knocked in the winning run in the top of the seventh inning Tuesday evening to lead Kent-Queen Anne’s Post 18 to a 6-4 victory over Talbot Post 70 in American Legion baseball.

Malik Roy walked off Talbot reliever Ashton Echternach, took second on a passed ball, and scored on Athey’s one-out line-drive single up the middle to put Post 18 ahead 5-4. Carson Tucker followed with an RBI double to deep left-center field for an insurance run.

Athey also earned a save in relief. Talbot’s Grant LaBelle reached first base on catcher’s interference to open the bottom of the seventh. He was forced out at second after a grounder off the bat of Trent Weems. Athey then fanned the next batter and induced a comebacker to the mound to end the game.

Gunther struggled in the second inning but pitched well overall, allowing four runs (two earned) on three hits and four walks, with three hit-batters and a wild pitch through six innings. He opted for a more sidearm delivery starting in the middle innings to take better command of the strike zone.

“Good game wasn’t it?” Post 18 manager Chris Fitzgerald said. “Mitch coming in and pitching a game like that, I had a hard time pulling him there at the end. But I thought it was the right thing to do. He was about 15 pitches away from throwing too many, so I figured I’d start Athey fresh there at the end. We had some clutch hits today from some of these young kids.”

Post 18 opened with two runs in the top of the first. Leadoff hitter Siwold looped a single to right off Talbot starter Brennan Lyons. Lyons fanned the next two batters before Tucker singled to right. Gunther walked to load the bases. Austin Doyle then smacked a two-run base hit to right.

Talbot’s Aubrey Perry reached on an error in the second. Jeremy Patchett was hit by a pitch and Isaac Dressler walked to load the bases. Jackson Cronan walked to force home Perry. Patchett, trying to score on a wild pitch, was tagged out by Gunther at the plate after a feed from catcher Siwold for the first out. Eddie Robinson walked and Weems was hit by a pitch again to force home Dressler, but Gunther induced a double play to hold Post 70 to a one-run lead. Third baseman Doyle fielded a grounder, touched third, and threw to first for the second and third outs.

“That was a big play. I thought he was going to come home with it, but he made the smart play and went 5 to 1,” Fitzgerald said of the double play. “That was a nice heads-up play by Doyle.”

After three scoreless innings for Post 18, Jason Kazmarack reached base on an error to get a two-run fifth started. Siwold followed with a single through the shortstop-third hole. With one out, Athey was hit by a pitch to load the sacks. A check-swing grounder by Tucker led to another Talbot error, allowing Kent-Queen Anne’s third run to score. With two outs, Siwold scored on a wild pitch for a 4-3 Post 18 lead.

Talbot tied the game at 4-4 in the bottom of the fifth. Weems singled to right, stole second, advanced to third on an error, and scored on Cassell’s sacrifice fly.

Gunther fanned two of three Talbot batters in the sixth before giving way to Athey in the seventh.

Lyons allowed four runs (two earned) on six hits, a walk, and a hit-batter, with one wild pitch in five innings. Echternach allowed two runs on two hits and a walk in the final two innings.