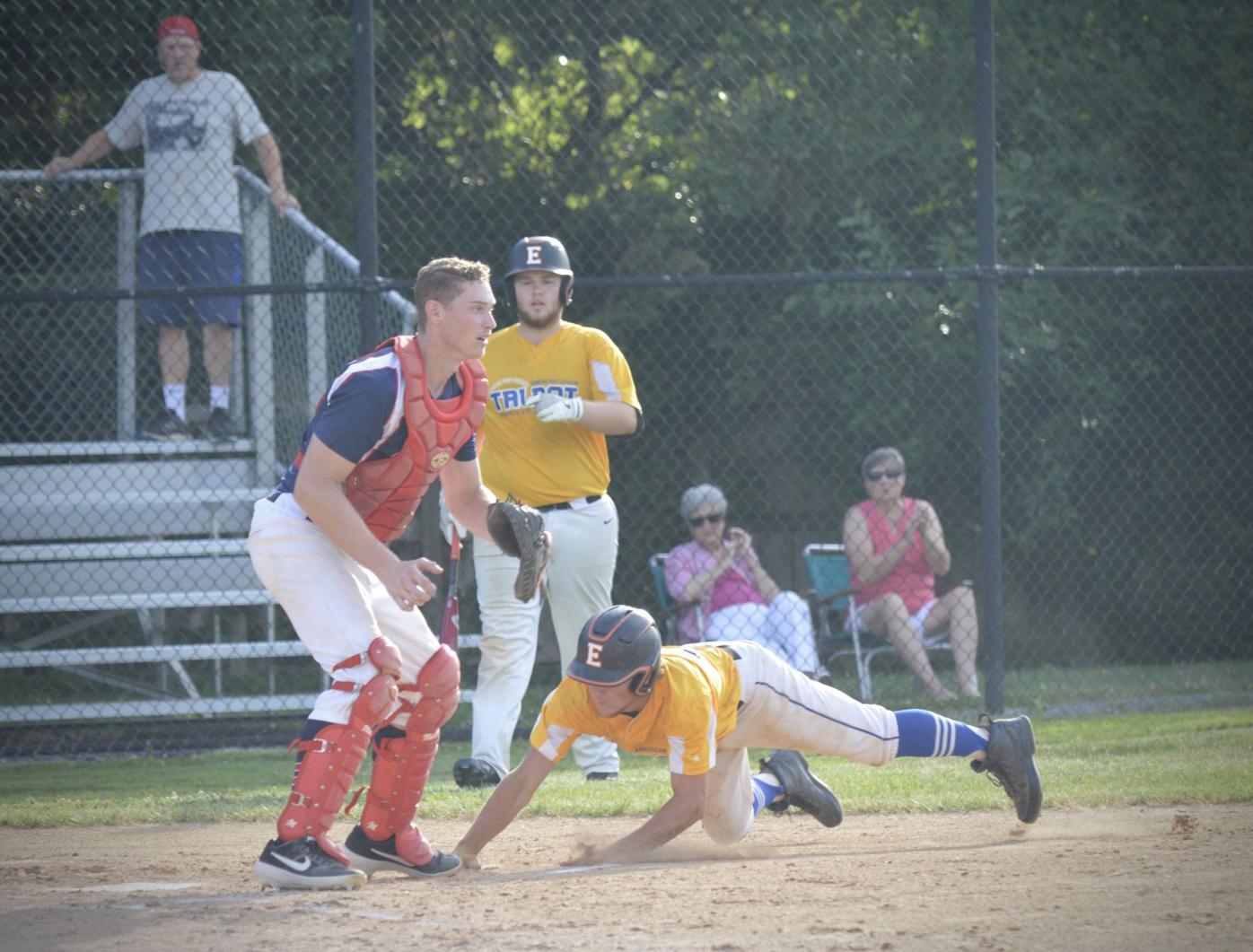 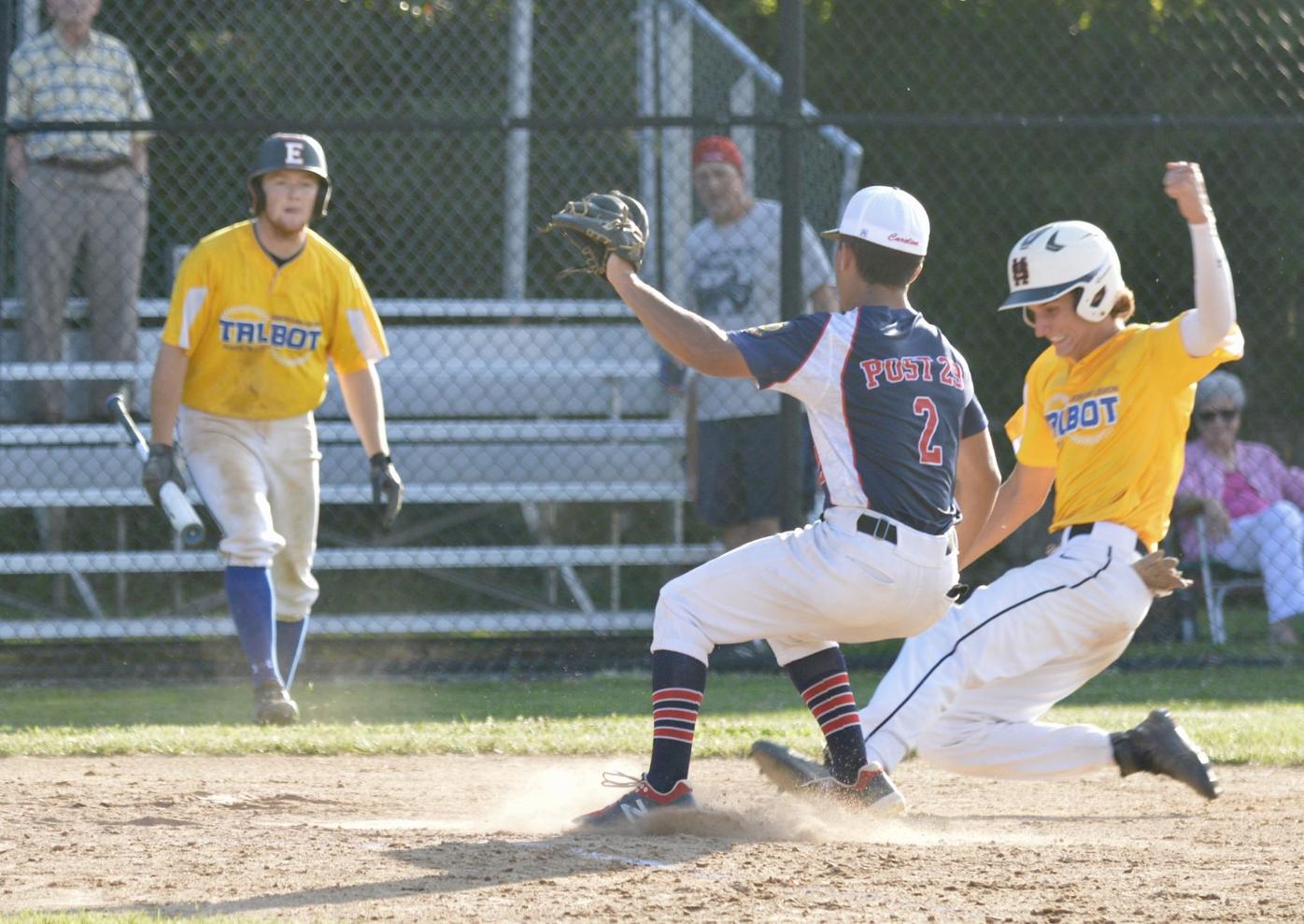 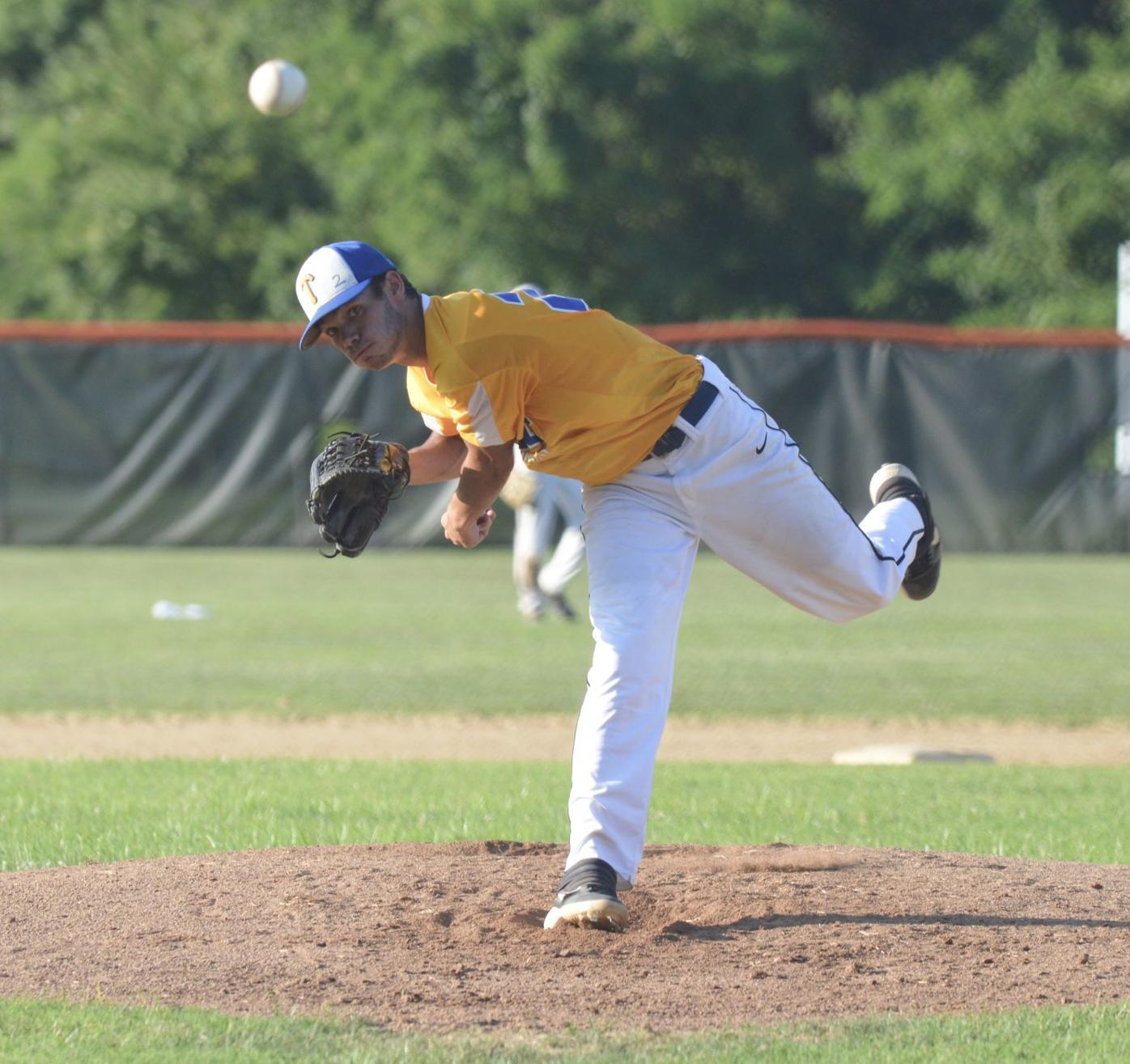 Talbot Post 70/77 left-hander Jaden Cassell follows through on a delivery during his team's 10-1 victory over Caroline Post 29 on Thursday evening in Easton.

Talbot Post 70/77 left-hander Jaden Cassell follows through on a delivery during his team's 10-1 victory over Caroline Post 29 on Thursday evening in Easton.

Cassell pitched three perfect innings to open the game before surrendering Caroline’s only run in the fourth. He also retired the side in order in the fifth before reliever Jack Vener tossed a perfect final two frames.

Weems, Talbot’s leadoff hitter, scored three runs including the game’s first run in the bottom of the first. Nick Newnam knocked Weems home with a single in the first and Newnam added an RBI fielder’s choice in the fifth. Logan Bailiff smacked a two-run single in Talbot’s five-run second.

Talbot travels to Caroline at Colonel Richardson High at 6 p.m. on Monday for a chance to sweep their postseason series of the American Legion Eastern Shore District North Division. If Post 29 wins, the final is scheduled for Tuesday in Easton. The series winner advances to the state tournament, July 29, in Cumberland.

“We came out early hitting the ball,” Talbot manager Albert Pritchett said. “We also got off to an early start throwing strikes, played very good defense behind Jaden to start off. Scored early, held them early, which I think set a good tone for the rest of the game.”

Post 29 only dressed 11 players and was missing its starting catcher, who is expected to play Monday.

After Weems walked off Post 29 starter Tyler Stanley, Cassell moved him to second with a sacrifice bunt. Newnam then delivered a line-drive base hit up the middle to knock in Weems. Newnam advanced to second on a fielder’s choice and scored on a single to right by Ashton Echternach for a 2-0 Talbot lead.

Nick Christopher was hit by a pitch to get Talbot going in the second. With two outs, Cassell, Newnam, and Bailiff each singled, Cassell benefitting from a perfectly placed swinging bunt down the third-base line. Bailiff came home on a wild pitch/strikeout with Echternach at bat for a 6-0 lead. Echternach moved to second when Jeremy Patchett walked and scored on a bloop single to right by Aubrey Perry.

Post 70/77 added another run in the third to make it 8-0. Weems walked off reliever Ty Scott, stole second, and scored on Cassell’s single to left.

On the mound, Cassell retired Post 29’s first 11 hitters before Scott singled into the left-center gap with two outs in the fourth. Carmine Poppitti then walked before Nathan Roth singled up the middle to knock in Caroline’s lone run.

Talbot added two more runs in the fifth, but came up one run short of a slaughter-rule victory. Isaac Dressler walked before a two-base error on a grounder off the bat of Weems put both runners in scoring position. Newnam followed with his RBI-ground out and Weems scored on a wild pitch to end the scoring.

“This is Colonel and North Caroline, we’re St. Michaels and Easton, we certainly know our opponent,” Pritchett said. “They (Post 29) hit the ball. They’re really tough with two strikes. They throw strikes. They almost never get themselves into trouble. We just feel fortunate to have hit the ball really well tonight.”

Talbot did not commit a fielding error.

Four batters who walked and a hit batter scored for Talbot.

“We have to hit better and pitch better and maybe bring a little energy, but we’ll be back Monday and we’ll see what we can do,” Post 29 manager Ryan Blanchfield said.

Blanchfield said Remy Mangum was scheduled to pitch but was forced into catching duties because of the absence of the team’s regular catcher.