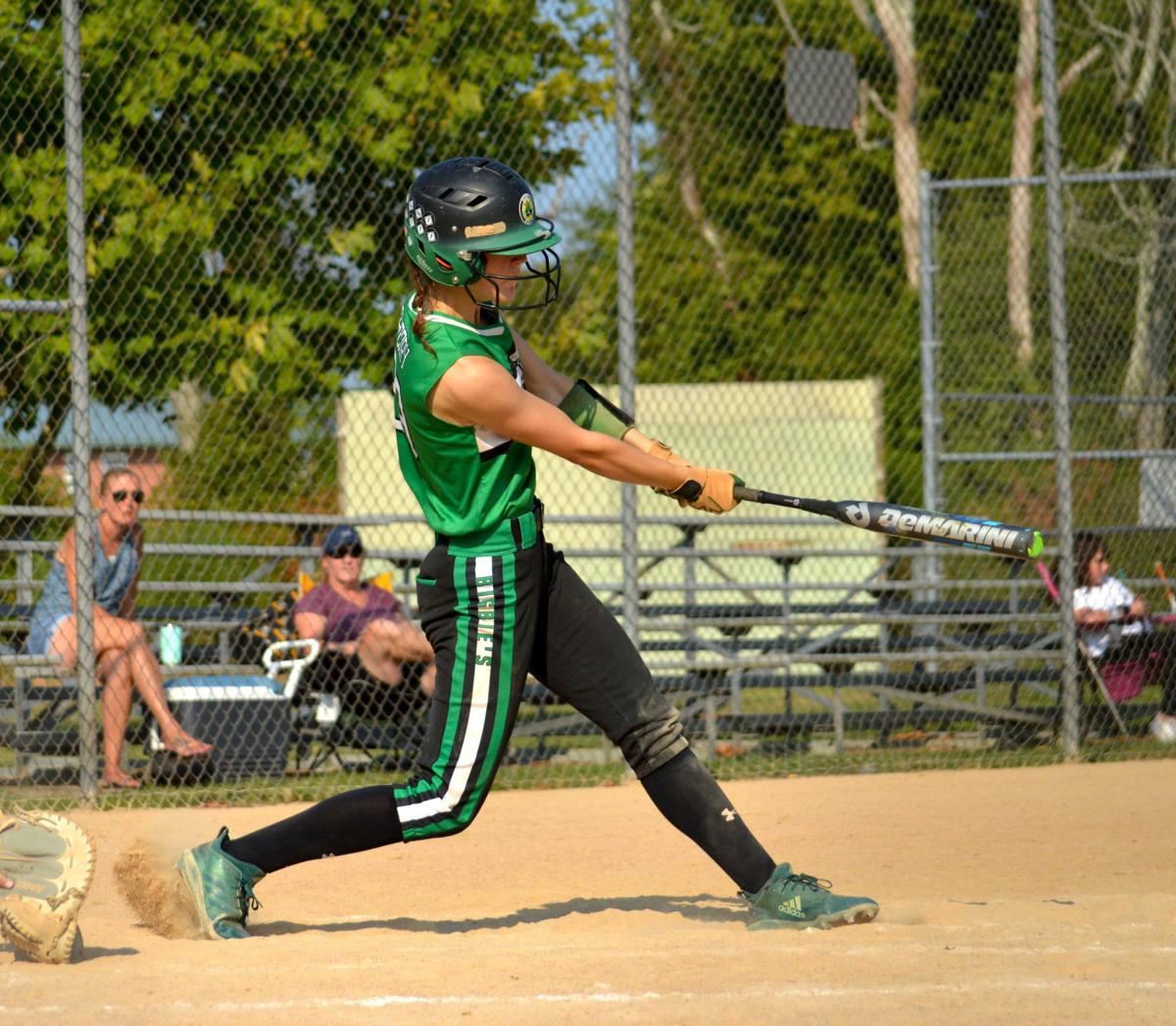 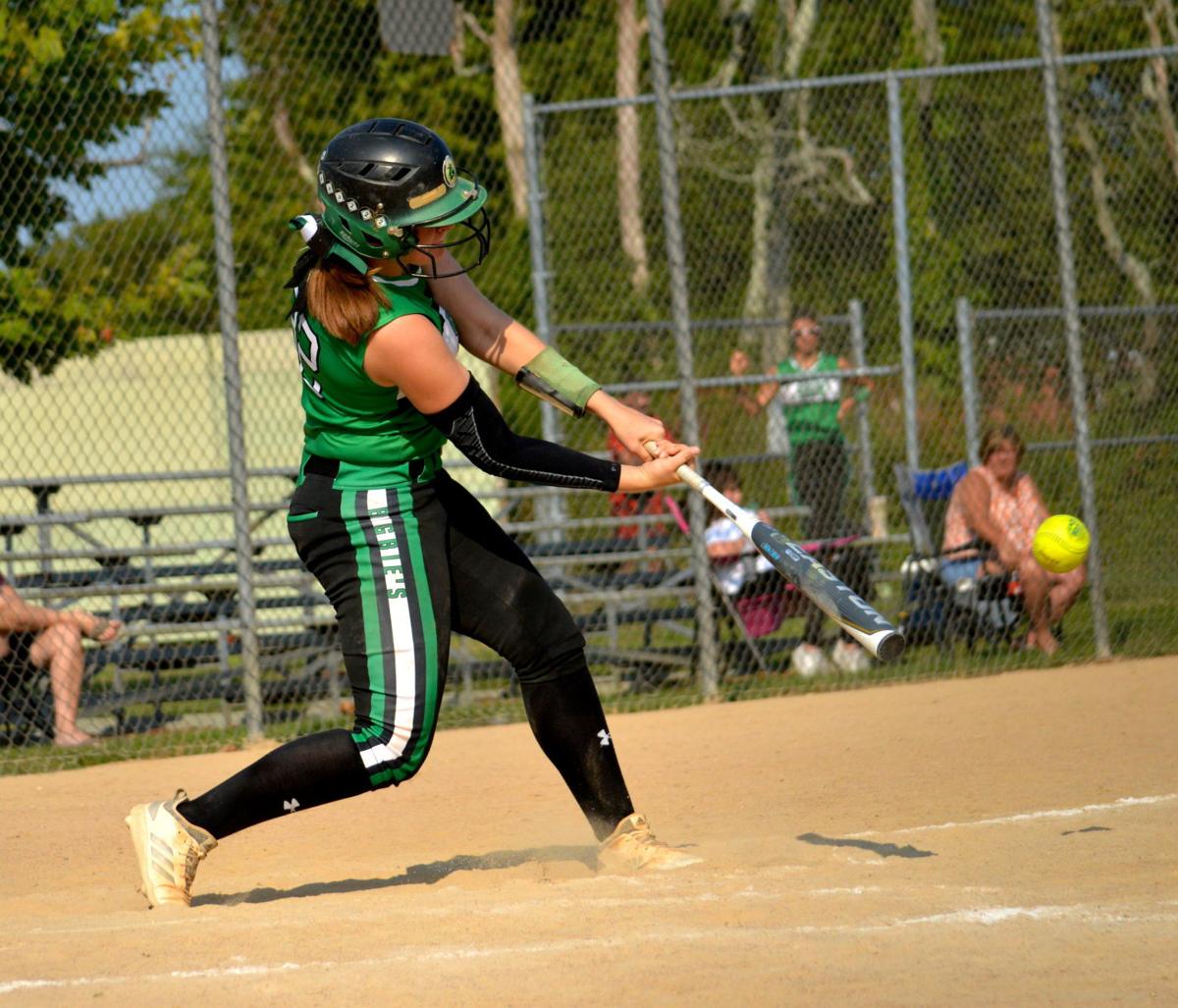 Bigbie's Black Sox catcher Hannah Romanick strokes a double to the fence in the USSSA World Series in Salisbury on Wednesday. 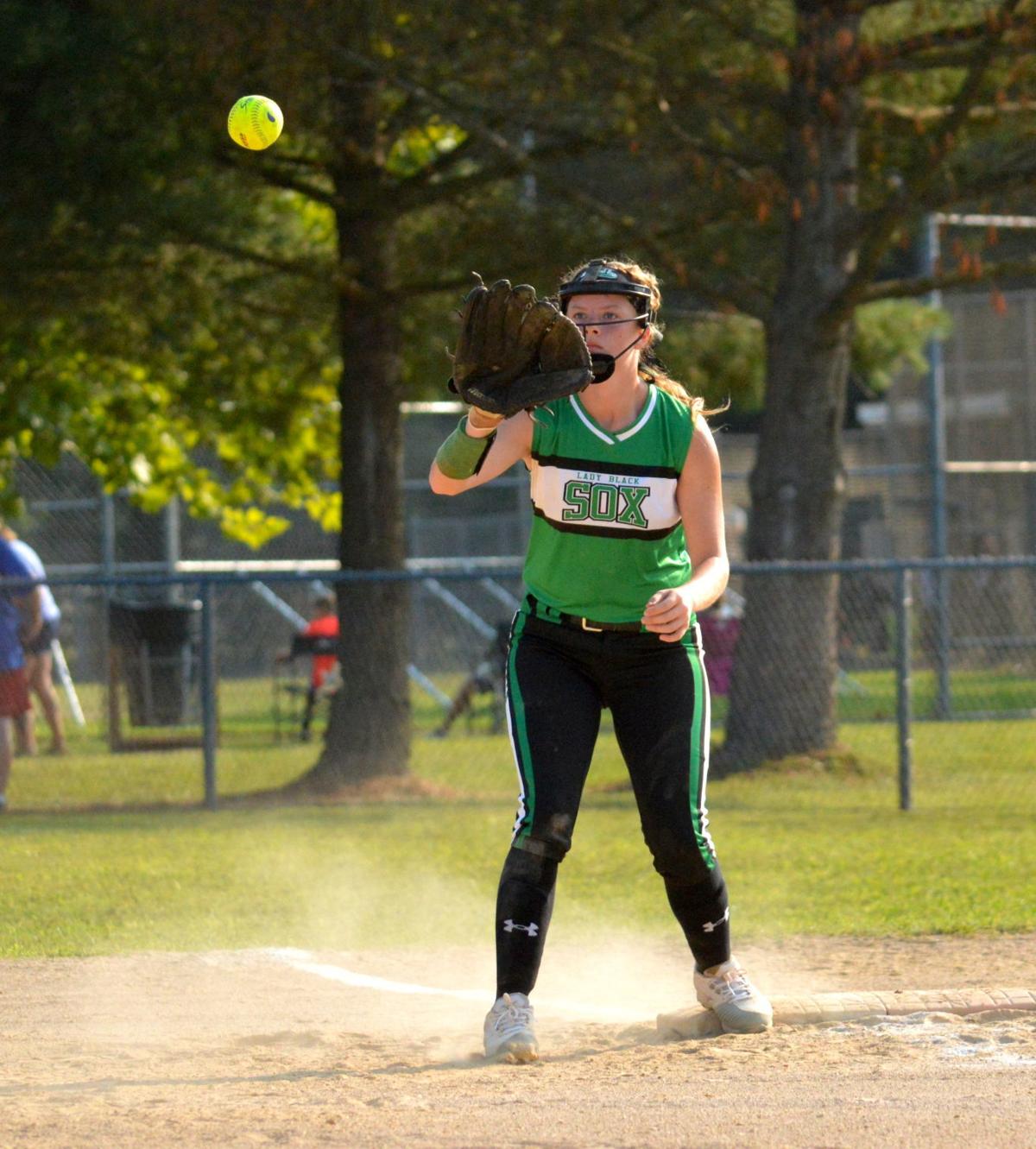 Bigbie's Lady Black Sox first baseman Danielle Mills makes the catch at first for an out in the USSSA World Series in Salisbury on Wednesday.

Bigbie's Black Sox catcher Hannah Romanick strokes a double to the fence in the USSSA World Series in Salisbury on Wednesday.

Bigbie's Lady Black Sox first baseman Danielle Mills makes the catch at first for an out in the USSSA World Series in Salisbury on Wednesday.

The Lady Black Sox started strong in their opener, but ultimately fell 8-5 to the Sluggersville Blue Diamonds.

Ali Cherry (3 for 3) scored the game’s first run in the top of the first on an RBI single by Danielle Mills (2 for 3). Sincere Taylor (1 for 2) scored the inning’s second run after Kattie Hutchison (1 for 2) grounded out to third base.

The Blue Diamonds took an 8-2 lead in the bottom of the fourth.

The Black Sox scored three runs in the fifth inning. Hannah Romanick led off with a double to the fence, then stole third. Belle Fields walked. Cherry plated Romanick and Fields with a double, and scored the inning’s final run on a passed ball.

In Game 2 of their pool play, the Black Sox used a nine-run first inning to defeat the Rochester Rattlers, 9-6.

Cherry led off the bottom of the first with a single. Taylor followed with a double and Mills’ infield single loaded the bases. Cherry scored on Hutchison’s RBI fielder’s choice for a 1-0 lead.

Towers plated Taylor with a single to right. Mills scored on an error before Kierstyn Tilley drew a bases-loaded walk for a 4-0 Black Sox lead. Chloe Warrell plated Towers and Rogers with a two-run single. Tilley then scored on Tara Wozniak’s fielder’s choice for a 7-0 lead. Fields plated Warrell and Wozniak with a two-run single to cap the nine-run inning.

Morgan Rogers pitched the top of the first inning for the Black Sox and Harrington pitched the final three innings, allowing four runs in the fourth and two in the third.

The Black Sox fell 6-4 in their final game to the Oswego Outlaws.

The Black Sox scored a run in each of the first two innings. Taylor walked in the top of the first and advanced to third when Mills singled. Taylor stole home to give the Black Sox a 1-0 lead. The Outlaws tied the score in the bottom of the first.

Romanick belted a double to the fence to score Wozniak to give the Black Sox a 2-1 lead in the top of the second.

The Outlaws took a 3-2 lead with two runs in the second, and increased their lead to 4-2 in the third.

The Outlaws regained the lead for good in the bottom of the fourth with two runs.

The Lady Black Sox are slated to open bracket play against Adirondack USSSA Pride today at 8 a.m. at the Henry S. Parker Athletic Complex in Salisbury.

16U B World Series

The Breeze posted a 5-4 victory over the Hudson Valley Titans, then followed with a 5-1 win over the Tri-County Thunder.

In the first game, Grace Buchanan singled with one out in the top of the first. Emily Darling’s single advanced Buchanan to third. Chloe Callaway plated Buchanan with an RBI single to left for a 1-0 lead. Courtesy runner Hannah Moore then scored on a wild pitch for a 2-0 lead.

The Titans scored three in the bottom of the first to lead 3-2. The Breeze tied the score at 3-3 in the fourth on Reagan Miller’s RBI single.

The Breeze took a 5-3 lead in the fifth. Moore (2 for 2) plated Ava Carels with a single to right. Olivia Christopher scored on a Miller fielder’s choice, pushing the lead to 5-3. The Titans could only score one run in the bottom of the fifth. Moore picked up the win in the circle for the Breeze.

In the second game, Darling stroked a two-out double and scored on Callaway’s single for a 1-0 Breeze lead in the first inning.

The Thunder tied the score, 1-1, in the bottom of the inning, but the Breeze went back ahead 2-1 on Miller’s RBI single to left in the top of the second.

In the fourth, Callaway plated Moore and Erica Barrow with a single for a 4-1 lead. Christopher (3 for 3) extended the lead to 5-1 with an RBI single.

The Breeze are scheduled to face the Pocono Pride 16U Red at 9:40 a.m. today at East Wicomico Little League in Salisbury.